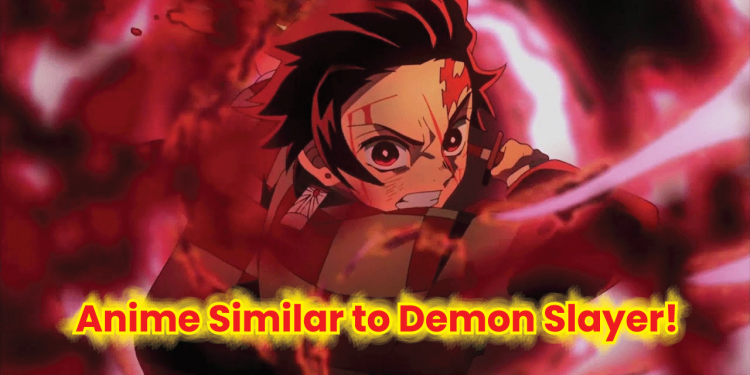 Demon Slayer: Kimetsu no Yaiba sculpted its name on the hearts of so many anime lovers, and many people rewatch it.

Since you’ve loved it so much, how about watching an anime like Demon Slayer? Here’s the perfect list for you.

Contents Hide
Anime like Demon Slayer!
7. Inuyasha
6. Seraph of the End
5. Ao no Exorcist
4. Nura: Rise of the Youkai Clan
3. Toilet Bound Hanako-kun
2. Dororo
1. Claymore
A Word from Us!

A normal high school girl named Kagami falls into a well and soon finds herself transporting back in time to the feudal Japanese era.

There she meets a half-demon, Inuyasha, who is in search of Shikon Jewel. Will she tag along with him on the journey?

Inuyasha is a classic of the 2000s, and if you haven’t watched it yet, it’s not too late because it is a gold-standard anime.

Like Demon Slayer, it has a supernatural theme, sword fights, and overall, the bottom line of both anime shows is “Supernatural vs. Human.”

6. Seraph of the End

Earth gets invaded by bloodthirsty vampires after a mysterious virus kills every adult on the planet. Yuu and his friends become the livestock for them.

In an attempt to escape from their claws, every one of Yuu’s friends gets slaughtered. Enraged Yuu finds hope from humans and trains to avenge.

Seraph of the End has some incredible action sequences, although they might not be on par with Demon Slayer.

Both anime series deal with bloodthirsty entities and have some intense sword battles. Thus, it is an anime like Demon Slayer.

Rin Okamura leads an ordinary life as a student, and through an encounter with a demon-possessed boy, he awakens his sealed powers.

In the process, he learns the truth that he is the son of Satan. What will he do? Will he join Satan or fight against him to protect the earth?

Ao no Exorcist is an urban fantasy anime with some cool action scenes along with a unique premise.

Both anime series deal with demons, Mc becomes strong from zero, and both care for their siblings a lot.

4. Nura: Rise of the Youkai Clan

Rikuo Nura is the young master of the Nura clan treated his clan as a family until he found out the dark truths about it.

He swears not to become demons like his clanmates and tries to live as a human. But is it going to be that easy?

I see many similarities as well as differences in this anime compared to Demon Slayer. Both MCs fight against demons and use sword skills.

Setting in feudal Japan period, this anime provides as much entertainment as Demon Slayer. So, it is a must-watch.

Kamome Academy is filled with mysteries, and the most popular one is about a ghost lurking in their school building.

When occult-loving Nene Yashiro tries to uncover this truth, she ends up meeting Hanako-kun, a ghost, and her life changes entirely.

While Demon Slayer takes action and violent route, this anime shows you a funny side with supernatural interactions.

If you love to watch an anime like Demon Slayer, then probably Toilet Bound Hanako-kun might suit your taste.

The story takes place in Japan, where Lord Daigo sacrifices his own son to the demons for the prosperity of his lands.

Years later, a young thief named Dororo finds “Hyakkimaru,” who is on a journey to find a reason for his life.

Dororo is a classic and underrated anime because most people judge it without even watching it. It has a wonderful premise and delivers it perfectly.

For some reason, it gives me similar vibes to Demon Slayer, and it is really a must-watch.

Claymore sets in a world where humans feel the terror of yoma, man-eating monsters. To slay these monsters, some people call themselves as Claymores exist.

Clare is one of the low-level Claymores, and on her journey, she finds a person named Raki who gives her a reason to live and helps her along the quest.

If you look at the plot, you can already feel the similar vibes in it. Both have demons that feed on humans and people who fight against them.

Although Claymore is a bit darker than Demon Slayer, it is pretty similar in terms of plot and other aspects like characterization.

Well, here is the completed list of anime similar to Demon Slayer, and I think you’ll love every anime as much as you did with Demon Slayer.

So, what are your thoughts on Demon Slayer? Let us know what you think in the comment section below.

One Piece Anime Review: 7 Things That Make It a Legendary Series!

One Piece Reveals an Epic Key Visual for Episode 1000! Luffy vs. Kaido!