13 Hot Anime like High School DxD to Give You Nosebleeds! 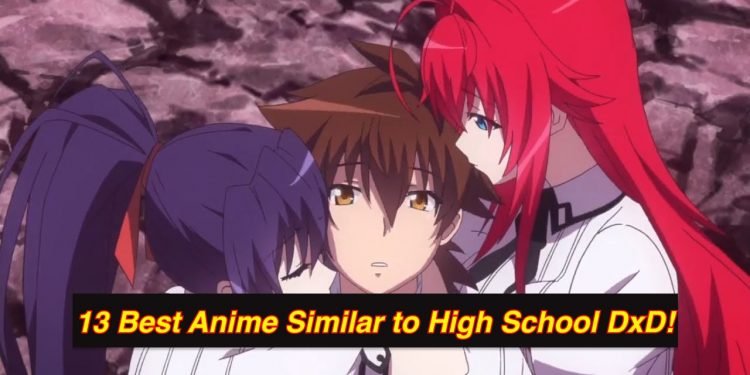 High School DxD is a very popular ecchi, harem, and romantic comedy with supernatural elements. Issei, a high schooler with a perverted nature, was killed by an angel and reincarnated as the devil with some superpowers.

If you liked the anime and want to watch anime similar to high school dxd, then here’s a list that will help you find them. Animes in the list have all the elements of High school DxD and are very similar in nature.

Ryosuke Kaga meets Shinigami, a Goddess of Death. However, she doesn’t kill him like any other shinigami. Instead, she sucks him dry of spirit and drains his ability to enjoy his teenagehood. Goddesses of Death is not going easy on him in any condition.

12. HighSchool of the Dead

The dead began to rise, and it was total chaos. High school students are overwhelmed with the start of the zombie apocalypse.

Takashi and Rei band together to find friends and family, also to find what started this apocalypse. But will the journey be easy?

‘HighSchool DxD‘ and ‘HighSchool of the Dead‘ show an ambitious person who will do anything for his goals. Both have comedic or perverted main characters and have a harem who would love to make out with him.

Both Subbed and Dubbed versions are available in the link below!

Aikawa is a 16-year-old high school student who was murdered while he was investigating a suspicious house. But he wakes up as a zombie and he is immortal.

So he decides to hunt down his killer. He also acquired some magic powers on the way and the responsibility to execute monsters who terrorize the humans.

Both anime have strong females and an MC who has the potential to be very powerful.  In both series, the male lead is romantically interested in their master and stops at nothing to ensure the safety of said master.

Tomoki Sakurai’s life changes when an angel falls from the sky and starts calling him master. It follows the daily life of a high school club and how they find about the presence of other species among humans.

Both are set in a similar school setting; both have perverted MCs, beautiful girls, and great fighting scenes. In short, both are great fun to watch; Sora no Otoshimono also has angels which give it a supernatural element that makes it a High school DxD like anime.

When sai finds out that he will become a demon king according to his assessment test, his life gets twisted. Almost everyone hates him at school, with few exceptions.

But he wants to change the world for good. With his new powers, Akuto must cope up with his misfortune and fight to prove that his fate is not set in stone.

Both share the Demons/Angels/God theme, both are Ecchi similar to High school DxD, both have action, and the MC isn’t stupid at all.

When a quake around Thirty years ago destroyed a continent and killed nearly 150 million people. Itsuka is an average high schooler who lives with his younger sister, Kotori.

When a similar quake came, he rushed to save his sister and got caught in the eruption. He found a girl and later he decided to date her.

Date a Live is a very similar Anime to High School DxD. Both are great harems. Both are romance-based anime where MC fights to save his female lead. Both the series have a great plot and good fan service.

Both Subbed and Dubbed versions are available in the link below!

Rito Yuuki has a crush on Haruna Sairenji, his classmate and his love interest since junior high. But to make his life more difficult, one day comes this alien princess who ran away from his marriage and met Rito. To avoid an unwanted political marriage, she is ready to marry Rito.

Both main male characters are surrounded by girls and mainly focus on the harem. Also, both anime have supernatural elements in them, making them very similar to each other.

To bring back his cousin and undo the collapse Phenomenon, Arata enrolls in the Royal Biblia Academy. There he found six other magic users.

To save Hijiri with the help of his newfound friends, Arata stops at nothing to prevent the destruction of his beloved hometown.

The main characters are very similar in both the anime; they don’t give a thought about what they say. Both shows have harems, magnificent action scenes, and a lot of dirty jokes.

Both anime have strong leaders who work towards their goals. If you have seen one of them, you will like the other as well.

Shy and awkward, struggling at academics yet brilliant teenager meets a humanoid girl because of his destiny who drags him into the high-stakes world of the Sekirei, where he and his new partner must compete against others in a battle for survival.

One main similarity in both the anime is that the MC is surrounded by a lot of pretty girls, and all of them are stronger than a normal human being, fighting with magic and superpowers. Both series are harem-based with a lot of fan service to keep your eyes open.

Godou is stuck with the unwanted position of Campione!, or in other words, known as God Slayer. He has to fight gods who don’t follow their duties and rules.

With lots of immortal affairs, deities are clashing, and romance, this anime is definitely similar to High School DxD.

One of the main similarities is that the MC is surrounded by a lot of pretty girls. Both the series show the use of magic. Both series are harem-based with a lot of fan service to keep your eyes open.

3. The Qwaser of Stigmata

What would you do if you had the power to control an element? Seikon no Qwaser is… a unique concept.

When Tomo’s father disappeared and left only a piece of art called the “icon.” after his disappearance, a rumor started that female students were being attacked.

As Tomo and her sister, Mafuyu, average school life has begun to suffer; they need to find their dad too. Both are ecchi with loads of action, decent characters, and a good plot.

If you like Seikon no Qwaser, you would definitely love High School DxD.

2. The Testament of Sister New Devil

When Basara’s father brought home two beautiful girls as his new siblings, he has no choice but to accept them into his family.

But Mio and Maria’s true forms are actually the newbie Demon Lord and a succubus. And Basara is from the clan of Heroes who are the sworn enemies of demons.

It involves a Red Head demon who is in a relationship with a guy; both animes share almost the same genre, except in High School DxD, the Red Head is the master, and in this series, she is the slave due to some reasons.

Aono gets enrolled in Youkai Academy, which seemingly is an ordinary boarding school, except it’s not. It’s a school of supernatural beings like demons and vampires.

Also, no one likes humans there; he’ll be executed if it is found that he is a human. He also falls for a vampire girl, but he doesn’t know about it.

It’s a supernatural school comedy that explores romantic exploits, experiences, and misadventures with a bevy of beautiful but dangerous creatures of a high schooler, making it a High school DxD like anime.

Both are ecchi anime with a focus on supernatural beings. Both have a very similar art style; both are humorous and have great characters.

Romance animes are good, but a bit of ecchi with a pinch of supernatural elements makes them fun to watch, and it gives the author various setups for comedy too. High school DxD is one example, and this list contains various.

If you think there could be some other anime or we missed something, let us know in the comments and share this article with your new weeb friends and be their senpai.

Top 25 Greatest Manga of all Time! [Never Miss These Out]

The Rising of the Shield Hero: An Irresistible Isekai Gem! (Season 1 Review)