13 Fabulous Anime like Sword Art Online to Completely Immerse You! 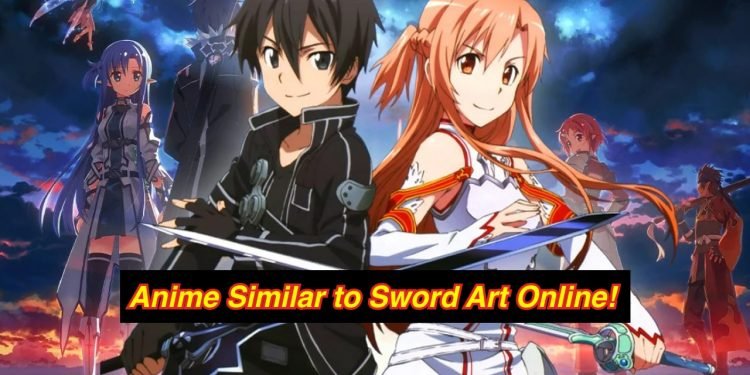 “Sword art online is the best MMORPG anime that has been made in the last few years. The story revolves around Kirito. Who just got his gear for this new game. He was among the first ones to play. Also, among the first ones to be trapped in that reality. Now the goal is to reach level 100. To get out of the game, but the twist is that if you die in-game, then you die in reality.”

If you are looking for some adventure and Sci-fi anime similar to sword art online to watch, then this list is for you. Here are some anime from the adventure, sci-fi, and MMORPG genre.

Contents Hide
Anime like Sword Art Online!
13. Btooom!
12. Re: Zero -Starting Life in Another World
11. Angel Beats
10. In Another World With My Smartphone
9. Maoyu~Archenemy & Hero
8. No Game No Life
7. Grimgar of Fantasy and Ash
6. Is It Wrong to Try to Pick Up Girls in a Dungeon?
5. Death March to the Parallel World Rhapsody
4. Accel World
3. Hello World
2. Overlord
1. Log Horizon
Conclusive Thoughts!

This is a fantastic anime but the complete opposite if you are looking for someone trapped in a game. This is the story of Ryouta, who is known for an online game he plays.

But everything changes for him when he wakes up one day and finds himself stranded on an island only way to get out is to kill seven other players.

Not being an MMORPG, this anime still has many similarities, like being stranded in an unknown place. Have to kill others to get out and a crazy maniac who plans this all.

It’s not in the virtual world, but it has the same rules, Kill or get killed.

12. Re: Zero -Starting Life in Another World

Redoing things is just a fantasy for humans but for Natsuki, it has to turn into reality when he was killed brutally. He awakens where all this was started. His everyday life was dropped into a fantasy world.

A fantasy world with action themes of what it’s like when a real person is thrown into what feels like a game. That’s why Re: Zero is an anime similar to sword art online.

If you like SAO, then this anime will feel very satisfying.

Few teens fight to keep from being taken to the next level in the realm of the afterlife. Otonashi awakens and learns he is dead and he can only remember his name.

He meets with a girl named Yuri explains that they are in the afterlife. Yuri leads a group called Shinda Sekai Sensen, which fights against a girl named Tenshi.

In both series, the characters are trapped in a world where they don’t want to be. They try to regain their freedom.

If you like romance, then there are brownie points for you. Both of them also involve a love story.

10. In Another World With My Smartphone

We all want one chance to format our phones before we die. But what if you are allowed to carry your phone in the next life. Touya was granted this wish as he was killed in an accident by mistake. He starts his new life in a new world filled with magic and a lot of companions.

Both the anime are set in another world. Both the MCs are popular with girls and have some special skills. If you are looking for some romance-filled adventures with comedy, you should try this.

Set in a fantasy world where a war has been going on for the last fifteen years between humans and demons. To end this war, Hero and the Demon queen decide to ally with each other and set off to the human world to stop the war.

SAO and Maoyuu are two series taking place in a fantasy realm. They both involve war and politics. There is also some drama, comedy, and hints of romance.

This is a fantasy world anime where there are no wars. Disputes are solved by playing games. Two siblings find themselves teleported to another world. They decide to take down the god of the game and take his position.

Both the main characters were transported to another world.  Where ‘No Game No Life’ is more of fanservice comedies and vibrant colors, whereas ‘Sword Art Online’ is focused more on the hardship of the main character and everyone else around him while developing strong romantic relationships along the way.

While the storylines are different for both the anime. The crazy and fun games of ‘No Game No Life’ are something to smile about.

7. Grimgar of Fantasy and Ash

Left in an unknown place without anything, not even their memory. Some strangers found themselves with only one choice and, i.e., to join an army and help maintain peace.

The setting is like a game, but it’s no game. You’ll be killed if you don’t kill.

Unknown strangers find themselves in strange fantasy land fighting for their lives, making new bonds, and finding the reality of that new world. Definitely, a great watch if you want something like SAO.

6. Is It Wrong to Try to Pick Up Girls in a Dungeon?

Set in a fantasy world. This anime shows what if gods and humans lived together. Life is never dull in this world, especially for Bell, who wants to become the greatest adventurer in the land. With Hestia, who is a goddess, he might actually become a great adventurer.

There are many similarities with SAO. Even the voice actor o the protagonist is the same. Both require leveling up and battle strategies and a higher difficulty with every level.

Even if you are not looking for similarities, you’ll definitely find humor and romance in abundant to make you feel good.

We all want to be the Hero of our own stories. But for Satou, it becomes a reality when he wakes up in a fantasy world mixed with all the games he was working to fix. He has maxed all his stats and now just wants to adventure this new world.

Death March has many similarities with SAO, like the main character ending in a fantasy world which is a game. But in Death March, the protagonist is very overpowered in comparison to SAO.

Arita is oversized, gets bullied in school but finds solace in playing online games. But when all his high scores were topped by the student council’s vice president, his life was changed completely.

He was then invited to “Brain Burst,” a program that allows the users to accelerate their brain waves by playing an augmented reality fighting game.

The Vice president wanted to find the reason for which Brain burst was created. And in return, Arita will get rid of his bullies.

Just like SAO, it involves the idea that you enter a world that is virtual reality. They have similar art styles. Both the series have real-world repercussions, but one has more drastic than the other.

Set in 2027Japan, ‘Hello World’ is set in another world, which is just a storage device that replicates real-world events by recording them. Naomi, to change what happened in the past comes back to help himself to prevent a tragic incident.

Both the anime are the works of the same director and happen in different worlds where the protagonist has some supernatural power.

When a popular game was being shut down in its final hour, its characters and NPCs started to develop their own personalities. Momonga, with his loyal servants, takes control of this new world, figuring out why this happened.

The story of this anime is similar to sword art online. A popular MMORPG game traps its players inside, and the players now have to play the game where the consequences are pretty accurate.

The only difference is that our protagonist loves to play the antagonist.

In a second, thousands of gamers were stranded in a game called Elder tale. Shiroe must learn to live in this new world.

Shiroe is a socially awkward college student whose confusion and shock last only a moment as, a veteran of the game, he immediately sets out to explore the limits of his new reality.

A tale of fantasy, adventure, and politics, Log Horizon, explores gaming elements through the eyes of a master strategist who attempts to make the best of a puzzling situation. A definite watch if you are looking for sword art online, like anime.

So, these are some of the best anime shows similar to Sword Art Online. If you have loved SAO’s concept, I’m pretty sure you’ll find these amusing. Just give them a try, and you’ll know.

So, what do you think about the list? Do you know any other anime that can take a spot on the list? Let us know what you think in the comment section below.

Top 10 Best Selling Manga in Japan Have Been Officially Revealed for 2021!

Netflix Announces to Stream Spriggan Anime in India from June 18!

Top 25 Best Anime with Op MC You Should Consider Watching!