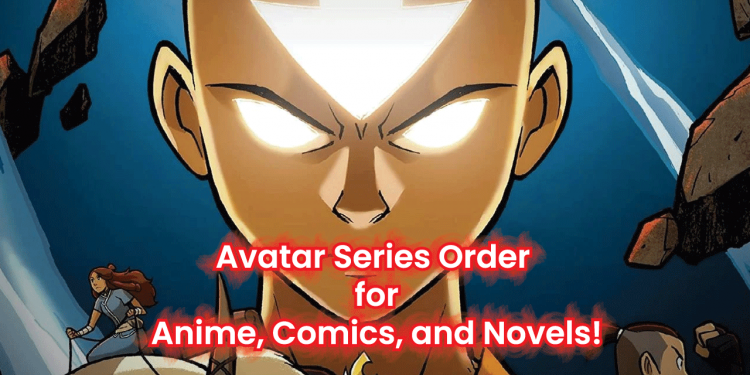 Avatar: The Last Airbender is a legendary anime that we used to watch repeatedly during our childhood (at least in my childhood).

Not just anime but its comics and novels are super entertaining. Gladly, I binged every one of them, and here’s the order that you need to follow before getting into it.

Remember that Graphic Novels and Comics are both similar and include artwork, dialogues following their storyline.

The Lost Adventures is actually an anthology compiling of previously unpublished comics. These are a must-read because the events take place in between the episodes of TV series.

But if you want to avoid any spoilers, we suggest you read it after watching the series. If you’re not interested in watching it, it’s completely fine.

While “The Lost Adventures” is the first anthology of the series, this one is the second anthology that includes Free Comic Book Day issues.

Most events in this one take place during and after the television series. So, it is better to read them both together.

The Promise takes place after a year before the end of the television series, and it should be read after the anthologies.

It consists of three parts:

As the title suggests, it depicts the tale of Zuko, who goes on a quest to find his mother, Ursa. It also has three parts:

Rebound‘s story takes place after the events of “The Search,” and chronologically, you should read it before “The Rift.”

It doesn’t have any multiple parts and officially available online for free.

The Rift trilogy comes back to the main story of Aang and his friends. You can read it after “The Search.”

Shells is another Free Comic Book Day minicomics besides “Rebound” and “Sisters.” It is not necessary to read it here, but chronologically it makes sense.

Smoke and Shadow brings an epic tale for you by making Aang and Zuko team-up. It also has three parts:

Sisters is also a minicomic by Free Comic Book Day, and you can read it either after “Rebound” and “Shells” or right after Smoke and Shadow.

North and South deal with the events that take place in the village of Southern Water Tribe and focus on Katara and Sokka. It consists of three parts as well:

This Trilogy focuses on Aang and his team on how they face the conflict between benders and non-benders.

The Legend of Korra Comic Order!

As you know, The Legend of Korra is part of the Avatar universe. So, I’m just going to mention it here, but it’s up to you to read or not.

It is a Free Comic Day minicomic, and once you’re done reading Avatar: The Last Airbender comics, you can read this one.

It introduces the main character Korra, and it is a pretty good one entertaining you a lot.

The place where the journey of Korra begins and where the epic tale continues. Turf Wars consists of three parts in total:

Lost Pets features Avatar Korra, who pairs with a sidekick, and it involves the story of tracking down a pack of lost pets.

4. Ruins of the Empire

Ruins of the Empire follows the events of Turf Wars trilogy and you can read it once you’re done reading Lost Pets.

The three parts are as follows:

Watching Avatar isn’t that complicated because it has only fewer seasons and a sequel. So here is the order you can follow before watching it.

Each season in Avatar is referred to as “Book,” and consists of three books making it a three-season show.

2. The Legend of Korra

The Legend of Korra is the sequel of Avatar that sets 70 years after the original events. It split into four parts:

If you want to grasp the complete story of Avatar without any complications, then we suggest you read these two novels.

Avatar franchise is vast if we go through the comics and novels, but when you watch both the anime shows, you won’t feel it that way.

In any case, if you had doubts on how to watch/read Avatar and The Legend of Korra, this article will make sure to clear those.

So, did you find what you’re looking for? Let us know what you think in the comment section below.

Founder and CEO of Anime Ukiyo! You might call me an anime geek as well but that doesn't count since I'm much more than that. Anime has become my passion, and in the process of loving it more, I ended up creating this blog that covers more than 10 lovable anime-related topics!

Dororo: 7 Reasons why You should watch this Classic!