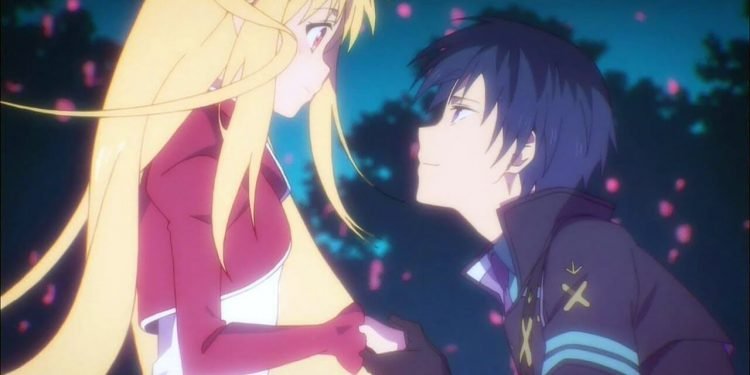 So, what are the best action romance anime shows? Although it’s pretty hard to define, we’ve compiled a wonderful list for you.

Mysterious spatial quakes have been plaguing the world for a while now and the reason for it being, women who are known as “Spirits.” When a normal high schooler named Shido Itsuka discovers it, he also finds out the solution: make them fall in love with him and stop the disasters.

Date a Live is a harem romance anime with some good action sequences. Although it has fan service and falls more into the romance category, you won’t regret your choice of giving it a watch.

In a realm parallel to Earth, lie grotesque monsters who seek to devour humans and to protect them, exorcists give it their all. The story follows Rokuro and Adashino, to whom an oracle bestows the title of “Twin Star Exorcists.”

Although it might seem as this story is a little complicated to follow through, you’ll enjoy it thoroughly if you jump into it without too many expectations. It spares you enough battles to get through the episodes, and the chemistry between the duo is terrific.

Oboro and Gennosuke belong to two opposite ninja clans who are barely maintaining peace between each other. Both of them vow to reconcile the clans with their marriage, however, a war broke out soon enough. What’s worse is, both Oboro and Gennosuke are leading their clans. Can they still stay true to their love despite the rising death toll?

Basilisk is the best produced action romance anime we’ve ever seen. It conveys perfectly how people in love had to go through various obstacles if the circumstances don’t favor them. It has plenty of action and romance to keep you occupied until the end of the series.

Yuki spends his days writing in his diary, but little did he know, the very diary could change his life. He finds diary entries in his cellphone for the next ninety days, and what’s more—there are other future diary owners like him who he had to battle to death to survive.

Although Future Diary is a bit of disturbing anime, you can’t deny the fact that it is one of the best romance action anime. While the premise solely represents a battle royale, there is a crazy and obsessive female lead who does anything for Yuki.

Tatsumi leaves his poverty-stricken village to accomplish something in the Empire. Although his thoughts were that the Empire treats by justice, he realizes the truth when he meets a group of assassins named “Night Raid.”

Akame ga Kill is quite a painful anime to watch, but along with it, you get some stunning battle scenes and some delightful romantic interactions between the characters. You’ll have more than a few characters to ship and a lot of massacre-themed fights to push your adrenaline to higher levels.

Every ten years, a war between seven mages takes place, and each one summons a mythical hero to fight for their cause. The winner gets to make a wish for the grail and without having any idea on this, Shirou gets entangled in this great Holy War.

Although Fate falls, 90% towards action and only 10% gives you space for romance, it is worth watching every second. Ufotable, the god-tier animation studio, turned this story into an unrivaled action movie. If you haven’t watched fate series yet, we highly suggest you do, as you’ll find both action and romance in it.

The kingdom of Liones gets occupied by the Holy Knights who swore to protect it. The Princess Elizabeth embarks on a mission to search for the Seven Deadly Sins, who seem to be the only one to have a shot at saving her kingdom.

Despite totally being a not relatable premise to the action romance anime genre, Seven Deadly Sins is a ride you don’t want to miss. It can offer you never seen action sequences and at the same time, one of the best and most painful love stories to date.

Ryouta is a good-for-nothing young boy who plays Btooom! game all the time. Later on, he wakes up on an island without a clue on how he got there. It seems many people have been brought here, and they have to play a battle royale game with Btooom’s game theme to survive.

Btooom! is the pure definition of how well an anime is made, with immense amount of action and romance. You have an extremely intelligent main character and a beautiful female lead. Although it only focuses on action aspect initially, it melts your heart with romance in the end.

The ordinary life of Sakai Yuuji changes when he gets saved by a red-haired girl. He’s suddenly able to see flames of life, which determines the people’s lifespan. Unfortunately, Yuuji has been dead during his encounter with a monster, and the only thing keeping him alive is the blue flame in his chest.

Just another supernatural story with an ordinary plot. It does seem like it from the premise, but deep down, Shakugan no Shana is a fantastic action romance anime. If you can appreciate familiar concepts executed in a skillful way, this show is for you.

Set in a futuristic world, a virus breaks out and GHQ, who is in place of taking care of it, takes the control. Shuu Ouma spends his days alone at his home until one day, he meets a pop idol, Inori, who is being pursued by GHQ. After acquiring a mysterious power in the process, now he’s left with two choices: fight against GHQ or go back to his normal life.

If there is a ‘feels‘ rating term for this anime, it’d get 10/10. Guilty Crown is a great mixture of action and romance which easily stays apart from the other anime shows on the list. Although it leaves a couple of loopholes in the end, it’ll leave you satisfied.

In the far future, hover cars have taken over the world and wheeled vehicles are basically extinct. “Sweet” JP lost in the yellow line race due to the dirty tactics and somehow got a ticket to participate in the Redline race. Can JP go for the glory whilst facing numerable obstacles?

Redline doesn’t have the best story, but we assure you, it shines in almost every other aspects. Especially, the animation is terrific to the point you’ll notice all the minor details with just a single glance. It has plenty of action and romance with a cute female lead.

1. Darling in the Franxx

Set in the distant future, the humanity has been driven to extinction by giant beasts known as Klaxosaurs and plantations are the only means of safety. Children raised inside pilot giant mecha robots known as Franxx.

Hiro wants to operate one such mecha but fails in the aptitude test. However, during an encounter, he comes across a mysterious girl named Zero Two, who becomes his partner. Could this encounter change his life?

Darling in the Franxx is nothing short of a masterpiece when it comes to action and romance. It balances both the aspects perfectly and makes you fall in love with the female lead. Its popularity speaks for itself, and if you’re looking for some best action romance anime, watch it.

There you go—The best action romance anime of all time. If you’re either into action or romance genres, you’ll love most of the titles on the list.

So, what is your favorite romantic action anime? Do you think any other anime deserves a spot on the list? If so, let us know your thoughts in the comment section below.

New Console Neptunia Game Will be Revealed by Compile Heart on August 19!