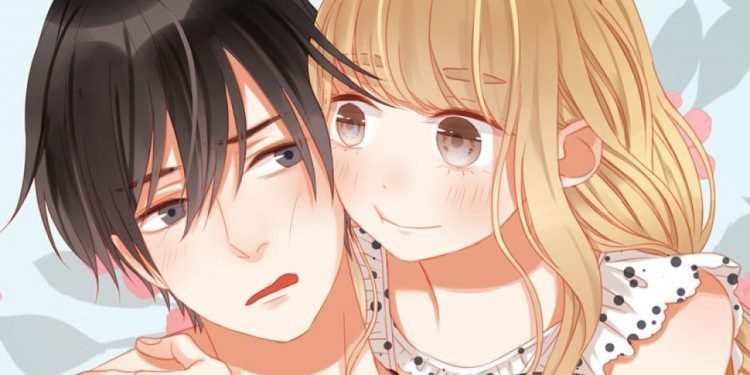 Some of them might be disturbing or enthusiastic. So make sure to be prepared before you get into any one of them, and they’re fantastic adult manga recommendations for sure!

Ryou Hatsuhi secured his dream job at Takebou Commercial and his girlfriend at BNB Corporation. These both companies are rivals, and they strictly forbid any relationships between each other’s employees.

Since Ryou and Minori love each other a lot, they decide to keep their relationship secret from the companies. But as the situations arise, they must face a lot of obstacles.

One thing I like a lot about this adult manga is it tries to commit adultery in every situation possible. It may sound cliche, but you know what genre we’re in, and that’s precisely why you should read it.

The humor in the manga is pretty decent, the artwork is quite eye-catching, and the characters and situations are fascinating. It ends quickly, but even that little time you spend on it will be worthwhile.

Akiyama booked a vacation at Koibana Onsen to visit it with his girlfriend, but unfortunately, they had to break up. Arriving solo, he meets onsen’s three sisters and gets special treatment since he’s depressed.

He decides to stay there and work part-time after falling in love with one of the sisters. In the process, he helps more couples have a pleasurable weekend while getting some good intercourses himself.

The only thing you’ll witness in this manga is sex, at least on the surface. But the things you’ll most likely ignore matter the most in this one.

Henai is one of the six one-shots released by the same author, and the story is about two guys who fall in love with each other. While one wants to roleplay, the other grudgingly goes along with it.

Henai comes with a pinch of humor, and there is plenty of room for the scenes where they make out. Since we mentioned role play in the plot, you must have been excited.

Well, it keeps your heart pumping all the time to see what kinds of things they try with each other. There are some forcible scenes in it, but you’ll love them at a certain point. Overall, it is a good bl adult manga to read.

Daikichi’s life has been filled with despair, but when he moves into an apartment where a girl once committed suicide, it seems to have taken a turn for good.

He discovers her ghost floating around in the apartment. Somehow, he ends up falling for her and physical body or not; they both end up making out every day at every opportunity making their love deeper and stronger.

My Lovely Ghost Kana is a slice-of-life romance manga with many H-scenes that add up with the characters’ feelings. The artwork is pretty good, complimenting the romance.

The characters are everything making you love it over time, and if you can look past the smut aspect, it is a genuinely beautiful storyline. Just read it, and you won’t’ be sorry.

9. My Girlfriend is an Erotica Author

Since no one would want to work for her, Keisuke gets curious about her and decides to stick with her. From this moment on, Shiina would have to bear with the crazy things that come from Chihiro.

In a world where three types of manga exist: Good, Bad, and Mediocre, this manga falls into the mediocre category. The manga is easy to navigate since the artwork is pretty clean and beautiful.

The story follows Satou Kohta, the only man who can save the earth. The Queen of Terror gets sealed in Kohta’s balls in a sealing accident.

The only way to unseal her is by making Kohta ejaculate, and a tsundere loli Elyse has been sent on that mission. But she only has 30 days to do it, and Kohta has no idea what’s going on.

Despite how the manga looks, trust me, it is insanely good. The synopsis is enough to drag you into reading it, but you should also be mesmerized by the artwork and the flow of the story.

It is so unique and, at the same time, packs the right punch to adult manga readers. The ending was highly satisfying, and if you haven’t read this one yet, you’re missing a gem.

Makoto is a virgin and struggles to find girls, and that’s the only reason his parents set him up with a girl of his age (25). After meeting each other, he was hesitant, but she asked him out on a date after a few days.

Everything worked out really well, and they got married, went on a honeymoon. The only problem is that Makoto never has intimacy with a female body. How is he going to satisfy Yura?

The whole premise might look ordinary, but this is rather an exciting manga. It is informative and gives you a lot of knowledge about sex, and explains how the situation fares between the people who experience sex for the first time.

The story is kind of cheesy, but after a few chapters, you’ll get addicted to it. If you’re looking for a unique adult manga with informative context, this one is for you.

The story sets in an alternative Japan where the society is at war and the government has legally passed a law. If somebody kills your loved one, you’re allowed to hire someone to kill them.

Since not everyone can murder someone, the victims had to hire people who specialize in doing so. Basically, the whole manga is set around a character specializing in these killings.

The reason why manga is marked as “adult” is that it has intense murders, drugs, rape, and mentally ill characters. It is not for the unmatured ones, but it is a great choice if you can withhold the violence.

It delivers a great message as “we’re not living in a perfect world,” and the characters have a spectacular development. If you’re looking for an adult seinen manga, then read this one.

Shizuka went to hot springs alone on his twentieth birthday and happened to see the first naked girl in his life. Soon he entered college and ended up joining a club.

To his surprise, the girl he saw naked that day happened to be in the same club as him. Now can he stop visualizing her naked every time he sees her?

Hetakoi is definitely not the usual generic shounen romance. It has so many sexual-humored jokes and scenes, but it is only one of the many good aspects.

This adult romance manga is especially for the youth who strive to find a girl they like, and it also tells the meaning of the smallest things in our lives. Just read it, and you won’t regret it.

Minamoto-kun is pretty, and almost everyone thinks he is a girl at first glance. Due to this, he was constantly bullied and even had to move out of the house after his father remarried.

Now he is living with his gorgeous aunt, who is a professor, and she told him to be a “guinea pig” for her Hikari Genji project. Could this turn of events make his life better?

Minamoto-kun Monogatari is definitely among the best adult manga stories I’ve read. It sucks you right in like a black hole, and even with plot holes, you wouldn’t mind it.

Daisuke is very popular with the girls at school, and that includes his childhood friend Yuzu and a flirty Kazuki. But only one girl named Hinako is afraid of him instead, which has something to do with her little secret.

Somehow, Daisuke discovers it and decides to protect her whatever happens. Suddenly, it seemed like the girl he had no interest in had become the most important thing in his life.

Bitter Virgin is kind of an unexpected romantic story. It definitely won’t leave you with a happy feeling after reading it and gets the best out of your emotions.

It has everything, including sex, a good concept, cruel truth about life, unwavering romance, and a pinch of heartwarming comedy. Try this one out if you’re looking for a meaningful adult romance manga.

Kido Tatsuhiko had to move to Tokyo to start a new life in the art school. In his apartment room, there is a small hole that connects to the other room.

He gets a chance to see a girl from this peephole. Could this be a beginning of a new and exciting life for Tatsuhiko?

Peep Hole was undeniably one of the best reading experiences for me. Whether it be ecchi scenes or the plot, the manga is straight-up awesome.

The art was pretty eye-catching, and the characters were quite interesting as well. Probably you would read it a couple of times, and if you’re looking for an adult manga, this could become one of your favorites.

Punpun is an average and quiet elementary school student who does his everyday routine, but he never had an easy life due to everyone around him.

Still, he does his best to live quietly by contemplating his dreams, anxieties, sexual relationships, and experiencing every kind of joy.

I really don’t have any words to write about this manga. But one thing is for sure; this manga is not less than a Masterpiece! It is not your usual romance adult manga with hot scenes but rather the opposite.

It has a very dark atmosphere and tells a lot of Punpun’s life. You can read this adult seinen manga if you want something different.

There you go- the ultimate list of the best adult manga you’ll ever see. The word ‘adult’ defines multiple meanings, so I can’t be sure what intention you have come to our article.

But regardless of that, you’ll find various kinds of titles, so you’re bound to find a manga to suit your taste. So, we hope you’ll have a great time reading these!

The Beginning After the End Next Chapter Release Date!! Delayed or Not?

Weathering With You Will Be Released in U.K and Irish Cinemas Next Week