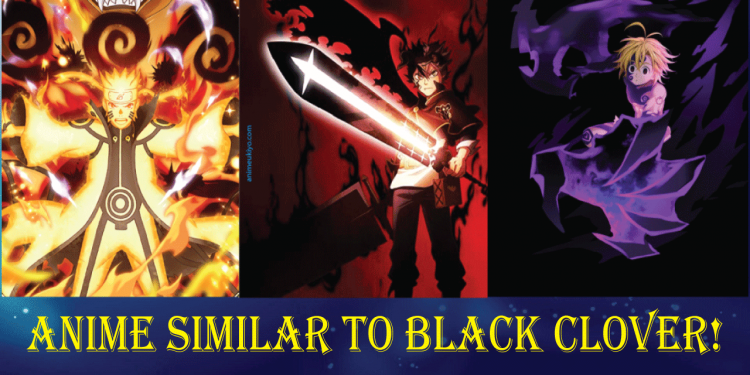 Black Clover is this decade’s best shounen anime if we exclude long-running anime shows like One Piece. With the perfect blend of humor, action, and character development, it has made quite an impact on the audience.

If you’re here looking for some amazing anime like Black Clover/anime similar to Black Clover, then you must’ve liked how Black Clover shows the variations in magic abilities.

So, like how Asta became chosen by Five-Leaf Grimoire, and how he proved weak can become strong, the ones we’ll suggest you are a lot similar. Well, let’s dive right into the list of anime like Black Clover/anime similar to Black Clover.

Little Witch Academia sets in Luna Nova Magical Academy, where young girls train to become witches. Akko Kagari, a girl inspired by a witch named Shiny Chariot, enrolls into the academy with the same goal as others.

Unfortunately, Akko Kagari is unable to control/use magic, and this makes her dream impossible. Is there no way or a miracle that could help her achieve? Watch how Akko struggles and yet moves forward with her goal.

Little Witch Academia is more like a replica of Black Clover, and it is definitely worth giving a try.

Princess Elizabeth embarks on a journey to find Seven Deadly Sins, who split up many years ago to save her kingdom from Holy Knights.

When she finds the captain of 7DS (Meliodas), they both conquer the kingdom of Liones along with the remaining brigade members. In the process, more mystery, adventure, and action will emanate, leading this series into one of the best anime like Black Clover.

So, Seven Deadly Sins is an amazing action-packed anime similar to Black Clover you need to watch at any cost.

“Blue Exorcist” or “Ao no Exorcist” follows Rin Okumura, who seems like an ordinary teenager but is actually the son of “Satan.” Satan sent him to this world to make him a suitable vessel since he can’t find one.

Instead of becoming Satan’s vessel, Rin decides to save people and himself by learning exorcism. But it might not be as simple as he would think because Satan isn’t his only enemy.

Thus, Blue Exorcist is a great anime like Black Clover worth watching at least once.

My Hero Academia follows Izuku Midoriya, who is born without a quirk in a world where superheroes are considered idols. His dream is to become the world’s greatest hero and become the symbol of peace like his idol ‘Almight.’

Although he isn’t capable of becoming one, due to an encounter, Almight gifts his transferrable quirk to Midoriya. Thus begins the journey of Deku (his hero name), who strives to become the world’s greatest hero by getting into the U.A academy.

Fairy Tail is by far the closest one on the list to Black Clover in terms of setting. The story follows Natsu and his adventures, who later meets Lucy, a girl searching for hidden celestial keys.

When she discovers Natsu is a part of the Fairy Tail guild, she decides to join him in his journeys. And so, the most beautiful and epic journey has begun. It is a lot similar and amazing anime like Black Clover in every aspect.

So make sure to watch this incredible anime like Black Clover that entertains you in every instant.

Magi: The Labyrinth of Magic

Magi sets in a world where there are said to be many dangerous Labyrinths known as “Dungeons,” possessing incredible treasures. Legend says it is the work of Magi, rare magicians who guide people to the Labyrinths and build their empires.

Enter Aladdin, a young magi with incredible talent, and is ready to explore the world. On the way, he befriends Alibaba, Sindbad, and many people, and they tag along with him to continue the adventures.

It is one of the best anime similar to Black Clover out there, and you should watch it if you love Black Clover.

Seraph of the End

The story sets in a world overrun by Vampires after a deadly virus kills most of humanity. However, people under the age of 13 are not affected and taken by vampires as livestock.

Yuu and Mikaela are two best friends who try to escape from their clutches with a few others, and unfortunately, everyone dies except Yuu. After escaping, he meets humans and trains to become strong so that he can exterminate all vampires.

It’s time to wind up the list of anime similar to Black Clover. If you have been a fan of the magic anime genre, then you’ll love these anime series. There might also be other anime series with similar concepts, but we figured these titles are rare.

The majority of the fandom are not familiar with anime shows like Magi, Little Witch Academia, and Seraph of the End. Considering how good they are, they are more than eligible to be on the list.

So, if you haven’t watched any of these, it is time you do. What do you think of Black Clover? Have you read its manga? Let us know your thoughts in the comment section below.

11 Insane Action Anime of all Time You Mustn’t Miss!