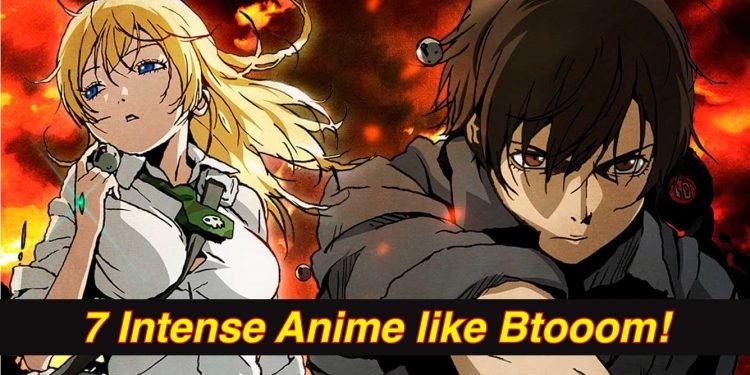 I guess you have seen Btooom! recently and came here looking for some similar anime recommendations. Well, I would do the same because Btooom! was awesome with the survival battle royale concept and all.

So, in this article, we’ll let you find some better anime like Btooom! and we think these are the closest ones as far the aspects go. Let’s get it started then.

Kei and his childhood friend Kato have died in a train accident, and instead of finding themselves in heaven, they are in a room filled with strangers.

As if dying once isn’t enough, they’re forced into doing dangerous missions as killing aliens with an arsenal of guns and high-powered suits while the survival rate being low.

Ganta Igarashi had to witness the slaughter of his entire class by a mysterious person named “Red Man.” But he was labeled as a mass murder since he is the only survivor of the class.

He’s thrown into a private prison known as Deadman Wonderland, which acts as an amusement park for many people. Can he survive in this place filled with brutal games and uncover the truth behind all this?

A magician, a gangster, a female doctor, a policeman, a businessman, and such a random group of people find themselves on a desolate island.

While they have no idea how they got in there, primitive tribes, deadly situations, and mutant viruses await them on the island. How can they survive?

Kaname Sudo is a high school student who one day receives an invitation from a mysterious app named “Darwin’s Game.” Without thinking much, he accepts the invitation and launches the app.

Right away, he gets drawn into a game of survival where people fight each other using superpowers known as Sigils. Can Kaname survive these furious battles?

The story is about a group of friends who wake up in a strange and completely different world. At first, they think it’s a dream, but soon they realize it isn’t.

But once they come to know that the only way to survive in this world is by participating in deadly survival games, they find themselves in between a rock and a hard place.

Yuki is a middle schooler without any dreams or goals in life, and the only thing/hobby he has is his diary.

One day he finds his cell phone filled with diary entries, and without knowing anything, he finds himself in a game with other diary owners to become the new Lord of Time.

Hope’s Peak Academy is known for gathering the best students and providing them with a high-class education. At least that’s what Naegi thought before enrolling into it by a lottery system.

Soon Naegi and other students find themselves playing a game where they have to kill fellow students to graduate. In this bizarre environment of a deadly game, how will he survive?

Btooom! anime has been a great adventure, especially with additional themes like survival, mystery, and action romance. If you’ve enjoyed it a lot, you’ll also love the above recommendations.

So, what do you think about our list of anime like Btooom? Do you have any other anime on your mind? Let us know what you think in the comment section below.