10 Best Anime to Watch at Home While Quarantined! 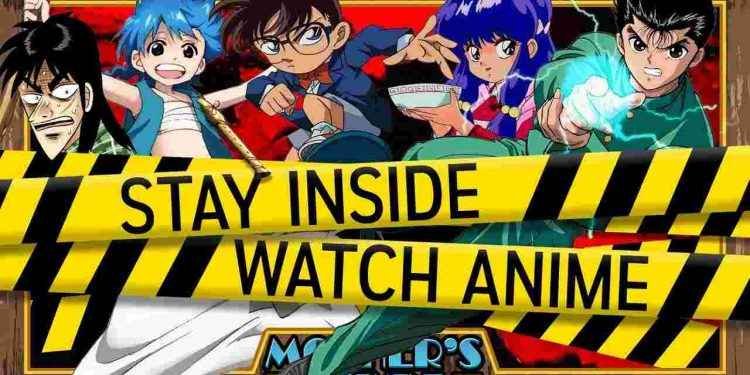 Due to the outbreak of the COVID-19 pandemic, you might’ve got stuck at home and wondering what to do. There are plenty of things you can do. Those include playing games, watching movies, or you can self isolate with a nice, long anime. We have compiled the list of the best anime to watch at home during quarantine or lockdown.

Our list comprises various anime series from action to romance genre. And by any chance, if you wind up on our website, consider yourself lucky. Because keeping the present situation in mind, we’ve made this list, and it includes the best picks you can ever find.

Might as well start with the obvious one, which is one of the best anime of all time and even voted as the #1 anime by the Japanese fans. Death Note is the most brilliant and clever anime to date, and there is no denying this fact. Have you ever thought of a series where you can find a twist in every episode? Glad you’re here, one such anime is Death Note.

The basic plot of the anime revolves around Light Yagami, a genius high school student who finds a mysterious book with supernatural powers. As the owner of the book Shinigami Ryuk enters our world, he guides him to use the book to ease.

The book possesses the ability to kill anyone whose name written on it. However, as soon as Light encounters L, a genius detective, the game begins. Who would’ve thought you’re about to experience a Masterpiece! It is a must-watch and one of the best anime to watch at home, especially at times like this.

Attack on Titan is an incredible anime to watch at home right now. It is perfect for every aspect of story, music, animation, and what else. Trust me when I say, you might have a panic attack while watching it.

Because every suspense you encounter is a shock and there is a 0.001% chance you’ll guess it. With the finale (season 4) is near, it is now one of the most anticipated anime of 2020.

The plot screens Eren Yeager who vows to eliminate every last Titan(man-eating giants) from the world after his hometown is destroyed and his mother is killed.

Can he avenge those Titans that have brought humanity to the brink of extinction with his will power? It is the best anime to watch at home when you want to get rid of your boredom.

No one can deny the fact that Demon Slayer is not only one of the best anime of 2019, but also one of the best anime of all time. And as the sequel Mugen Train is near to its release, you have to watch it soon to experience the extreme magnificence of the anime. In every aspect, it proves how far an anime can reach the audience. This show might become a cornerstone for the new generation of anime.

The story of Demon Slayer starts with a family who lives a peaceful life, and Tanjiro is the only and elder brother of her sisters. One fine day, he goes to the village to sell charcoal, and as he returns, his family gets devoured by a demon, and only his sister Nezuko seems to be alive.

Even though she turned into a demon, the bonded motions make her a human. Now, Tanjiro’s quest begins to turn her sister back to human, and in his journey, he encounters various demons, and the anime turns out to be an epic one. And so it holds its place on one of the best anime to watch at home.

Probably you don’t want to watch a series because it’s long. So don’t worry, we’re recommending the best anime movie you can watch right now. Your Name is like an orgasm for the mind and, of course, eyes. The animation of the series is an instant classic. This 2016 anime film has marked its place as one of the best anime movies of all time in anime history.

The story follows two youngsters Mitsuha and Taki, living separate lives until they suddenly switch places and experience each other lives. They build a connection by leaving a note for another until they wish to meet each other.

But who knows something stronger than the distance will keep them apart in the future? It’s hard to find a movie like this these days, and it is one of the best anime to watch at home.

Dr. Stone is one of the brilliant anime made in anime history. And it’s rare these days to find an anime that can offer you pleasure and culture. It puts two of the most favorite things of people-Science and Ramen.

You’ll be hyped from the very start due to the science it shows, and with every logic, your mind reacts like it has seen a wonder. If you’re looking for an anime that draws you in and is very different from the usual ones, then it is the best one to watch at home right now.

The story follows Senku, the protagonist of the series who wakes up in a stone age after a blind flash of light petrifies all humanity. And luckily, Senku is a science genius who can recreate the world from the present state.

As he finds ways to save all of humanity, he encounters many obstacles that will lead the show into a unique and brilliant one. It is definitely one of the best anime to watch at home during quarantine to kill some time.

Mob Psycho 100  is yet another masterwork of ONE. The style of animation is mesmerizing to your eyes, and the action sequences are no exception. It is one of those anime shows where you can experience visuals and music equally. And the main character is hilarious and lovable. If you’re looking to laugh continuously and not able to take your eyes off the screen, then this one is for you.

The story centers around a psychic middle school boy who tries to live a healthy life and keep growing his powers under control, even though he gets in trouble consistently. Who knows where his power will lead him? It is well deserved to be in our list of best anime to watch at home during the lockdown.

Fruits Basket is a pleasant and heartwarming anime. Being a reboot of the original anime which aired in 2001, it is true to the manga. With the beautiful animation and character design, it gives you a nostalgic feel when you finish it. If you’re feeling like you’re having the worst days of your lives, this anime is like a cure for it.

The plot is simple and sweet. After a family tragedy turns the life of Tohru Honda upside down, she lives on her own, and at last, due to some incidents, she lives alongside her classmate Yuki Soma.

Since then, the lives of the people around her get meaningful. This show can’t merely be explained by a few words when you watch it; you’ll know the depth of it. Don’t miss it. After all, it is one of the best anime to watch at home.

The Promised Neverland is an absolute thriller. It reminds me of the intellectual struggle between Light and L from Death Note. With the suspense-filled story and brilliant main characters, this show has proven it’s worth. Since the first season ended with a cliffhanger, fans over the world are now excited for the second season.

The basic plot of the anime follows a group of smart kids who live in an Orphanage. As they discover the dark truths behind the Orphanage, they begin to plan an escape to save all the children from the threat.

The thrill you experience while watching it is immeasurable. So make sure you watch it, and you don’t want to miss one of the best anime to watch at home.

Vinland Saga is a Seinen Masterpiece! A very impressive step by the Wit studio in showing the best character development and visuals. The best part about Vinland Saga is that, when you watch it, you just can’t watch it like any ordinary anime. It immerses you completely in its story and lets you experience how deep a show can be.

The story revolves around a young man named Thorfinn, who seeks revenge against his father’s killer Askeladd. But as the son of a warrior, he wishes to kill him in a fair battle.

Who would’ve thought a young man who strives for vengeance plays a pivotal role to built a nation! The list of best anime to watch at home is honored to have Vinland Saga in it.

In my opinion, this is the best sports anime you can ever watch. The show keeps getting better with every season, and the character development is simply amazing. And some episodes might seem like finishing very soon, well it’s not that they’re short, but your level of immersion is damn good. It makes you laugh, inspired, and, more importantly, it never fails to excite you. If you’re a fan of sports, then you can’t miss such a fantastic anime.

The story of Haikyuu follows the dream of a boy named Hinata Shouyou who gains a sudden love for Volleyball after watching a national championship match on T. V.

As he decides to become like the championship’s star player, he joins his school Volleyball club. And so his journey to become a star Volleyball player begins. It is, without a doubt, one of the best anime to watch at home right now. So make sure you watch it soon.

As we know, streaming services like Funimation and Crunchyroll are not available in India. We thought you might like it if we provide you the links to the other official streaming sites! Since we couldn’t find the Dub episodes in any official streaming websites, you can visit Gogoanime, 9anime, Kissanime, and Animeheaven to watch them. We hope you’ll love these anime shows and have a great time with them while you’re in quarantine!

Demon Slayer: The Top Selling Manga of 2020 in Japan by Volume!