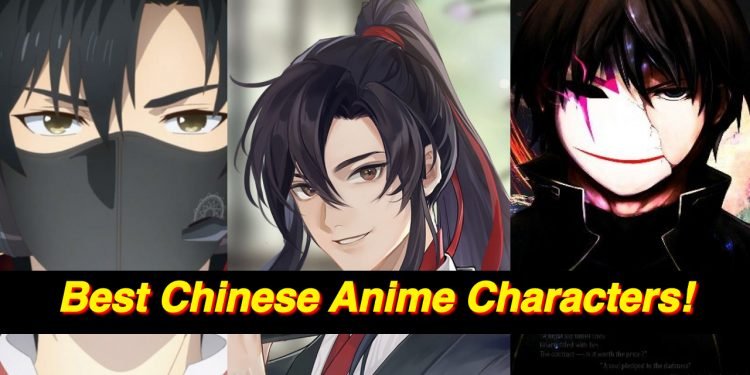 Chinese anime series might not be as popular as Japanese ones, but there are some quite good ones even among them. Well, we even have some lovable Chinese anime characters in Japanese anime.

In this article, we’ll elaborate you a great list of the best Chinese anime characters you can come across. That is according to our knowledge, but we assure you that you’ll love the list.

The only pair in which I can choose neither one. I have read the novel, watched the anime, and even watched the beautiful live-action drama. But I can still not love them any less than the other one.

One sacrifices everything for the sake of rightfulness, and the other makes sure no one harms his darling. So, now tell me, how can we choose one from this wondrous duo?

Legit, Ye Xiu is one of my favorite characters in both anime and live-action drama. I mean, he’s completely awesome when it comes to gaming and morals.

Although he was quite different in the anime compared to the live-action drama, I still cannot like him any lesser. Well, probably my love for gaming made it possible.

How can someone watch the anime/read the novel and not love Hua Cheng? I say, Hua Cheng, don’t ever leave Xie Lian because you both are just so adorable, and I can’t get enough no matter how many episodes I see you in.

Normally the main characters in Chinese historical dramas/anime stay down to earth, but Hua Cheng is something else. His adorableness, responsibleness, and the way he cares for Xie Lian is special.

Ling Yao is literally the purest character in this entire anime. He might have the “Greed” in him, but they both grow a lot as characters by the end of the anime.

He is funny, and when he fought with Bradley while carrying another person, he was just too awesome. Overall, he is such a strong character and definitely the one you can’t hate.

A badass lady who can make anyone simp for her. Yes, I’m talking about Revy from Black Lagoon anime. There’s so much about her messed up and deeply flawed, but we can’t help but admire this awesome antihero character.

In other words, she is the embodiment of savage and hot as hell. So, I guess she counts as a Chinese anime character who we can never afford to hate.

Hei is called Chinese Electric Batman for no reason. He’s badass, emotionless, and not overpowered, which also makes him an exciting character.

He has no personality, but that’s just his character, and he pulls it off quite nicely. So, if you don’t think Hei as your bae, then you might have to watch the anime again.

I don’t know about people, but Susu is literally the cutest character I’ve come across in a Chinese anime. She’s clumsy, innocent, and a deadly chef.

Well, I don’t have many words to say about her except she always charms the audience with her cuteness and funny personality.

While most people love Kagura in Gintama anime, I prefer this badass antagonist who’s beyond perfection. Naturally, antagonists get a little bit of hate, but you can’t possibly hate this one.

His childhood wasn’t that great because he only thought of getting stronger and even did unmeaningful things. Regardless, I can’t seem to hate this guy at all.

There might be even more amazing characters in Chinese anime shows, but these are my personal top 8 favorite ones.

So, who is your favorite Chinese anime character? And do you think any other character deserves a spot on the list? Let us know what you think in the comment section below.

One Piece Live-Action Series is Confirmed by Netflix via First Look!

The Beginning After the End Next Chapter Release Date!! Delayed or Not?

11 Best Slice of Life Anime to Spice Up Your Life!