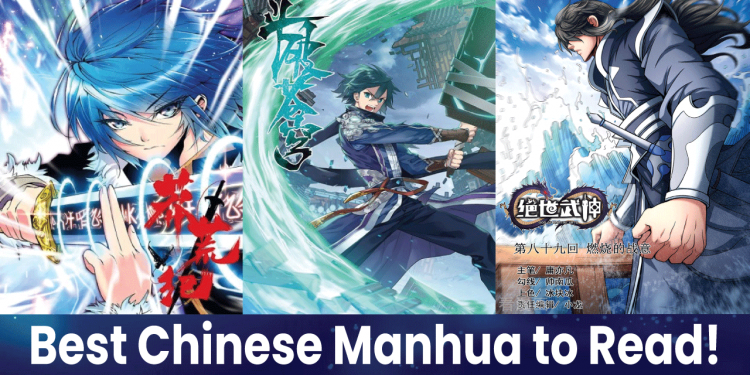 You might’ve read countless Japanese manga or Korean manhwa but have you ever tried reading Chinese manhua? If you didn’t, you’re missing a lot (which you shouldn’t!)

These manhua include incredible art and storyline along with unique world-building. So, you might as well start reading some of the best manhua out there.

If you can’t find any, don’t worry, we’ve got your back, and here we come with the list of best manhua you can read to make your time worthwhile. So, let’s begin the list of the best Chinese Manhua/Best Manhua!

1. Song of the Long March

“Song of the Long March” follows the story of Cheng Ge who desires revenge on her own uncle, the current ruler of the Tang Dynasty. But to do that, she needs to ask the aid of the enemy who is at war with the Tang Dynasty for decades.

Although she loves her kingdom a lot, the path she takes would need a lot to sacrifice. Read how Cheng Ge sacrifices everything just for measly revenge. But why is she going to war with her own uncle in the first place?

Starting our list with “Song of the Long March” actually might be a good thing. Naturally, the reader needs a manhua that can hook him up right from the beginning. In that sense “Chang Ge Xing” is not an exception since it executes the story perfectly.

If you’re into Chinese manhua that involves scheming, fighting, and more importantly a cause, then this one is a perfect choice for you. So, make sure to add this one to your list since it is one of the best Chinese manhua out there.

The King’s Avatar is one phenomenal manhua following the story of Ye Qiu, a gamer who is forced to retire from Jiashi after taking it to the pinnacle stage in the game “Glory.“

After retiring, Ye Qiu leaves everything behind only to work in an internet cafe. When Glory launches it’s 10th server, he makes a comeback to prove what a true gamer is made of.

As interesting as the premise sounds, it sparks an interest in gaming for every reader (just as it did with me.) The execution of the plot is perfect, and you’ll go “Woah” at most of the times.

So, if you haven’t read this amazing piece of work, it is time you do. After all, it is one of the best Chinese manhua to ever exist.

3. Journey to the West

“Journey to the West” follows the story of the heavens, where Sutra (sacred texts) have gone missing for many years. As a final attempt, Heaven sent its army to find it no matter what.

However, it seems like not only heavens but also other few armies are searching for these texts. Can they find them before they fall into the wrong hands?

This manhua’s premise is a unique one compared to the rest on the list. The flow of the story is very well done, and as you go through the chapters, you discover more things that build more anticipation in you.

So, if you’re into a story-driven manhua instead of character-driven, then this one is for you. Thus, we brought this one to the list of best Chinese manhua/best manhua of all time.

The Great Shang dynasty has been the ruler of the human realm for years now, and unfortunately, the Gods didn’t like how the new emperor rules. As gods’ will doesn’t seem to benefit the humans in any way, he defies them.

He knows that it can reflect greatly on his people, but he decides to face them head-on. Now, the fate of all humanity lies in the hands of the emperor as he battles against gods.

Feng Shen Ji has three parts, and I’d say every part is worth looking into. The story is excellently written, and the art is just “Wow!” While it might feel unique from the rest, we assure you that you’ll love its historical setting.

The characters, including the protagonist, took this manhua into a whole new level. So, if you’re looking for the best manhua to read with some insane action scenes, this one is for you.

5. The Ravages of Time

It’s been 2000 years since the Han dynasty of China that has been ruling over the decades had fallen. Three Kingdoms- Wei, Shu, and Wu emerged as heroes let out their last breaths.

It re-tells the story of how these three kingdoms forged their bonds in the midst of a war between loyalty and betrayal. Read how this legendary tale took place in the Three Kingdoms period.

Three Kingdoms has been popular in Chinese culture, but this manhua takes the storytelling into a whole new level. Firstly, the character designs are so real, making them more human, rather than representing them as in history.

If you like historical manhua with mind-bending interactions of characters and some incredible action scenes, then we assure you can’t find anything better than this. After all, it is one of the best Chinese manhua out there.

6. The Legend of the Sun Knight

“The Legend of the Sun Knight” sets in a world, where the God of Light, is worshipped by a Church. Twelve Holy Knights are the ones who serve this god, and the captain of the Holy Knights is the main protagonist who is a man close to perfection.

However, even in his perfect character, there lies a different character which seems utterly opposite from the world ‘Perfection.’ See how this legendary sun knight entertains you with his life adventures.

The best thing about this Chinese manhua is that every holy knight has a unique personality and keeps you entertained the whole time with their humour. While it has some hilarious scenes, it also provides some kind of clash, resulting in action.

So, if you’re interested in reading a manhua with a comedic concept, you might as well add this one to your list. After all, it is one of the best Chinese manhua to read.

The story sets in a martial world where the ‘Wudong‘ martial art faction eradicates every other faction who chose to oppose them. Their goal is to become the strongest martial faction in the world.

Yan Heng, a young swordsman of Qing-cheng faction witnesses the deaths of his clan and gets saved by a hunter named Jing Lie. Later on, they both embark on a journey to become strong and take the path of revenge.

In our whole list, the most anticipating Chinese manhua would be “Blood and Steel.” The blend of history and martial arts isn’t new in these manhuas, but execution definitely differs.

The action scenes are very well done, and in addition to these, other aspects are worth looking for. So, it is one of the best Chinese manhua of all time that you need to read.

Eden Game sets in a virtual reality game developed by “God’s Domain Technologies” which became popular in the nick of time. This game is called flawless and eventually became everybody’s dream world.

People who hate reality often come here to make their life easier and not just that, but they challenge one another to enter Eden’s paradise. Read how our protagonist explores this world as he discovers it.

This manhua reflects more on those who love gaming and those who also hate reality in their life. With an amazing blend of sci-fi and action concepts, it takes you on an incredible adventure.

So, we thought it would be better to add this amazing Chinese manhua to the list so that you can find the best manhua that can give you a little change of pace in your genre.

Zhang Chulan gets attacked by the zombies when he’s on his way to his grandfather’s grave, and a mysterious girl holding kitchen knives saves him. As he escapes safely from the scene, thanks to the girl, yet another twist comes in the story.

Chulan sees the girl in the university and eventually, ends up discovering the people who have some special powers. As battles take place one by one, an answer to every question comes to light.

The Outcast has such a good premise, and even though it isn’t executed perfectly, it still does everything it can to keep the reader satisfied and entertained till the end.

If you’re into psychological thrillers with a mystery plot, then this manhua is for you. Well, at the very least, it keeps you going on and doesn’t let you down even in an instant.

In the year 2100, humans took the virtual reality game into the realism level of 99%. Feng Lan is a girl, but due to a bet with her twin brother, she becomes the only female to choose the male character.

As she becomes a bloodthirsty warrior in the game, her fame rises. Now, she has to keep her identity a secret from the people she knows and the people she is beaten up.

1/2 Prince is one interesting premise with exceptionally developed characters. The concept of the manhua might not be the best one, but it is definitely the best on the list.

The humor in this manga can be one noticeable aspect as it stands out from the rest of the aspects and in the end, you’ll have a blast with this manga for sure.

While most people prefer to read either manga or manhwa, we think manhua are utterly underappreciated. These Chinese manhua comprise of decent plots, insane action sequences, and wonderful world-building.

If you’re a beginner at reading these mangas, then start with a good one so that you’ll love the world of manhua to the fullest. Since you’re hesitant to choose one, we recommend you start with “Song of the Long March.”

So, what would be your pick from the above list? Did you find any title or premise interesting? If so, let us know your thoughts in the comment section below.

10 Best Webtoon Apps to Read Manhwa Wherever You Want!

Demon Slayer Manga Comes to an End with the Next Chapter on May 11!