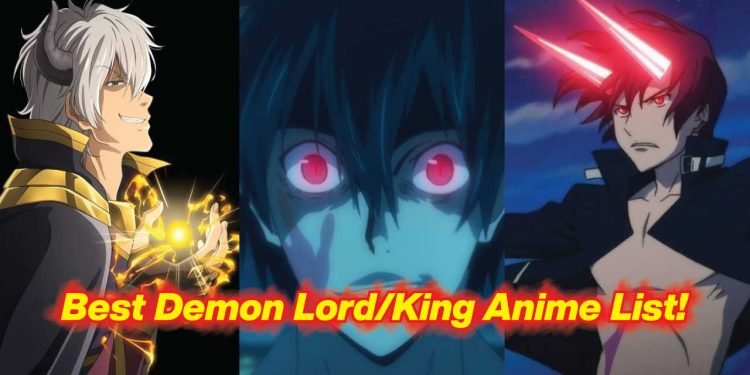 Demon Lords/Kings are cool, aren’t they? Well yeah, I’m talking about the ones who are in the anime. Although people think they are evil, the anime shows us a different side of them.

There is no end to fantastic action scenes and some cool magical abilities in these kinds of anime. So, I am guessing you’re looking for really amazing demon lord anime shows. Let’s jump into the list then!

Lucifer is an Archangel in heaven, and one day, she gets banished to hell because of her revolution against the lord. There she finds a demon lord named Leviathan who tries to defeat Seven Sins.

But even combined with Lucifer’s powers, it won’t be possible since they hold Garb of Punishment over her body. Now she makes her way into the earth to find one who can help her free of the curse.

You might not get a standard plot in this anime, but if you’re in for some hot anime girls with supernatural powers, then you’ll be witnessing heaven for the straight 12 episodes.

I know what you’re thinking. This anime got one hell of a low rating; why should I watch it? It is definitely not as bad as it seems from the reviews. You might even miss out on this hidden gem.

Akuto dreams of changing the world for good and enrolls into Constant Magic Academy and befriends a girl named Junko. However, his hopes get destroyed when he is prophesized to become a Demon King.

With the news spreading across the academy, everybody fears him, and the distance between him and Junko decreases. Will he fight against his fate and prove that they are wrong?

Except for some unwanted ecchi scenes, this anime is a blast. It has such a badass protagonist, and the characters are exceptionally good.

One thing you can be assured of is that ecchi scenes were made funny instead of disturbing. Overall, a very good demon lord anime with lots of entertaining moments.

9. Sleepy Princess in the Demon Castle

The Demon Lord Tasogare kidnaps a Princess named Syalis and imprisons her in his castle as a hostage. But it was the biggest mistake of his life, and he’s going to regret it very soon.

This adorable Princess is actually an awaiting horror who does anything for the purpose of a single night’s sleep. On the other hand, a dumbass hero Dawner is sent to rescue her.

If you have been watching constant action anime and need a change of pace, this anime is perfect for you. The comedy, story, and characters are quite wholesome.

It is basically a cute girl doing cute things kind of anime, and actually, the story revolves around a demon lord. So, why not? Try watching it if you want to watch a relaxing anime.

Shibuya Yuuri tries to save a friend from the bullies and ends up in a toilet after getting beaten up, and just like that, he gets sucked in, transporting into an unfamiliar world.

This new world is filled with fantastical things like magic, skeleton, and a lot more. Soon, he hears from a group named Mazoku that he is the next Demon King. But how can he lead a war when he is clueless about everything that is going on?

This one is a very simple and interesting anime that I couldn’t stop watching. There was never a dull moment, and even if the story is simple, there are enough twists and turns.

The main character’s development was great, and all the characters have been so exciting. If you’re looking for a demon lord anime with a light-hearted storyline, try it out.

The kingdom of Liones gets chaotic with the Holy Knights getting corrupt, and Princess Elizabeth sets out on a journey to find The Seven Deadly Sins, who are the only hope to save her kingdom.

Surprisingly, she finds the captain of 7DS and finds out that the rest of the members are scattered. Along with Meliodas (the captain), she embarks on a quest to gather them and tale back the kingdom.

You must’ve been wondering why this anime belongs to this genre. Well, I don’t want to spoil you real good, but the MC is a demon king with insane powers.

If you want an amazing fantasy story with tons of epic action sequences, you should definitely not miss one. I’m pretty sure you’ll love it.

Akira Oono is a developer who manages an MMORPG, and after a few years, he decides to shut the servers once and for all. But somehow, he ends up in the game world in the character of a demon lord.

But there, he finds the things that he hasn’t created, like a girl named Aku. He sets out on a journey to find out the truth behind his summoning while exploring this fantastical world.

If you think it is just another harem demon lord anime, you’re wrong. You might not be satisfied with how the plot gets advanced and the animation is not so impressive. It’s about as generic as it gets.

But there’s a reason why you can still keep watching it. It’s like a McDonald’s Cheeseburger, you know it’s not good for health, but it is so delicious you don’t care about any of that.

Both Sub and Dub versions are available in the link below!

5. How Not to Summon a Demon Lord

A pro gamer with the strongest character (Demon Lord Diablo) gets summoned into a magical world by two girls. Since he is too powerful, they both couldn’t resist the power and ends up becoming his slaves.

Now to help them get rid of the curse, he travels with them across the kingdoms. But his only problem is that he is too awkward. What kind of adventures are waiting for this trio?

Honestly, this anime felt extremely entertaining to me. There was a little bit of fan service, but the whole presentation of the story was pretty good.

It is definitely one of the best demon lord anime with the isekai concept, and it has lots of action scenes to make you feel stunned. So, it is a must-watch.

4. The Misfit of Demon King Academy

The tyrannical Demon King Anos Voldigoad sacrificed himself for the sake of peace. After 2000 years, he reincarnated with his memories intact and discovered that everything he has done has gone to waste.

He enrolls into the Demon King Academy to dig out the mysteries about what happened after his death in his previous life. But can he set everything back while making sure to protect his loved ones?

Even if you have watched lots of demon lord anime, it feels so different from each one of them. It is filled with cliffhangers left and right, and the MC is overpowered as hell.

I would say the story is pretty much exciting all the time, and it never drags out. If you’re in for some epic action scenes, it takes you on an unforgettable journey.

Iruma Suzuki gets sold by his irresponsible parents to a demon named Sullivan. While he is afraid of what will happen with his life from now on, Sullivan just wants a grandson who can attend his demon school.

Even though he keeps a low profile at first, soon he discovers that everyone hopes that he will become the next Demon King. What kind of adventures are waiting in his life?

Honestly, the plot isn’t much deep, but it is a show you can watch with anyone because it is filled with infinite fun. All the characters are adorable, and the reactions are hilarious.

You might not get the same op demon lord mc vibes, but the story is still progressing, and you might be able to see one hell of an anime in the future.

2. The Devil is a Part Timer

Demon King Satan and his Demon General lost the battle against Hero Emilia and had to flee to another world. But they are taken back when they find themselves in Japan with magic gone.

To survive, now he must work as a part-timer while scheming to rule this world. But with Hero Emilia tailing them and being powerless, can they achieve it?

This anime is way too hilarious for you to take it seriously, but it will be one hell of a watch. If you have been watching a multitude of anime with weekly episodes, it will be a breath of fresh air to you.

Both Sub and Dub versions are available in the link below!

Xie Lan used to be a beloved martial god and known as Crown Prince Xianle eight hundred years ago. Now he ascends to the heavenly realm again with no one to help until he meets Hua Cheng.

Hua Cheng is a demon king feared by both demons and gods. But why would he help a Heavenly Official in the first place? And then, he also meets a young man who possesses great knowledge about the demon king.

This anime is literally a whole package of cuteness, amazing animation, an exciting plot, and really interesting characters. It’s not your typical demon lord anime but definitely one you cannot skip.

It perfectly follows the original story, and as a result, you got such a wonderfully executed anime. If you haven’t watched it yet, make sure to do it sooner or later.

There are barely any demon lord anime with a typical isekai setting, and even if there are, it is hard to find good ones. So, even if all the anime don’t meet the exact criteria, we included similar ones that can provide you with the best experience.

So, what do you think about our list? Do you have any other demon lord anime on your mind? Let us know what you think in the comment section below.

7 Best Anime Streaming Services You Must Have Subscriptions To!

The Best “My Hero Academia Watch Order” to Follow!

One Piece Released a Short Live-Action Series “We Are One!”