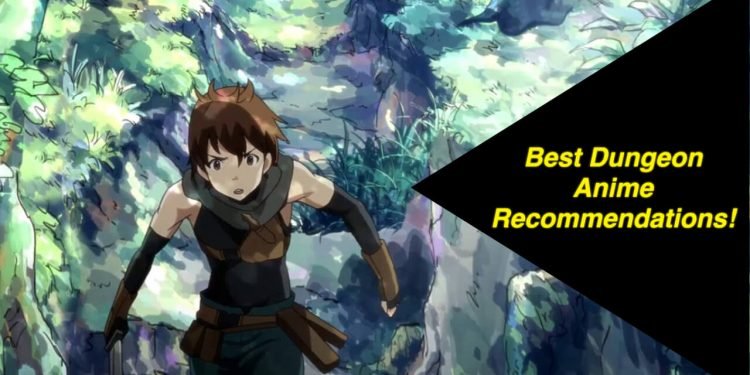 Almost every isekai/fantasy anime involves a common point: Adventures and Guilds. A group of people party together to explore various dungeons and collect exciting rewards after slaying monsters.

So, what are some of the best dungeon anime shows? We wonder the same—so in this list, we have compiled a list of top dungeon anime you must watch.

Contents Hide
Best Dungeon Anime List!
12. Shachibato! President, It’s Time for Battle!
11. The Hidden Dungeon Only I Can Enter
10. The Dungeon of Black Company
9. Rune Soldier
8. Tower of Druaga
7. Arifureta: From Commonplace to World’s Strongest
6. Sword Art Online
5. So I’m a Spider, So What?
4. Goblin Slayer
3. Is it Wrong to Try to Pick Up Girls in a Dungeon?
2. Overlord
1. Magi
Final Thoughts!

Gatepia is a well-developed city close to the Gate where citizens can obtain Kirakuri, an energy which changes the fate of humanity. To obtain them, thousands of organizations compete fiercely, and Minato seeks to hire the best adventurers to make his Kibo Company best.

It’s pretty rare to find a fantasy dungeon anime with this concept. We naturally come across adventurers clearing out the dungeons and reaping the rewards and such. However, unlike guilds, we have corporations in here and the whole concept is a breath of fresh air.

11. The Hidden Dungeon Only I Can Enter

The third son of a noble family, Nor is no less than garbage in the face of his family members. After losing a job, he stumbles upon a dungeon where he acquires a skill which is literally a cheat. But there is a catch: every time he uses the skill, his life points seem to decrease, and the only way to gain them back is by giving himself into worldly pleasures with the opposite sex.

Basically, Danmachi + Monster Musume gives us this anime. Regardless of how people see it, it is a joyful anime with a well-thought-out fantasy setting and plenty of humor. So, if you’re looking for a fantasy dungeon anime, this one is for you.

10. The Dungeon of Black Company

Kinji finally achieved his goal and was about to live his dream life until a portal out of nowhere summoned him to another world. If he wanted to live here, the only way is to work in mines. Kinji decides to become rich, and there is only one way: The Black Company.

We’ve seen tons of isekai anime with adventure & dungeons, but this is a rare pick. Blending business theme in isekai genre with dungeons as main theme, this anime excelled in immersing us. With many comedic twists and turns, the story managed to stay true until the end.

Louie is a mage, but his skills are rather poor, and he is interested in adventuring. When he meets a trio of adventurers who seek a mage, he offers to join the party. However, they reject him and later on, after a sheer encounter, they accept him. What kind of adventures are waiting for him?

Rune Soldier is quite an entertaining anime with an engrossing storyline and fairly memorable characters. It silver coats the humor with every adventure scene and lets you experience an astonishing ride. In other words, Rune Soldier is a great dungeon anime worth watching.

The tower of Druaga has been terrorizing the kingdom of Urak with diseases and monsters. The monsters devour anyone who attempts to climb the tower but in the Summer of Anu, a period which only occurs once every five years, they get weakened. The time has come, and a top guardian named Jil decide to climb the tower to kill the demon Druaga to end this disaster once and for all.

In a sense, Tower of Druaga is a fine dungeon anime with monsters and endless adventures. Although the story seems a bit confusing through the halfway, it gets better in no time. With plenty of action and comedy, you can kiss goodbye to boredom while watching it.

7. Arifureta: From Commonplace to World’s Strongest

Hajime Nagumo along with his classmates gets summoned into a fantastical world. While all of them receives powerful stats and abilities, he’s left with crappy ones. After stumbling on a monster-lurking dungeon, he has no option but to adapt to this dangerous world.

While it didn’t reach the hopes of manga and light novel readers, Arifureta is a great dungeon anime with a hard-working hero who doesn’t get plot armor or overpowered abilities right from the beginning. It is fast-paced, and you can see the progress in the story with some spectacular action sequences.

When a highly popular MMORPG game with nerve gear attracts thousands of players, there appears to be a problem. The players stuck in the game without getting logged out and if they die in the game, they also die in real life. How will these players make it out alive?

Sword Art Online is one of the few anime shows which completely immerses you from the beginning. It is a given many people are not satisfied with the plot deviation that occurs in between every season. However, if you’re looking for the best dungeon anime with RPG concept, we’re afraid you can’t find a better one.

The protagonist gets reincarnated into a fantasy world as a spider. To top off the danger, she awakens in a dungeon filled with monsters. With human knowledge and skills she acquires after killing a few monsters of her caliber, this spider attempts to survive in this dungeon.

It’s pretty rare to come across shows like these because it’s cute, weird and hella funny. You won’t even care much about the characters, as Kumiko (the MC) and Administrator D keeps you occupied. It’s worth it even if you’re not much familiar with isekai anime series.

There is a rumor about a man how he reached the silver rank just by slaying goblins. When a priestess of the guild forms her first party, she gets saved the very man who loathe goblins, and he’s none other than Goblin Slayer.

As we know, Goblins are cunning monsters who hide in dungeons, waiting for the chance to make surprise attacks. In this anime, you’ll face with similar circumstances, and it is one epic ride with constant action and solid storyline.

3. Is it Wrong to Try to Pick Up Girls in a Dungeon?

In a never boring city of Orario, Bell Cranel desires to become the greatest adventurer. After an encounter with a lonely goddess, his fantasy quest takes a step forward. But the dungeons contain terrifying threats in it.

The title alone gives you a hint it is a dungeon anime, but the question is: How good is it? Although 6 out of 10 people find this anime not so entertaining, we think it is pretty great. You’ll become intrigued by the character development and the interesting dungeon theme.

A veteran player named Momonga decides to stay in the game in its last moments as it is scheduled to be shut down. However, once the time comes, he couldn’t log out and gets stuck in his favorite MMORPG game for life. How exciting is that?

Overlord is your typical another world anime with RPG theme dumped in. It is similar to SAO but at the same time explores a bit of fantasy type world. There are monsters, dungeons, magic, and lots of stuff to pique your interest. If you’re looking for the best dungeon anime shows, Overlord is right up your alley.

In sand-swept lands, dungeon towers appeared 14 years ago and whoever clears one, they can obtain unimaginable treasures. Enter Alibaba, who dreams to clear all of these dungeons to become rich and to aid him, a cute magus named Aladdin crosses path with him.

Magi is a unique dungeon anime with magic and stunning visuals. While the Arabian Nights theme is enough to get your attention, it’s the least of impressive things you can expect from it. As the story progresses, the characters’ interaction get better and funnier.

Dungeon anime shows aren’t scarce, neither too many are available in various genres. Regardless of that, we managed to rake up twelve amazing titles with keen research.

Whether it be you’re an RPG fan or isekai fan, you’ll enjoy these dungeon anime series to the fullest. If you happen to know any other dungeon anime shows which deserve a spot on the list, feel free to mention them in the comment section below.

Doraemon Watch Order: What to Watch and What to Skip?