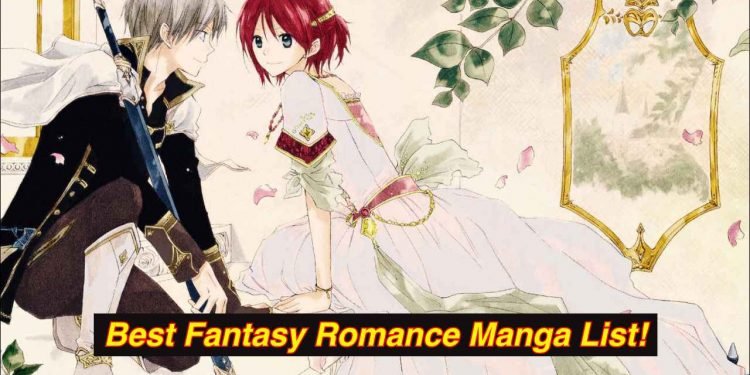 From spells to cloaks, from castles to creatures unknown, from wizards to kings, we all fantasize about being a part of this unattainable world. So, how do we appease our desires? We read.

Reading fantasy is without a doubt the best way to elude this world of harsh realities.

As a result, we’ve compiled a list of the top 10 fantasy mangas with a fistful of romance to get your nerves jangling and your heart fluttering with excitement. So, let’s begin the list of best fantasy romance manga.

Yuri is as normal as any of her peers, until one day her life takes a turbulent turn, and she’s left aghast. Yuri’s father—a priest, left her in the care of some distant relatives when he went overseas for some business. But little did Yuri imagine, that, all the Sakami brothers are real-life vampires, and for whom Yuri is just another significant prey.

This is the story of Yuri cohabitating with her blood-sucking brothers, who leaves no leaf unturned when it comes to quenching their thirst for blood, regardless of her wish. Now Yuri needs to not only survive but restrain herself from falling in love with these vampire hunks.

“Dawn of Arcana,” Rei Toma’s first manga to be published in both English and Japan, is a Shojo fantasy manga with 13 volumes. For tranquility between the two nations, the princess of Senan, “Nakaba,” and the prince of Belquat are coerced to marry.

Now, Nabaka and his trusted companion Loki have landed in Belquat territory, only to be treated as if they were hostages. Now, Nabaka must contend not only with the hostile attitudes of those around her, but additionally with an overbearing and possessive Caesar.

Dawn of Arcana narrates the beautiful story of Nabaka and Caesar’s relationship as it develops and becomes more genuine than a fake. In addition, Nabaka realizes the true nature of her powers.

8. Snow White with the Red Hair

A Japanese Shojo manga series consisting of 25 volumes, Snow White with red hair takes the readers to a dreamlike world of snow-white, but, with a convolution. Shirayuki, an amicable and adept herbalist from the Tanbarun kingdom, is incredibly beautiful and kind of stands out.

Her captivating red hair distinguishes her from the rest of the population. And it is because of this attribute that she magnetizes more attention than she intends. Shirayuki’s apple-red hair is noticed one day by the devious Prince Raj, who offers her to be his concubine.

Now she has only two options: become his doll or leave Tanbarun forever. Shirayuki, proud and confident, flew away to the neighboring kingdom of Clarines, reflecting the prince’s advances. With her life on the line, she flees, crossing paths with a young prince designated Zen.

Shirayuki is determined to transmute her fate by becoming the royal court’s herbalist, which will not be facile with scheming lords, exams, and her apple-red hair standing in her way.

The story is set in the Middle Ages, and each chapter brings Shirayuki and Zen closer together. Commencing as benefactor and patient, their journey leads them to the path of love.

She can either grab an extended hand or drown even deeper in the river of oblivion. Chise Hitori, a Japanese high school student who, as an orphan, is shunned by society, decides to end her lonesome days.

She is willing to sell herself in an auction with the hopeless hope of finding a place to call home and a person to call hers. Chise sold herself for five million pounds at an auction in London to an unorthodox and dreadful-looking humanoid with an animal skull for a head.

Regrettably, appearances can be deceiving. He shows Chise a place called home, sanctioning her to feel the warmth of being doted and desired.

Ancient Magus’ Bride transports us to a world of talking animals, fairies, and dragons. This is the story of an impeccable romance between a human, and an ancient magician that drives the reader insane while presenting the best narrative in its genre.

6. My Next Life as a Villainess

Imagine being reincarnated as an otome game character you played in your past life. Something truly bizarre happened to the protagonist of the manga series “My Next Life as a Villainess.”

Catarina Claes, a daughter of an aristocratic family, wakes up one not-so-fateful day to discover that her entire life in this world has been a lie, and she got reincarnated. Now comes the surprise. She gets the shock of her life when she realizes that Catarina has always been a villain and is doomed to be expatriated or killed.

The story depicts Catarina’s eventful and arduous life as she vows to clear away all her doom flags and live a tranquil life.

Catarina finds herself getting more and more proximate to the game’s male leads with each chapter. Thus, begins her road to love alongside her doom flag hosted high.

Kagome Higurashi, on her 15th birthday, is dragged into a well by a demon from her family’s Shinto shrine while probing for a lost cat. But, to her amazement, Kagome finds herself in an unusual setting, with outlandish outfits and unexpected demons.

Brought back to feudal Japan, she has something these dreadful creatures crave: A Shikon Jewel. While trying to save her life, she meets Inuyasha, a half-demon. With Kagome’s uncanny resemblance to the shrine’s now-dead maiden Kiyoko, Inuyasha is initially wary of her, but they must collaborate to find the Shikon jewel shards before they fall into the hands of malevolence.

A modern-day girl from Tokyo and a moiety demon, what an impeccable blend of fantasy and romance. Kagome and Inuyasha’s romance progresses with each chapter and surprises the readers by the terminus of this romance fantasy manga.

A manga set in a dystopian post-apocalyptic future narrates the story of humanity on the verge of extinction due to beasts kenned as Klaxosaurs.

To survive, humans seek refuge in technologically advanced cities within plantations, where they train, raise, and train children to pilot Franxx. These children are devoid of rudimentary individuality, and neither do they have any erudition of the outside world.

The plot revolves around an ace Franxx pilot designated Zero Two and an aspiring Franxx pilot denominated Hiro, who has lost motivation after failing an aptitude test during the graduation ceremony.

But after having met a strange girl named Zero Two, his life gives him another chance to prove his worth and fight alongside Zero two, piloting Franxx.

A fateful gaze is all it takes for our protagonists to fall so deeply in love with one another that they not only want to live together, but withal die in each other’s arms.

Akatsuki no Yona is a 38-volume story of vengeance and romance set in an ancient fictional kingdom of Kouka. Yona, the only princess of Kouka, has crimson red hair and is always loved and sheltered while being oblivious to the perils lurking outside her castle walls.

The story begins with laughter and bonds, but as the chapters unfold, Yona confronts a terrible fate. Her world turns upside down when she learns that her father has been murdered by her beloved cousin, Soo-won.

Yona is now coerced to flee her sheltered and lavish life in the castle, but she is not solitary. Accompanied by Hak, the general of the wind tribe, and her most trusted warrior, Yona is resolute to reclaim her throne from the vile hands of Soo-won.

Yona is no longer verdant, now she and Hak must find the four dragon warriors and atone for the kingdom she fled. The bickering couple struggles and stumbles along the path, but eventually finds where their heart belongs.

Tohru Honda’s life spiraled downward after the sudden and unexpected demise of her mother. She is fiercely independent and wishes to live without stirring up trouble with anybody.

When Tohru’s tent burns down, she has no cull but to move in with the kind and cryptic Sohma family, whose members Yuki and Kyo are her classmates. Tohru discovers the dark secrets surrounding the Sohma residence as the manga progresses.

Imprecated by the spirits of the 12 Chinese zodiacs, each member of the house transforms into a zodiac animal every time they are weak, disconcerted, or hugged by someone of the opposite sex.

This is a story about a fantastical romance with a dash of comedy, centered on Tohru and the Sohma boys. If you’re looking for romance fantasy manga with a very light-hearted and emotional touch, this one is for you.

Nanami, a lively but unfortunate girl, lives in a run-down house with her so-called father, who is up to no good but wagering. Nanami discovers, on a less than eventful day, that her father has fled, leaving her homeless.

But everything turns upside down when Nanami meets a mysterious man who offers her the role of shrine goddess in exchange for a decent home and aliment. But little is she aware that in the shrine there already is a fox familiar designated “Tomoe” who is reluctant to Nanami being the shrine goddess.

This mismatched and bickering pair expeditiously grows uncontrollably fond of each other’s presence, and thus commences a never-afore-said love story between a Yokai and a Mortal.

So, that was the cake of the “top Fantasy manga with romance as cherry”. Who needs to care about this mind-numbing world when you can isekai to a better one alongside dainty lolita or maybe a blood-sucking vampire?

So, if your heart belongs to this genre, then there is no way you can skip reading the above-recommended mangas.

Hopefully, we have quenched your thirst for fantasy romance mangas. Furthermore, if our list appeals to our readers, then you are free to express your opinions in the comment box below.

Shikimori's Not Just a Cutie Anime Review: 4 Reasons to Watch This Romantic Tale!