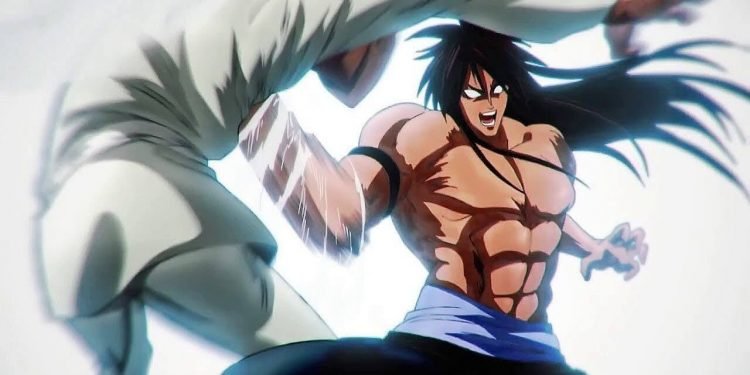 Martial Arts in anime can get pretty brutal and entertaining at the same time. From Baki to Kengan Ashura, we’ve seen countless amazing shows.

So, what are some of the best martial arts anime? If you’re looking for an anime with martial arts, you can find some spectacular recommendations here.

Honing his Bajiquan skills to maximum, Akira Yuki spent years for one goal: to see the constellation of the eight stars of heaven. Since only people with real strength are qualified to view them, he embarks on a mission to face various foes.

This is one traditional martial arts story and the anime relates quite well with classic shows. The premise explains everything, but what you need to experience yet are the stunning action scenes and the character development this anime has to offer.

Freeman became an assassin through force and began working for the Chinese mafia known as the 108 dragons. He’s highly skilled and cries whenever he hunts his prey, but who thought he’d fall in love with a girl and that would change everything?

Crying Freeman is a sad story about morals, but it has plenty of action and romance. Although it lacks plot twists and realism, you’ll enjoy the anime every bit because it has some special prepared in every episode.

13. Hitori no Shita: The Outcast

Chou Soran faces zombies while visiting his grandfather’s grave, and a mysterious girl saves him. However, soon he meets her at the university and others with special abilities. Seems like his life won’t be same anymore with mysteries slamming into his daily life.

Hitori no Shita: The Outcast is not entirely a zombie anime, and many people misunderstand it by putting their hopes up. Regardless of everyone thinks, it is an anime which only you can judge after watching, but it has everything you need from martial arts to mystery.

Watch it on Amazon Prime

12. Legend of the Condor Hero

Youka has been forced to learn Zenshinkyou Temple’s martial arts, but he found them boring and switched to ancient martial art style, Gyokujo Shinkei under the guidance of Shouryuujo, the beautiful female master.

He promised he’d put an end to the evil doings of her sister Ribakushuu and after years, the time has come. Now Youka is left with two tasks: find Shouryuuji and defeat Ribakushuu at any cost.

Legend of the Condor Hero is one of the most beautiful martial arts anime we’ve seen in years. Everything from the showcasing of martial art styles to romance are utterly delightful. While action is the solid aspect of all, you can’t underestimate its perfect pace.

The protagonist has been through a lot—his clan abandoned him, the world mocked him as a useless person, and someone killed him on the wedding day. However, thanks to Mirror of Samsara, he is reborn in this world to reach the pinnacle of power.

Against the Gods is a story about suffering, sacrifice, revenge, constant threats, yet it is so beautiful. This fantasy martial arts anime makes you addicted to Chinese novels, not only because of the action, but also with the quality of storyline.

Proclaiming himself as the strongest, Jin Mori fights in “The God of High School” tournament, where the winner gets a wish. Countless fighters join the tournament for various reasons, and who’ll win it?

The God of High School is a crazy anime if you didn’t read the manhwa beforehand. The animation is of high quality and the showdowns between the fighters couldn’t be more epic. If you’re looking for a supernatural martial arts anime, watch it.

Watch it on Amazon Prime

Although he doesn’t fit to be a Sumo, Hinomaru joins the sumo club in Oodachi High School. However, his appearance somehow changed the fate of the school and seems like it’s not a dream anymore to reach the highest rank anymore.

Hinomaru Sumo has everything you’d wish for in an anime. You get intensity through how characters undergo hardcore training and tactics while fighting by using various martial arts. If you’re looking for a martial arts anime with a unique concept, you shouldn’t miss this one.

8. Tales of Demons and Gods

Nie Li returned to his 13-year-old self after getting killed by the Sage Emperor with future memories intact. Now he had hit the reset, can he protect his loved ones from the upcoming disaster?

Chinese anime mostly consist of two common elements: Cultivation and Martial Arts. Tales of Demons and Gods is a great anime series to watch if you haven’t read its manhua or novel. The action scenes are pretty intriguing and although animation looks weird, it is stunning.

Son Goku meets Bulma on his journey to search Dragon Balls, which give the user a wish if all put together. However, they encounter various evil opponents on their way who seek Dragon Balls to bring destruction to the world.

Although Goku destroys his opponents with Super Saiyan forms & Kamehameha, he first trained in martial arts. From normal encounters to Budokai Tenkaichi, you can see tons of martial art encounters with various entities. Dragon Ball is a great watch if you love lengthy martial arts anime series with op MC.

6. Moribito: Guardian of the Spirit

The Emperor of Yogo decided to eliminate his innocent own son as a dark secret resides in him. However, a female warrior named Balsa, who swore to protect eight lives to make up for the people she has killed in the past, aids him. Will she be able to protect the prince?

Although on the surface, this anime seems as another historical action anime, you can’t deny the martial arts theme. It excels in animation by making it stunning, but also terrific action scenes. If you want a historical Japanese martial arts anime, try this one.

5. Fist of the North Star

In a world devastated by Nuclear War, Ken gets betrayed by his close friend only to end up being almost dead. However, he survived and not only proved that he’s not an easy man to get rid of – but also won’t stop until he gets his revenge.

What words can we utter about Fist of the North Star which haven’t already reached the wide audience across the world? The anime is so iconic that it is shaping the Shounen genre into a new one and with crazy action scenes with martial arts as the main theme, it excels in every aspect.

Baki Hanma has always been fighting and evolving through body and mind with one goal in mind: To surpass his father who is deemed as “Ogre” the strongest creature in the world.

However, the techniques his mother taught him are no longer enough, so he sets out to become stronger in his own way.

Baki is a metaphor of struggle and sacrifice, even if it seems as a show revolving around fighting. The characters make it what everyone claims, and they’re unforgettable.

But still, the best aspect goes to the action scenes during Tournaments. If you haven’t watched a solid martial arts anime in a while, start watching it.

Ippo Makunouchi was a loser and always a victim of bullying. However, when an up-and-coming boxer saved him from a beating, he decided to walk on the boxing path. With his new passion, his dedication gets tested, and he meets terrifying rivals in his path.

Hajime no Ippo thrills your nuts off by giving a blow after blow of twists and turns with its exquisite narrative. Although it falls more into a sports anime category, you can’t deny the fact that boxing is also a type of martial arts.

In short, you don’t get to see an anime of such caliber every day.

In the world of Kengan, every business deal gets settled through fighting. Tokita Ohma with the best martial arts, Niko Style, enters the tournament where monstrous fighters across the world gather. Will he be able to defeat them?

Although the premise focuses more on Ohma, rest of characters are as much important. This interesting tale of blood sport gives you an adrenaline rush during every fight.

Every fighter has their own martial arts and secret techniques. Mere words won’t be enough to describe how epic this anime is despite unusual CGI.

Known as “Weak Legs” Kenichi always been a victim of bullying until he stumbled upon Miu’s dojo. With life-threatening training, he becomes stronger day-by-day. However, a deadly gang named Ragnarok targets him. Can he survive the threats of the gang?

Well, your typical school boy power up where MC gets picked on. How regular the premise seems, it gives you an inspirational journey with constant knuckle cracking action sequences. Are you willing to suit up to enjoy one of the greatest martial arts anime?

Both sub and dub are available in the below link!

Well, there you go—The best martial arts anime list. If you haven’t seen many of these anime shows, you can probably enjoy these titles for quite a while.

We’re pretty sure we didn’t include a few titles that might deserve a spot on the list. In our place, would you care to give some recommendations to our visitors?

Darling in the Franxx Season 2 Release Date: Here's the Update!

A Civil Servant in Japan Gets Suspended for 6 Months for Writing Light Novels!