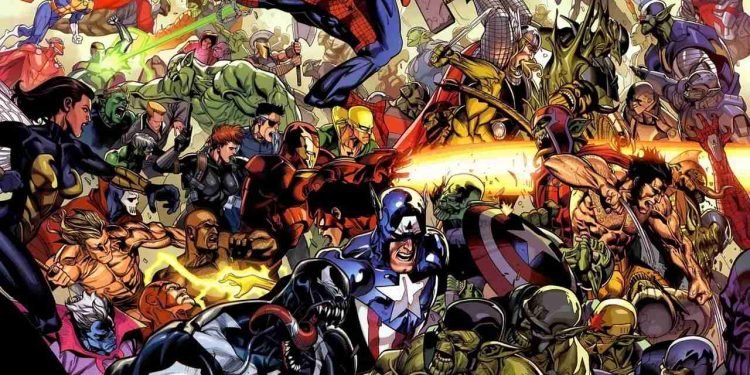 Started in 1939 by Martin Goodman, Marvel Comics dominate the superhero genre today, with the Marvel Cinematic Universe being the most successful franchise ever seen. From its inception to today, Marvel has featured some amazing storylines written by extremely talented writers like Stan Lee, Jack Kirby, Frank Miller, Gail Simone, Mark Millar, etc.

Marvel superheroes like Spider-Man, Daredevil, Wolverine, the Hulk, etc. are household names all around the world. Marvel Entertainment was acquired by the Walt Disney Company in 2009, and since then, the Marvel world has expanded exponentially, venturing into movies, TV series, more comic storylines, and gaming.

Throughout its history, Marvel has created innumerable storylines that are popular among its readers. We have curated a Top 10 list that we believe are the best Marvel Comic storylines the company has written. You may know some of them, or all of them, but we assure you that they are all worthy of their time in the spotlight. So, let’s begin.

Published in 1984 and 1985, the 12-issue story features the Beyonder who transports Earth’s heroes to a planet called ‘Battleworld’, created by him for a contest. The heroes, all attracted to Central Park, called by a mysterious entity, are transported to this world along with select villains. The Beyonder calls upon them to fight and promises ultimate rewards. The heroes and villains of Earth 616 have no choice but to lock heads and see who is left standing.

Secret Wars was the first company-wide event for Marvel. The story utilized several Marvel properties, combining individual superhero arcs and presenting a massive story. Secret Wars became an instant bestseller and sold more copies than Marvel had ever sold. It established the company in the shared storytelling business. This saga followed by a sequel in 1986, and a follow-up story in 2015.

The X-Men have always been a powerhouse bestseller for Marvel, with the magnificent mutants sharing massive storylines and bickering among themselves. X-Men also turned out to be a successful movie franchise, with 13 movies and 2 TV series. With the House of X, legendary writer – Jonathan Hickman takes the mutant world to a whole new level.

The story begins with Professor X (Charles Xavier) declaring the new sovereign nation for mutants – Krakoa. The nation provides a safe haven for mutants, with Magneto as the ambassador. It has an economy of producing new variants of flowers, all having different quirks like teleporting or extending lifespan.

This is Charles Xavier’s master plan to bring mutants out of the darkness that humanity has always sprung upon them. In opposition, a group called Orchis starts planning to protect humanity against the mutants, by what they think is the mutants exterminating humanity once-and-for-all. The consequences of all parties leads to a war of epic proportions, and it is a delight to read the entire storyline (this saga inspired the Days of Future Past movie).

Starting off as an ode to a twisted variant of the Grandfather’s Paradox (more like the Father’s Paradox), in the Age of Apocalypse storyline, Legion goes back in time to kill Magneto but accidentally kills his own father – Professor X.

This paves the way for En Sabah Nur, one of the oldest mutants, to reawaken and realize his dream of world conquest a decade before he was supposed to do that (due to the now changed timeline). Apocalypse’s rule etches a path of massacring millions of humans and establishing mutants as the ruling class.

Magneto, having changed due to Xavier’s death, and having formed the X Men, is the standing force against Apocalypse in this saga. He leads the X Men into fighting the super-powerful mutant, while secretly charging Bishop with restoring the timeline that Legion tampered with.

Age of Apocalypse was a massive success on publication. It popularized the already fan-favorite X Men comics, and to date, it is considered the best X Men storyline.

The Incredible Green Goliath – Hulk, has been immortalized among fans with his primitive yet effective antics. To add on to it, Mark Ruffalo’s portrayal of the character has made him even more loved. However, in the comics, the Hulk has some pretty bleak storylines and World War Hulk takes the cake.

Written by Greg Pak in 2007, it showcases the Hulk being made to feel like an outcast and a problem for Earth instead of a superhero, something he has always painfully realized. Banished off Earth by the Illuminati in a spacecraft that eventually explodes and kills his pregnant wife, the Hulk has revenge on his mind.

He hones his powers of the planet Sakaar (unfortunately, this Sakaar doesn’t have Jeff Goldblum on it) by absorbing radiation. More powerful than ever, he charts his way back to Earth and the rest is history – World War Hulk.

A quite recent addition (2020 – 2021) to the Marvel saga volumes, the King in Black carves a niche for itself by using an anti-hero as the main protagonist and assimilating the rest of the Marvel Universe around him.

Spider-Man 3 introduced everyone’s favorite symbiote – Venom, to the entire world through cinema. Venom has always been a thorn in the Friendly Neighborhood Hero’s webbed side. But in the King of Black, he takes the centre-stage as the world’s savior. This is Eddie Brock at his best!

A warning is dispatched through the universe that something more sinister than Galactus is destroying worlds at an alarming rate. Riding a symbiote dragon, Knull – the God of Symbiotes is on a mission. Meanwhile, on Earth, Eddie Brock senses the arrival of Knull.

The God wants to kidnap Eddie’s son – Dylan as he is possessed of the Symbiote Codex. In his quest, Knull faces Earth’s heroes and either kills or possesses them all. There is only one hope left for the universe – Venom. The saga has received significantly positive reviews so far.

With the Merc-with-a Mouth’s attitude and the mess he always lands himself into, this was bound to happen – he was going to end up killing the Marvel Universe. But the way he does that is a spectacle to experience.

After being admitted to Ravencroft (Marvel’s version of Arkham Asylum) by the X Men, Deadpool falls into the hands of Psycho-Man, who smirks in glee at the opportunity to make Deadpool do his bidding by brainwashing him.

However, the methods leads Deadpool to awaken to new, darker voices in his head, and he starts his murder spree across the planet with Psycho-Man as his first victim. Deadpool becomes Dreadpool (pun very much intended), as he rips apart The Fantastic Four and the X Men, as well as several other heroes. He even manages to massacre the Watcher.

Readers of Deadpool comics know to expect ultimate insanity, but this comic saga redefines insanity and takes the Marvel world to a pretty dark and gruesome place (while maintaining the comic relief persona of the merc).

Before the Russo brothers firmly established the Civil War storyline in our minds, it was the comic saga of the same name that dared ventured into pitting Captain America and Iron Man against each other, thereby fracturing the Avengers. The only difference between the movie and the comics is that the comic storyline is much bigger in its scale and destruction.

In the comics, instead of a Wakanda embassy, an elementary school is blown up, killing children and adults. This leads to the passing of the Superhero Regislation Act, mandating all superpowered begins to be registered and regulated by SHIELD.

Two philosophies emerge from this action, separating long-friends – Steve Rogers and Tony Stark, resulting in them taking their own opposite stands. Factions emerge, and the heroes begin fighting against each other.

In the smack middle of this is Spider-Man, who plays a vital role in the story. There is also some Godly thunder during the war. Civil War also came with a Prelude to Civil War comic book that showcases the build up to the war.

What makes Marvel special is its relatable stories – stories that are dear to common people’s heart. This is precisely why Marvel contains some excellent vigilantes like the Friendly Neighborhood Spider-Man, Daredevil, Jessica Jones, etc. Daredevil: Born Again is one such story.

It deserves this high-up spot for the incredible storytelling it manages while keeping the scale of the narrative small (not planetary or universal). Matt Murdock, lawyer by profession, vigilante by choice, is challenged to the core in this story. His humanity and vulnerability sticks out here, quite obviously. When Wilson Fisk reveals that Matt Murdock is Daredevil, the hero’s carefully managed double-identity is shattered.

Now, all his enemies know who he is, and they come after him with iron vengeance. Battered, bruised, exhausted and challenged to the limits of being human, he has to protect those he loves and cares about. Daredevil: Born Again shows a low point for the Hell’s Kitchen vigilante in a way that has never been shown before, and that is the best-selling point for this saga.

Jean Grey has always been a ticking time bomb for the X Men. With her access to the Phoenix Force, she is one of, if not the most, powerful beings in the Marvel Universe. She has stood alongside the X Men in their tough times, shedding blood and sweat with them and sharing some romantic chemistry with Cyclops and Wolverine.

Jean Grey is powerful, no doubt about that, but what this storyline reveals is exactly how powerful she can be. After coming in contact with the Hellfire Club, Jean Grey accesses the Dark Phoenix Force, a deadly destructive force that even she cannot control. While the X Men try to battle the super villain Mastermind (the mastermind behind unleashing the Dark Phoenix), they witness the purely maniacal rampage of Jean Grey.

She goes on to absorb an entire sun, destroying all life on the orbiting planet, and going on a general genocide spree. The Dark Phoenix is a monumental saga in the history of X Men and Marvel. Remember to bring tissues along for its ending.

After defeating the Elders of the Universe and the In-Betweener, Thanos regains the Infinity Stones and sets out to perform the mission he was resurrected for – to bring balance between life and death.

Thanos has an added incentive to perform this mission – his passionate love for Mistress Death, who he intends to woo. On decimating half the life of the universe, he is opposed by heroes led by Adam Warlock, who want to restore life back in the universe.

Infinity Gauntlet can be considered the best-known Marvel saga all around the world. The MCU immortalized the saga with Infinity War and Endgame, bringing excitement and joy to many fans and laying down a massive legacy for further storylines.

There you go- the 10 best marvel comic storylines of all time. All these years, Marvel has shown us wonders with its spectacular comic storylines and amazing live action adaptations every year.

So, what do you think about the list? Do you agree with the list? Or do you have any other titles on your mind? Let us know your thoughts in the comment section below.

Anurag is a law graduate who decided that his love for words far outweighs his love for the courtroom. He wandered about a bit, ran an electronics company, launched a brand of alkaline water dispensers, and then decided to accelerate on a different highway – writing. He writes fiction, mostly, and has published a poetry book called "Of Love, Wisdom, and Human Folly." In his spare time, he binges on anime and comics. He is a huge Batman and Spiderman fan. He lives in Pune with his wife, mother, and two ferociously cute cats.