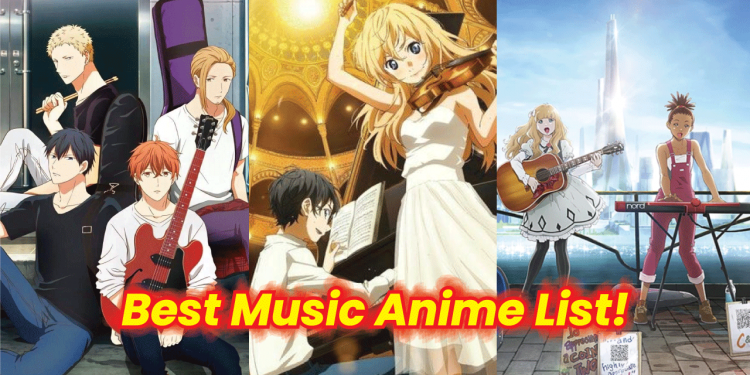 Music has the power to cure diseases that are not even possible with science. For example, listening to music could easily take our stress away instead of a pill.

If you have watched some anime shows like Haikyuu, from which you got inspired to play volleyball, how about watching a music anime? These music animes will definitely spark an interest in you.

So, we’ve compiled a wonderful list of music anime that can calm your stressful hearts and make your life better. Let’s get in then!

Haruka Nanami enrolls into Saotome Academy to achieve her goal of writing aspiring music for her beloved idol, Hayato Ichinose. But it feels almost impossible for her after getting into it.

The academy is filled with talented people, and the competition is so fierce. She strives so hard to make it through all of the obstacles, but she holds a secret that could turn silence her ambitions forever.

On the surface, this anime is a reverse-harem anime with a normal plot. But it is much better than what you think. Well, there isn’t any actual romance, to begin with.

The openings, endings, and background osts are perfect. Would you expect anything less from an anime that focuses on music? So, if you haven’t watched it yet, we recommend you do it sooner.

Kanata Sorami is a young Private in the army, and she comes to Seize to work in Clocktower Fortress. She also learns to play trumpet under Sergeant Rio Kazumiya.

Although peace is not yet an option for the world, she still finds a relaxing routine, and with her music, she brings joy to the war-weary residents. How beautiful is it to find such relaxment in such a world?

Sound of the Sky is one of the anime shows that hooked me up so fast. The world it introduces is completely unique, and it would be pretty hard to find a similar one.

But the world-building isn’t the focus instead the characters make it even more impressive. The animation is very delicate, showcasing the minute details, and it is a beautiful music anime.

Tsumugi Takanashi has become manager of the agency’s new male idol group, and her father orders her to cut four members from the group containing seven members.

But after the audition, she comes back to her father and declares that she refuses to cut any one of them since they all have unique personalities. That begins the start of the IDOLiSH7 band into the world of idols.

If people brush this anime off thinking it’ll just be another reverse harem anime with a bit of music in it, then they’re mistaken. You just need to watch a couple of episodes to get hooked.

The soundtracks in this anime are freaking addictive, as you’ll never stop humming whenever you hear them. The amount of love the creators put into making this anime is boundless.

Euphonist, Kumiko stopped playing music since an incident took place in middle school. Now she enters high school hoping to get a fresh start in her life.

Due to the school’s brass band, she decides to make a comeback into her musical career. But with the competition and her lack of practice, will she be able to qualify for the national band competition?

Kyoto Animation always creates miracles with its magical animation and the stories it chooses. Hibike! Euphonium is one of the gems, and it perfectly captures the concept of realizing one’s dream.

This anime marked as a grand return for KyoAni since most people used to underestimate it back then. So, it is an amazing music anime that you must watch at least once.

It’s the first day of high school for Yui Hirasawa, and no club seems to spark an interest in her. But somehow, she misinterprets light music club and joins in it.

When she finds out, she wanted to apologize and quit the club members play a piece of music for her. From then on, Yui loves to mess around by playing all kinds of instruments and discovers her passion for music.

K-On! is a simple anime with an average storyline and silly characters. But why is it on the list of best music anime? Simple. For anime shows like these, filler scenes bring out the beauty in them.

The characters are very likable from the beginning, and the main character is too cute to ignore. If you want some refreshing anime that focuses on music, try this one out.

Fourteen-Year-Old Koyuki is an ambitionless boy with no goals in his life. But when he saves a dog from a group of harassing local kids, the dog’s owner Ray, an emerging guitarist, takes an interest in him.

Later, when they meet again, Ray shows his guitar skills and sparks an interest in Koyuki. Along with Ray’s younger sister Maho, they form a band named “Beck,” and their journey begins.

Beck is a type of anime that isn’t everyone’s cup of tea. It shows what it’s like to have a dream in life and not having one. If you’re into music, then this one is a must-watch for you.

It has beautiful writing as you’ll find many lovable moments in it. Unlike other music anime shows, people who aren’t into music might not be able to enjoy it as much.

Negishi Souichi always wanted to join a trendy pop band and perform music like his idol, Kahimi Karie. To make his dream come true, he leaves his countryside to study in Tokyo.

Later on, he did join a band but not quite what he was expecting. As the Detroit Metal City’s lead singer, he had to perform loud songs. But in the end, he does anything to put on a good show for his fans.

It’s rare to find a music anime that focuses on humor. Detroit Metal City does everything exceptionally, including pace and voice acting. These aspects deserve awards.

The only disappointment you’ll be having is that this anime is short, with only 12 episodes and 13 min each. Regardless, it is an exceptional music anime you need to watch at any cost.

The story takes place on Mars, where mankind migrated there 50 years ago, and people live in comfort due to AI. Carole makes her living by playing her keyboard every day.

On the other hand, Tuesday has run away from her wealthy family to pursue her musical career. Will these both become the greatest duo who will create a miracle on Mars?

Seriously, you don’t need to have a good sense of taste in music to love this anime. The crew managed to capture the essence of the music industry and made it as realistic as possible.

It shows how a passion for music could bring two people together and bring change into their lives. So, if you have been searching for some wonderful music anime series, try this one out.

Nana Komatsu travels to Tokyo, leaving her peaceful life chasing her boyfriend, Shouji Endo. On the other hand, Nana Osaki is a punk vocalist of a band with similar background boards on the same train.

Through the meeting, they both end up sharing the same apartment, and soon, they both become closer to each other. Both support each other in tough times but can this bond be like this forever?

Nana isn’t just about music but how it can change one’s life. One of the best things about this music anime is its characters. It has one of the best openings and endings too.

4. Kids on the Slope

Kaoru Nishimi wasn’t able to find friends because of his constant moving of schools thanks to his father’s career. When he moves to a new town, he finds everyone being antagonistic to him in the class.

However, two people Sentarou and Ritsuko, never mind about his background and befriends him. As they discover Kaoru’s passion for music, they begin to make his life better by dragging him into their joyful life.

This one is a kind of anime where Mc feels lonely and finds light in his life because of friends, but with the concept of music. The story includes music, friendship, and love themes.

Although the story moves a bit quickly sometimes, it ends up taking a step back to balance it out. Overall, a fantastic music anime that teaches the values of friendship and life.

Shinichi Chiaki is a talented musician, and he always dreams of playing among the elite in Europe. But the only thing that stops him from doing so is his fear of flying, and somehow he ends up grounded in Japan.

Now he’s in his fourth year at Japan’s top music university. There he meets Megumi Noda, and when she plays piano, he gets impressed by her. Could she be the one to bring a change in his life?

Although this anime seems a bit similar to Your Lie in April on the surface, it varies a lot. The story is exceptionally good with a great mix of comedy, music, romance, and slice-of-life concepts.

It is a compelling anime with a masterful depiction of love. Probably you’ll find everything in this anime that you couldn’t in other music anime series.

Mafuyu Satou used to love playing guitar, but somehow he lost his appeal. But when he encounters Uenoyama, his interest in music sparks again, and joins in the band.

Although at first, he learns guitar, later Uenoyama recognizes his talent for singing and makes him the lead singer. How will this beautiful and emotional journey end?

Given is one of the most beautiful anime shows I’ve watched. At first, I was hesitant, but later, I was glad for picking it up again. The romance in the show will make your heart pound, and yes, it is bl.

The characters in the anime are everything because you literally love them to the point you can’t afford to finish the anime so soon. So, if you’re looking for a good music anime, this one is for you.

1. Your Lie in April

Kousei Arima, a piano prodigy known for his unrivaled talent, suddenly stopped playing it after his mother passed away. Due to this trauma, he has been away from music for two years.

Now he’s thirteen years old, and one day he meets a girl named Kaori Miyazono under the full-bloomed cherry blossoms. Could this girl change his life once and for all?

Before you watch this anime, make sure to grab a box of tissues and lock yourself up in the room. Otherwise, it would be embarrassing, if anyone sees you bawling your eyes out.

It is a masterpiece of the music genre and hits you right in the feels. Every episode makes your heartache, and at the same time, it feels so beautiful. We suggest you never miss out on this gem.

Music anime shows are something. Some make us cry, some bring happy tears, and most of them are filled with refreshing concepts. It’s not surprising that many people love this genre.

We’ve tried our best to make a list of music anime to immerse you completely, and after watching a few shows from the article, you’ll be glad for spending the time with them.

So, what do you think about our list? What’s your favorite music anime series? Let us know what you think in the comment section below.

13 Best Post Apocalyptic Anime to Watch Before the World Ends!