13 Best Post Apocalyptic Anime to Watch Before the World Ends! 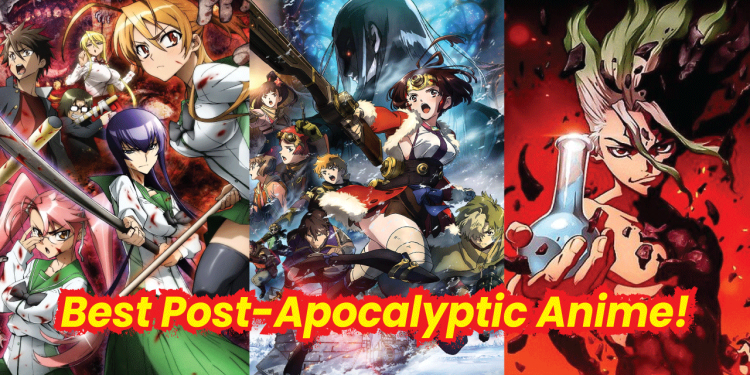 Apocalypse is humanity’s worst enemy. Everything we have achieved until now will go to waste; whether it be a zombie apocalypse or alien invasion.

If we have to survive in such a world, shouldn’t we, at least, grasp basic knowledge about it? Watching post-apocalyptic anime can help you with that.

So, we’ve compiled a list of post apocalyptic anime series that you can watch before the world ends, and with unique concepts, they bring out, you’ll love them till the end.

13. High School of the Dead

When an infected person arrives at a school, the majority of the students get turned into zombies. The whole school is a bloodbath, and even the outside world is the same.

Together with a few survivors, Rei and Takashi set out to find their families, while facing these dangerous zombies. Will they make it or end up getting eaten by these things?

High School of the Dead is a gold standard anime because there weren’t many movies or anime shows with such a caliber. It depicts everything perfectly, including some minute details.

Although it contains lots of ecchi scenes, those only act as moments to refresh us. It is action-packed, thrilling, and even though it has a single season, it’ll be worth the watch.

12. Kabaneri of the Iron Fortress

The world suddenly turns during the industrial revolution, and undead monsters are everywhere. The remaining survivors of mankind protect themselves by building walls.

If bitten by them, you become one of them, and the only way to kill them is to pierce their heart with an iron plate. From one station to another, hunters travel and face lots of obstacles.

Kabaneri of the Iron Fortress is such an underrated gem. In just 12 episodes, it gives you a perfect mixture of action and a standard storyline. There is no end to surprises as well.

If you love Attack on Titan, this one will be a great ride for you. There are more than a few epic moments to make your eyes wide. So, if you’re looking for a post apocalyptic anime, try this one out.

The story takes place in a futuristic world where a global ecological catastrophe has doomed the planet. People have built the domes, and living in them since life outside is virtually impossible.

While they live with humanoid robots, these robots begin to gain self-awareness due to a mysterious virus. To investigate this matter, Re-I Mayer is assigned, and soon she discovers humanity’s darkest sins.

Ergo Proxy is a great post apocalyptic anime with a complex plot. For the first few episodes, you won’t be having any idea where the plot is going, but if you wait for a while, it’ll be worth it.

It has a few flaws, but they won’t be enough to stop you from watching the anime. So, if you haven’t watched this one yet, consider watching it.

The story takes place in a post-apocalyptic world overrun with beasts known as “Filth Beasts.” Zuellni is an academy in one of the cities where the next generation of warriors gather.

The leader of the 17th Platoon decides to recruit only the best and discovers the hidden ability in Layfon Alseif. But what if Layfon joining could bring more troubles than benefits?

Chrome Shelled Regios is a great anime, and I mean not just in the post-apocalyptic genre. It never stops to entertain us either with humor, action, or screenplay.

In the end, you’ll wish it had a sequel or at least a movie. So, if you’re searching for a good post apocalyptic anime to get rid of your boredom, try watching this one.

9. Darling in the Franxx

Humanity gets driven to near-extinction by beasts known as Kalxosaurs. People live inside the fortifications known as plantations and defend against the beasts using Mechas known as Franxx.

Hiro fails the aptitude test and while in depression, he finds a two-horned girl as she introduces herself as “Zero Two.” Due to an incident, they both pilot a mecha, and Hiro’s future changes from this moment.

Some people say Darling in the Franxx is overrated while some love it. Regardless, if you’re looking for a post apocalyptic anime with good entertainment, this one is all you need.

It has numerous flaws but it still managed to pull it off in providing what exactly the audience needs. Instead of just focussing on the action, it gives a lot of space for love stories and friendship.

8. Seraph of the End

A mysterious virus kills all the adults on earth, and soon vampires occupy the place to enslave the humans. The people under age 13 have become a source of blood for them.

After a few years, Yuichiro and his friends get sick of being livestock and attempt an escape. Except for him, everyone dies, and he meets humans outside. Will he get his revenge?

Seraph of the End is a really good post apocalyptic anime with some incredible action sequences. The story pulls you in right from the beginning and never makes you bored.

As episodes pass by, you’ll witness plot twists, and the ending could really make you go crazy. Thus, it is an excellent post apocalyptic anime you need to consider watching.

The tale of two girls Chito and Yuuri while they travel through the desolated landscapes scavenging food, water, and fuel. The world they wander is a lonely one since only these two are survivors.

Although it is tough to live in such a world, they both find happiness in little things such as military rations, hot baths, etc. Even though the whole human civilization perished, these both can find something to live.

If I had to sum up this anime in one word, it’d be bittersweet. It might not have action scenes, a thrilling plot but if you’re having a stressful and hateful life, this anime could change your life.

I mean what can inspire more than a story that summarizes to find something you can leave for, even when the world ends. So, if you haven’t come across this short anime, consider yourselves lucky.

6. From the New World

The story takes place after a thousand years where humans live using psychokinetic powers and with the aid of monster rats.

From the Sage Academy, a school for psychics, Saki begins to question the fate of the people who can’t awaken their psychic powers. In the process, he discovers even more shocking truths about society.

Have you ever watched an imaginative and thought-provoking post apocalyptic anime? If not, then this is the exact anime you’re looking for. You probably have never watched something like this.

Although this anime isn’t much popular, such an amazing story shouldn’t be overlooked. With sublime characters and execution, it isn’t something you can just ignore.

Princess Patema is a curious girl, and one day she explores tunnels underground after finding out that someone has gone missing. However, she gets startled and falls into a pit.

She finds herself on the surface and discovers that the world is literally turned upside down. As she was about to get swallowed by the sky, a boy named Age saves her. Thus, their journey has begun in this weird world.

Firstly, this anime movie deserves a lot of praise for the concept alone. It is definitely a unique take on the post-apocalyptic genre, and the execution was perfect.

The animation was great, and it always makes us curious about what’ll happen next. So, if you got curious by reading the synopsis, you’ll definitely go for the anime.

Simon has lived a boring life in the underground village, and his job is to dig out tunnels. One day, he finds a mysterious robot, and together with his friend, Kamina, he flies out to the surface.

But they face far stronger enemies on the surface, and with this one, their fight for humanity has just begun. But how are they going to win over such strong enemies?

Gurren Lagann is a masterpiece of the Sci-fi genre (at least in my opinion). The post-apocalyptic setting is unique, and literally, every aspect has its positive traits.

If you want a fully action-packed post apocalyptic anime, then you shouldn’t be missing this anime at all. So, I guess you should go and watch this anime right now.

3. Nausicaa of the Valley of the Wind

Thousand Years have passed since the nuclear war named “Seven Days of Fire” had taken place. Although most of the land is still affected by toxic substances, “Valley of the Wind” is an exception.

The princess, Nausicaa finds an airship from the Kingdom of Tolmekia crashing onto their land. As they intend to revive a weapon, she does whatever it takes to stop them.

Hayao Miyazaki always brings us masterpieces and this anime movie is one of them. Released in 1984, it is the second movie of Miyazaki and one of the best movies in his career.

Seriously, this anime is an underrated masterpiece. You rarely get to see eye-catching animation from the 90s anime. It is truly one of them and you’ll love it for sure.

When humanity goes extinct because of man-eating giants, a small portion of leftover people live by barricading themselves within the walls that can defend against these giants.

However, to everyone’s surprise, a Colossal Titan appears and destroys the first wall. Losing his mother, Eren retreats to the next wall and since then, he determines to exterminate titans.

Attack on Titan has to be the most intense post apocalyptic anime out there. The plot is standard, plot twists are simply mind-blowing, and action scenes are epic.

It captures the true essence of the apocalypse but takes it in a unique way. So, if you haven’t watched this fantastic post apocalyptic anime, now’s the time you do it.

A mysterious phenomenon takes place on earth, and the whole of humanity gets petrified. After 3700 years, Senku, a science geek, wakes up due to a mysterious liquid.

Soon, he decides to revive humanity along with his best friend, Taiju. But will it be possible with just the two of them? Especially, when there are foes who don’t want that to happen.

Dr. Stone is a fantastic and unique take on the Apocalypse genre. If you love science, you’ll probably watch this anime twice or thrice. It depicts how Senku reinvents all the needs with exact details.

It is action-packed, mysterious, hilarious, and definitely a wonderful post apocalyptic anime you need to watch at any cost.

Post Apocalyptic genre conspires of numerous concepts and every one of them weighs a lot. If you’re into this genre, then you’re one of those people with the best taste out there.

These anime shows capture the true essence of events on how the world becomes when an apocalypse actually takes place. So watch these and ensure your survival.

Have you been watching a lot of these anime shows or movies? If so, what’s your favorite? Let us know what you think in the comment section below.

“The World's Finest Assassin Gets Reincarnated in Another World as an Aristocrat” postponed to October Tentatively!

How to Watch Anime for Free in Any Country! (Legally)

Fourth Season of Seven Deadly Sins Anime has been Delayed to COVID-19!