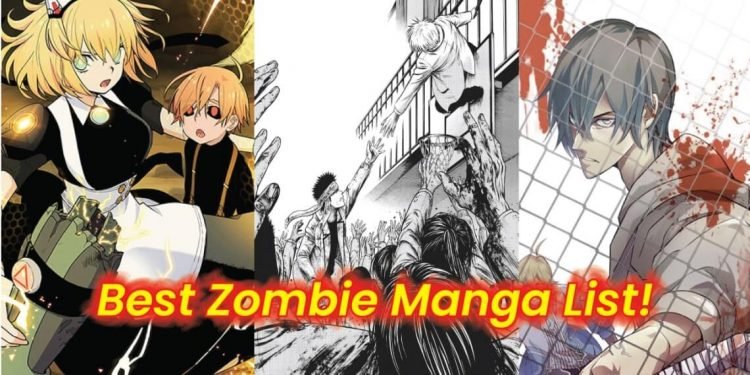 Zombie genre is loved by so many people (including me). In fact, I read all the zombie-related manga I can find on the internet and would love to read even more.

So, are you a zombie genre addict like me? Do you love to see characters survive an apocalypse while surrounded by scary zombies?

If so, you’re in the right place. With the experience I have in the zombie genre, we’ll be going through some amazing zombie manga recommendations. So, let’s get into the article!

Makota, Yuuya, and their classmates are sailing onboard the sea on a ship. Everything is going well until things went wrong while they’re back from the trip.

Suddenly, the ship is filled with undead monsters, and they kept eating the humans in the ship’s hallway. They must survive the night to find out what exactly happened and how they can escape.

Cradle of Monsters is a unique twist on the zombie genre. The time limit the school kids count on makes it even more thrilling.

I’m a lover of the zombie genre. So, obviously, my opinion is a little biased, but this one is a great manga. If you haven’t read it yet, why not give it a try?

Shin Jaerim have been in zombie-related nightmares for two years now and soon, the nightmares became real. The world has changed, and he’s given a quest to save the world by eliminating all the zombies from the world.

With a game-like system, where it gives experience and skills for killing zombies and mutated creatures, Shin Jaerim begins his journey to save the world. But it is going to get challenging.

All Rounder was a surprising read for us. It felt like an ordinary zombie manhwa initially, but later on, the author added some interesting plot twists and MCs abilities, weapon of choice and the characters are so fascinating. You’re sure to have a great time reading this Zombie LitRPG manga.

The MC in this manga is ill, and after knowing that he had cancer, he lost hope in his life. To his surprise, a zombie outbreak took place, and the situation became even worse.

His life became hell as their family is struggling to survive, but when he got infected, a miracle took place. What could it be, and how is it going to help him?

Eschaton Game manhwa might not be to everyone’s taste because rather than focussing on the action, it gives importance to the character’s emotions and growth.

It has good artwork along with a standard plot, but the only thing it lacks is entertainment enough to satisfy the reader. Regardless, you can enjoy this zombie manga.

Jingook Yeo gets trapped in his house in a zombie apocalypse along with her mother, who has already turned into a zombie. Now he has no hope, and he can’t kill her as he loves her so much (who wouldn’t?).

But when a girl from the opposite apartment sends him food and water through arrows, he finds a small hope. Soon, along with the girl, he tries to escape to a safe place.

Dead Days is a masterpiece when it comes to artwork. The story might be average, and the characters might not be very likable, but it has realistic art.

It also depicts the apocalypse realistically, and if you love seeing people survive in a zombie apocalypse, then you’ll love this amazing zombie manhwa.

Chihiro loves horror films and often collects them a lot. He also dreams of watching them with a hot zombie chick. When his pet cat dies, he can’t bear it and performs a resurrection to bring it back.

However, there he accidentally meets Rea, a beautiful girl who’s having troubles in her life. Somehow she gets affected through the ceremony and gets zombified. Did his dream come true?

Sankarea is a weird zombie rom-com because it involves a romance between a man and a zombie. It has some playful ecchi scenes, and humor is great too.

It isn’t your typical zombie manga featuring an apocalypse, but if you’re looking for something unique or weird in this genre, this should fit right in.

Tim Muley always loved playing video games, especially the one with zombies. One day, he typically returns from school but discovers a shocking truth in the neighbor’s garden.

Soon, many videos of infected go viral, and a pregnant woman gets chased by a creature. All these events point to one thing: The Zombie Apocalypse.

I love how this manga covers the concept by minding the characters. The plot is innovative, and if you have been reading zombie stories for a while now, you’ll love this one.

It covers elements such as horror, fantasy, mystery, and post-apocalyptic thrill. If you haven’t come across this one yet, you better read it now.

7. High School of the Dead

When an infected person arrives at Rei‘s school, the whole campus turns into a bloodbath as most people turn into zombies. It seems that the outside world isn’t safe anymore either.

Rei along with a group of survivors breaks through the hordes of zombies and travels along the city to find their parents. But can they survive in this world filled with man-eating zombies?

Highschool of the Dead is an epic zombie manga with some legendary scenes such as a sniper scene (you’ll know once you read it). It depicts an apocalypse perfectly.

The only drawback you’ll be facing is the author has passed away even before finishing it. Regardless, with tons of ecchi and action moments, there isn’t a moment you’ll get bored while reading it.

Maeda has been falsely accused and sent to prison. There he meets a group of delinquents who later become friends with being weirdos.

One day, a van containing infected crashes into the prison, turning it into a bloodbath. Now Maeda, along with his cellmates, has to survive where the outside world is even more frightening.

Fort of Apocalypse is an amazing take on the zombie genre. It has astounding characters, and their development is good too.

The concept is really cool, and this could become one of your favorite zombie stories. So, if you haven’t read this zombie manga yet, try reading it now.

5. Mortals of the Doom

Zuo Tianchen remained the sole survivor after living countless years in a mutated zombie world. But somehow, he reached his end, and right when he was about to die, he gets back in time.

Now he knows that a zombie outbreak will occur in a few moments, and with his knowledge, he’ll do anything to survive and protect the ones who sacrificed their lives for him in the past.

Mortals of the Doom wasn’t my type of manhua at first. For the first fifty chapters, it was okay, and even after that, some scenes kept me bored.

Somehow I put up with that, and the result was great. I ended up liking it, and the concept of cultivation in a zombie world sure sparks your interest, doesn’t it?

Hideo Suzuki is a manga artist whose life has been tough due to economical problems. His girlfriend even hates him more because of their situation.

But when suddenly a zombie outbreak happens, he decides to put his firearm skills in use to survive. Can he really become the cool hero he always wanted to be?

I am Hero has a solid story, and it won’t disappoint in the slightest. I first watched the movie, and it was great, but later when I caught up with the manga, I was pretty much fascinated.

The artwork is quite impressive and detailed. If you haven’t been able to find a good zombie manga in a while, this could quench your thirst in the short term.

3. Kabaneri of the Iron Fortress

The world suddenly changed during the industrial revolution, and there is undead everywhere. Fewer people began to live through fortifications along with stations to communicate.

Only Hayajiros can travel between the stations and always face the undead. Ikoma, the young worker who lost his sister to zombies, discovers a new weapon to kill these zombies.

Kabaneri of the Iron Fortress is such an underrated anime/manga. Although it is a lot similar to Attack on Titan, it drives the concept really well.

The action scenes are top-notch, and if you’re looking for a zombie manga with a complex plot, then this one should be to your looking.

Takeya Yuki loves her school so much, even to the point she stays there more than anyone. Along with a few other girls, she creates a “School-Living Club,” and they camp at night there.

However, what if a zombie apocalypse takes place in this school? Especially when there are no one except the group of these cute girls?

School-Live! is a manga that gives a “Don’t Judge a Book by Its Cover” kind of vibe. At first, you’ll think it is an innocent and cute manga filled with funny characters. But eventually, you’re wrong.

The more you read, the more you’ll be surprised. If you have already watched the anime, we highly recommend you try reading manga for more entertainment.

The story takes place in the near future, where Artificial Intelligence (A.I) becomes a common thing for humans. But when a zombie outbreak occurs, A. I begin to break away since they don’t recognize creatures as humans.

But the AI Housekeeper Hasty somehow gets attached to her master’s final words and decides to find a cure no matter what happens. Even if it has to fight against the whole world who are trying to exterminate them.

Housekeeper is one of the best zombie manhwa I’ve read with a solid plot. Most of these mangas don’t present us with a perfect setting and often mess up the story halfway.

However, you don’t have to worry about that because this one will keep you entertained till the end. In my opinion, it is pretty much underrated.

If you’re a zombie story lover like me, this list is everything you need. It has every concept from thrill to humor so that you can enjoy different stories in one place.

So, what do you think about our list? What is your favorite zombie manga/anime? Let us know what you think in the comment section below.