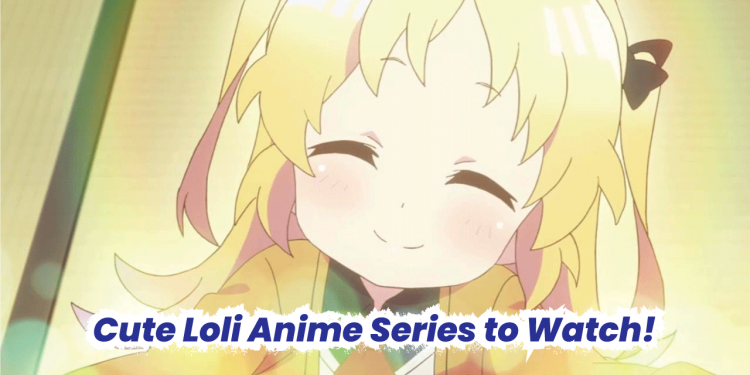 No matter what your taste in anime, you can’t help but feel pleasant while watching cute anime shows. Especially when it features cute loli characters like Shiro, Kanna, etc.

If you have been looking for some good loli anime series, then you have ended up in the right place. Because we are here to recommend you the best loli anime shows with our article.

Aoki Daisuke is a 3rd-grade teacher, and a moment of kindness makes one of his students, Rin Kokonoe, fall in love with him. Soon, she begins to seduce him in every class.

Although she is just a child, her knowledge is beyond her age, and she also seems to be hiding her intention. How will Daisuke deal with this situation?

Yes, this anime has lots of ecchi scenes, which is despicable because it isn’t appropriate. But the reason why it is on the list of loli anime shows is that it has cute lolis.

Almost every main character acts cute in every scene. It is fun, a bit weird, but overall, you’ll love the character “Rin” and can’t help but fall in love with her.

Subaru Hasegawa‘s dream is to become one of the best basketball players, but he had to give up on it due to an incident. He even stopped playing basketball.

One day, his aunt invites him to become a basketball coach for sixth-grader girls. From here on, his new journey begins as the team defeats strong opponents along the way.

You rarely get to see lolis and basketball in a single anime. Instead of witnessing an epic sports anime, you’ll witness some cute loli characters playing adorably.

Although Basketball is just an activity to bring everyone together, it also has a solid plot. So, if you’re looking for some cute loli anime series with a standard plot, this one is for you.

Illya always loved magic girls, but she loves her brother even more. She always wishes that he’d pay more attention to her, and when a talking magical wand appears, it seems like her dream might come true.

Although she is hesitant at first, later ends up becoming a magical girl. But she needs to capture some powerful items to make sure her wish is granted.

What happens when you pick a stupid storyline and turn it into a cute loli anime? Simple, you get a spectacular anime like Fate/Kaleid Liner Prisma Illya.

Although it has lots of yuri kiss scenes, it feels cuter. Everything Illya does makes you blush, and if you’re into yuri, there is no end to how much you’ll love every episode.

Asahigaoka is a countryside that might seem boring to most people, but it has become more colorful thanks to five students who go to the only school in town and sit in the same class.

When Hotaru transfers there, she seems it would be boring. But she never thought that her life is going to be filled with excitement and happiness with these girls.

Non Non Biyori is a basic concept, but people who watch it still wonder why it is so good. It is a beautiful and laugh-out-loud anime you can watch if you’re looking for a refreshing anime with a cute loli.

This anime will make you smile at least 50 times, and even if you have never watched a slice of life anime, you’ll still love it till the end.

9. WATATEN! an Angel Flew Down to Me

Miyako is a college student with a shy personality and also an Otaku. One day, she meets some angelic grade school kids and finds her friend Hana’s little sister extremely cute.

From that moment, her heart won’t stop racing, and she tries to get along with them but fails in the end. Watch how Miyako tries to approach a super cute girl with her shy personality.

This one is basically “college student is attracted to an elementary school girl.” It may sound weird to you, but if you view it from a different perspective, it is super cute.

Although Miyako falls in love with a loli, it doesn’t matter much to us because it only gives us more cute and blushing moments. So, if you’re looking for a cute loli anime, try this one.

Tsuchida starts working at Hanamaru Kindergarten as the first male teacher, and he’s actually quite nervous. Unfortunately, his first day doesn’t go well as a small girl named Anzu claims that he hit on her.

Though he manages to clear this misunderstanding, the next day, Anzu comes with another plan to prank him. Can he put up with her and other kids while winning the heart of a beautiful Yamamoto-sensei?

This anime is carefree, funny, and heartwarming, yet it is more than just a slice-of-life comedy. It never gets serious but always conveys the beauty of life to the viewers.

It has good writing, hilarious gags, and you can’t possibly get satisfied with just 12 episodes. And why is that? Because it is one of the cutest loli anime series out there.

Satoshi Yabe joins the Kamohashi Elementary school as the new teacher with great expectations. Unfortunately, he gets assigned to the class 6-3 that houses violent Marui triplets.

The girls pull all sorts of pranks on him and even try to hook him up with a busty school nurse. Man, how’s he going to deal with such unfortunate consequences?

If you’re looking for a cute loli anime that can make you sit back and laugh, then you might as well go and watch this series right away.

It’s filled with funny moments and the characters being unique personalities makes it even more enjoyable. You need to watch these kinds of anime shows once in a while.

Umaru is a perfect high school student as she works hard, gets good grades, and even kind to everyone around her. At least that’s how she appears on the outside.

Once she reaches home, she wears her bunny hoodie and lazes around playing games and all kinds of Otaku stuff. Witness how she turns into a cute loli character when she’s at home.

Technically, Umaru is not a loli, but her personality in the anime is literally the cutest. I mean, she’s a complete loli at home and a normal high school girl outside.

Every episode makes you laugh and feels so refreshing. If you’re looking for a cute loli anime and haven’t watched this one yet, now’s the time.

Shogi is a popular game in Japan that is similar to chess. If one becomes a professional player and reaches the pinnacle from the competition, they’ll be given the title “Ryou (the dragon king).”

Kuzuryuu is a teenager who managed to win that title, and one day, a shogi-loving elementary school girl claims that he promised to make her his disciple. Thus begins the relationship of a master and a disciple.

This anime has a lot of fan service, and you might have heard a few negative reviews about it. But if you’re looking for a cute loli anime, you probably can’t find a better one.

Charlotte is literally the cutest character out there (even competes with Kanna Kamui). It has lots of fluffy moments, and you can’t help but adore the characters.

Strawberry Marshmallow takes place in an elementary school following a group of girls named Chika, Matsuri, Miu, and Ana. Instead of focusing on studies, they’d rather have fun.

They hang out, learn English with Ana, who is born with foreign skills, and do all kinds of cute things. Every moment of their lives is filled with happiness.

As we have already known, a plot isn’t really essential for an anime to be good. It is the same case with this loli anime. It just shows us the cute little things the girls do but in the most beautiful way.

While watching this anime, you’ll smile more than no. of times you’ve laughed. It is a slice-of-life comedy anime with cute loli characters.

The story follows a group of six girls with different personalities who are around the age of ten. These friends share their laughs and good times in their high schoolroom.

With scary teachers, exciting school fests, and cute stunts they perform, there isn’t a dull day in the lives of these students. What a beautiful life, isn’t it?

Azumanga Daioh is nothing when it comes to the story, but the characters take the anime to a whole new level. The hilarity is the one thing you can’t afford to miss from this one.

It has cute characters that’ll make you blush once in a while. Even though you’re not into slice-of-life anime shows, this one will suck you in right from the first episode.

Kobayashi is an average office worker, but due to her workload, one day, she gets drunk and somehow ends up saving a dragon that has been injured.

The next day, the dragon introduces herself as Tohru and requests to work as a maid to pay her debt as gratitude. Will Kobayashi’s life changes from here on?

Miss Kobayashi’s Dragon Maid is loved by the audience mostly because of a single character: Kanna Kamui. She’s literally the cutest character you’ll come across because every single thing she does is damn cute.

The story is a nice slice of life mix with a little comedy in it. The animation is so beautiful because it is done by Kyoto Animation. Thus, it is one of the cutest loli anime series you’ll come across.

Tomoko is studying her first year in high school, and she owns three cats. Her shy personality doesn’t allow her to become friends with others, but cats are her best friends.

When she befriends Azumi, who also loves cats, a cute and fluffy comedy about their daily lives begins to take shape. Witness the pure friendship between the cats and this duo.

If you need your soul to be cleansed right now, watch this loli anime. Not just that, it can even cure your depression when you’re going through tough times in your life.

It is so sweet, cute, and wholesome. On a scale of 100, I’d give 100 for the cuteness of the characters alone. It is very short, but every second keeps you entertained.

I guess this is it for the list as we reached the end. If you love cute loli characters (I mean lolis are always cute), then this list will help you have some warm laughs.

So, what do you think about our list? What’s your favorite loli anime series? Let us know what you think in the comment section below.

Will There be One Punch Man Season 3?