Top 10 Cutest Horimiya Moments You Can Never Get Over Watching! 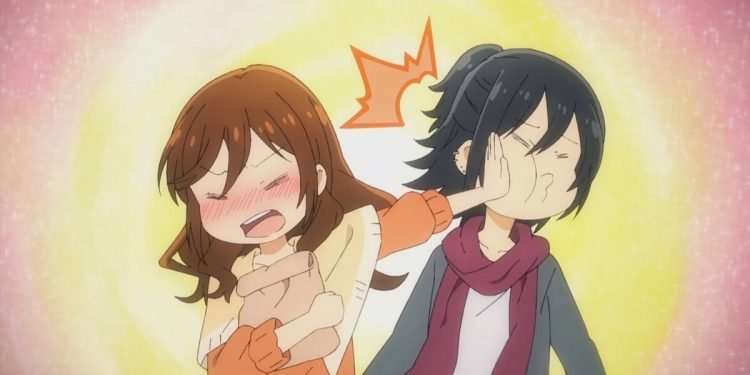 ‘Hori-san to Miyamura-kun’ or ‘Horimiya’ is a slice of life Japanese shōnen web manga written by Horiki Adichi. The anime adaptation of the anime was aired in the year 2021 and was the most talked-about anime of the year.

It focuses on Kyouko Hori and Izumi Miyamura’s high school life. Both are very different individuals who find solace in each other’s company. Hori is a teenage girl who is popular, good at studies and looks after her younger brother as well as the house they live in as her parents are working most of the time.

While Miyamura is a quiet, mediocre student who keeps to himself. He has a total of nine piercings which he gave himself, along with tattoos on his body. The series follows the friendship between them and how it blossoms into love. It gives a glimpse on high school love and the uncertainty of entering into adulthood.

Horimiya has various cute moments throughout the series, some of the best Horimiya moments are mentioned below.

The first episode has various cute and funny moments. When Sota, Hori’s younger brother, injured himself, Miyamura brings him home where he meets Hori outside school. Due to his exposed piercings and the hairdo, Hori cannot recognize him instantly.

The next day at school, Hori asks Miyamura to visit her brother as he has been asking about him. Miyamura thought that due to his piercings and hair, Hori would not like to be associated with him. To this, Hori replies that she does not care, which causes Miyamura to blush.

The following day, there was a sale on eggs that Miyamura was hurrying to reach. On the way, Yuki, Hori’s friend, saw Miyamura. Hori later said that she does not want anyone else to see the cooler side of Miyamura, and he responded that he too does not want to see the ‘homely’ side of Hori. She gets flustered and couldn’t stop herself saying “baka”. Both consider their time spent together as special. This was the beginning of a new friendship between the two.

Episode two shows that Hori and Miyamura like to spend time at Hori’s house every day. When asked by her mother, Hori realizes to her horror that she doesn’t know what Miyamura’s first name was. And she felt too awkward to ask him directly.

Thus, a hilarious effort ensues where Hori tries to find his first name through various means like trying to find the attendance sheet, peeking into the boys changing room, etc.

She gathers her courage and asks Miyamura directly back home, and that is how the viewers come to know that his first name is Izumi. To save her face, Hori asked Miyamura if he knew her first name, thinking he does not, but he casually replies that it was Kyouko. This leads to Hori being more embarrassed.

Hori is a member of the Student Council who does most of the work given to her diligently. She is made to do other people’s work, which she doesn’t seem to mind. Remi, another member of the student council, rushes through the corridor and crashes into Miyamura and drops some papers.

In a hurry, she gathers all she could and asks Miyamura to throw whatever was left. Miyamura discovers that those were the budget reports that Hori was working on recently. The next day, the student council is blaming Hori for losing the report and asks for her apology.

Miyamura could not  take it anymore and headbutts the President of the student council and tells them the whole truth. After learning this, they apologize to Hori and leave.

4. In Sickness and In Health (Episode 4)

In episode 4, Hori falls sick with no one to care for her as Shota went to school. She gets reminded of the time when her mother had to go to work despite Hori being sick. She wants someone to be with her. When she opens her eyes, she sees Miyamura caring for her.

While trying to get her food, Miyamura is stopped by Hori who hallucinates and sees Miyamura as her mother and asks “where are you going”. Miyamura assures her that he won’t go anywhere unless she tells him, and that she should get some rest.

In episode 6, Hori and Miyamura experience their first kiss. Miyamura’s friend Shindo won a lot of candies and wanted to share it with the two and asked them to come over to his place. Shindo’s girlfriend took all the normal flavored candies, so the trio were trying out other unconventional flavors.

Hori ate a clay flavored candy and while Shindo was looking away, Miyamura kissed Hori. He also stole the candy from her mouth. The scene is a very innocent portrayal of affection and often seen at the beginning of a relationship.

In episode 7, Miyamura had to go out of Tokyo for a few days with his family. Incidentally, he forgets his phone charger, could not communicate with Hori for five days. During this time, Hori is missing Miyamura, although she does not say it out loud.

The scene captures the longing and the worry both have for each other. When she meets Miyamura, she hugs him and says that she never knew five days were so long and that she missed him dearly.

In the same episode, we can see Hori’s friends telling her that if Hori continues to watch horror movies,  Miyamura would eventually leave her as he does not like those movies. They added that Miyamura would not find Hori cute as well.

Keeping this in mind, when both are watching a horror movie, Hori tries to act scared and hold his hand, but this scares Miyamura more than anything and both end up screaming.

This is a very comic scene that makes the viewers laugh out loud. When asked, Hori explains what she was trying to do. Miyamura assures her that he would not leave her, he fell in love with her and not some other “normal girl”.

It is a beautiful portrayal of the panic that surrounds couples that the other would leave due to some reason or the other.

In episode 8, Hori is painting Miyamura’s toenails. At whim, Miyamura keeps his foot on Hori’s head. He apologizes and says that he felt the urge to do so and thought that Hori would get angry.

On the contrary, Hori said that she wanted him to shout and yell at her like he did with his other friends. She wanted Miyamura to be more dominant and free with her. This is quite hard for Miyamura as he is timid, but he tries to do so for her sake.

This leads to a series of hilarious scenes where Miyamura yells at Hori. He feels bad, but when he sees Hori’s delighted face, he thinks to himself that he would try to do it to make her happy.

9. Spending the Future Together (Episode 9)

Episode 12 begins with the advent of Christmas celebrations. Miyamura is busy helping his family’s cake shop and could only be there with Hori’s family while delivering their cake.

After Miyamura delivered them their cake, Hori offers to walk with him for a while, where Miyamura says, “let’s get married”. To his surprise, Hori says yes to him, where both wish to make each other happy. This is a scene that the viewers were most happy about that they will get to spend their future together.

Episode 13 deals with the graduation ceremony of the batch. All have mixed feelings about leaving school and the memories behind. All the characters have made developments with their family and friends.

They take photos with each other to cherish as sweet memories. Miyamura thinks about how his life has changed due to Hori and that he is no longer a gloomy person without friends.

The anime ends with Miyamura thanking Hori in his mind and with the strong desire to always make her happy. He ponders on what to give Hori and comes to the conclusion that he will give her a cake with lots of cream, which happens to be her favorite thing.

The anime shows the bonds that a teenager has during his school years. The friendship, love, importance of family and the unknown future that awaits them. It beautifully captures the reality and the different situations that occur during the final year of school.

The anime was very popular as most could relate to it, having gone through the same at some point in their lives. The sweet high school romance that bloomed out of friendship along with various comic elements made this the most suitable anime for all generations.

We are certain that the viewers watched themselves in some character or the other, while reminiscing the school days and remembering the school friends with much fondness.