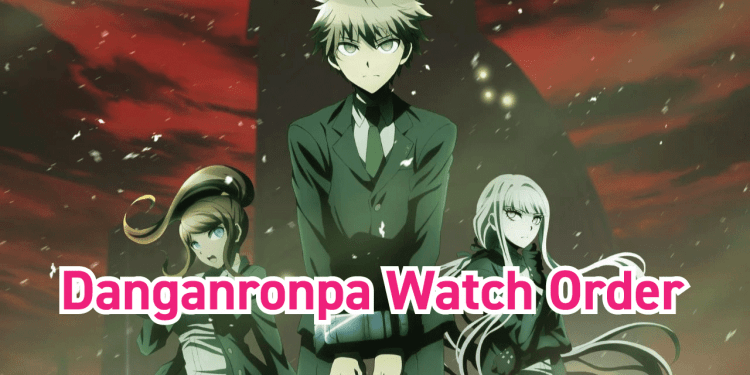 Follow our Danganronpa Watch Order before you jump right into the anime!

Dangaronpa anime provides you with an immeasurable experience. It depicts the story in a pretty reliable way considering all the reviews from the people who had played this game.

It consists of 36 Episodes in total that is also can be expressed as three seasons. If you’re looking for a short anime with a good pace and thrill, then this one is right up your alley. With tons of action and mystery elements, it keeps the viewer on the edge of the seat.

So, if you’re wondering how to watch Danganronpa in the correct order, we’re here to guide you on the right path. Make sure to check out our whole Danganronpa watch order to get a clear picture.

In the Danganronpa watch order, the first anime you need to watch is Danganronpa: The Animation. It is the very beginning of the story that sets in Hope’s Peak Academy.

If you haven’t played any games related to this anime, that’s fine too. Just go on with this anime, and you’ll be able to enjoy it.

After you’re done with the first anime, the next mission is to explore this twelve-episode anime titled “Danganranpa 3: Future Arc.”

Unlike the first anime, I liked this better, and it covers most of the issues gamers faced while watching the first one.

So, from our Danganronpa watch order, we recommend this title to be checked out right after the first one.

Yeah, you’ve heard that right. Despair Arc mostly features the backstories of characters, and it sure is a surprise to the fans.

However, once you’re done watching the second anime (Future Arc), we suppose you need to jump right into the Despair arc to experience a part of despairs that the characters portray.

Compared to the previous parts, this part has some amazing scenes which even gamers who played Danganronpa would like and appreciate. And the animation gets better and better with each part.

If you’ve made it until the Despair Arc, then the anime wants to show you a glint of hope with the Hope arc. In our Danganronpa watch order, we recommend you to watch hope arc once you’re done with the third anime.

I have no idea what the title is, at least that’s what I would like to say but it would be awkward to do that after watching the whole series. Even though it is an OVA, you mustn’t think about skipping it.

It’s more like a clear conclusion you’ll get after finishing the four arcs of the anime. So, make sure to watch this OVA and do that after you’re done with the above four arcs.

If you’re willing to get a whole new experience, then you should check out the games and watch this anime accordingly. Here’s a quick guide of Danganronpa watch order that includes both anime and games.

If you have an interest in anime gaming, make sure to follow the above table containing the Danganronpa watch order and get it through the right way. And as to the famous opinion on whether the anime is worth watching or not, know our opinion and decide for yourself.

Should You Watch Danganronpa Anime?

Absolutely Yes! It might be a contradictive opinion but I’ve enjoyed every minute of it. It was intense and anxious all the time making us wonder what’ll happen next. So, it’ll definitely be a good experience and you need to watch it for its stunning animation.

In any way, we would suggest you follow the watch order comprising both the games and anime. If you can’t afford to play the game, then you can simply watch the gameplays on Youtube.

Since we’re done with our Danganronpa watch order, we suggest you again to play the games if possible. Watching the anime alone is fine too but don’t you want the ultimate experience?

So, overall, it will be a good thriller and makes you enjoy every minute of it. We hope our post helped in some way and good luck with your watch. Feel free to leave a couple of words on the post in the comment section.

7 Intense Anime like Death Note That'll Mess with Your Mind!