by Hanumanth Reddy
in Reviews
2 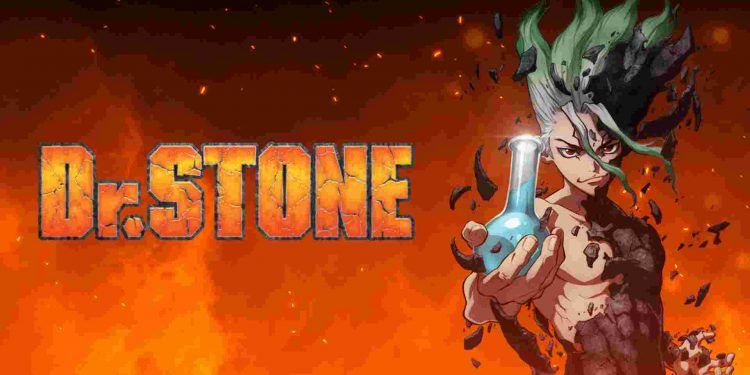 Lately, I’ve been thinking of watching an anime with a unique plot and which can entertain me with its brilliant thoughts. Well, I’ve found it.

Dr.Stone is one of the most exciting anime of 2019, and it is getting more popular over time. You might’ve have heard pure science. Hell yeah! You find a lot of scientific knowledge, but it’s not like your chemistry class or something. Let’s see the unique aspects only Dr.Stone has compared to the other anime series.

Dr.Stone is a Japanese manga series by Riichiro Inagaki, and Boichi took charge as Illustrator. It began serializing in Weekly Shonen Jump from 2017 to 2019, with a total of 13 volumes and still ongoing. The adaptive studio TMS Entertainment made into a 24-episode anime series.

One beautiful day, all of humanity petrifies by a flash of light. After 3700 years, high schooler Taiju awakens and finds himself lost in a world of statues. However, he finds his friend Senku who had been trying to find the cure for petrification. Together, they work to rebuild civilization with the Power of Science. Later, the story takes turns, making the viewers even more surprised.

The plot of Dr. Stone is quite remarkable. Presenting in a post-apocalyptic world, it continued to impress until the end at a good pace. And the reason for humanity’s petrification is still a mystery. That means it makes us wait for another season, its good enough to say how it impresses every time. Well, in the end, the storyline is one of the best aspects of Dr. Stone.

The characterization in the anime mostly focusses on the Protagonist Senku, but it does give the importance for every aspect when it is necessary. And even minor famous characters are developed as hell at the ending episodes.

The main character Senku always impresses with his intelligence and finds a way in any challenging situation. And characters like Tsukasa, Chrome, and Asagiri Gen make the anime even more likable. Each of them throughout the season has their motivation, backstory, and more reasons to engage with the other characters.

Dr.Stone has a good opening, which seems to fit with the way of anime, but the second opening is excellent. It describes the depth of the story at the end episodes. Besides openings, the background music perfectly suits the scenes. Tatsuya Kato, Hiroaki Tsutsumi, and Yuki Kanesaka composed the music for the series. In the whole series, due to the intenseness, the music isn’t noticeable. But Dr.Stone does have memorable soundtracks.

Dr.Stone has excellent animation and even some unique visuals. The environment is pretty, and the characters are beautiful. TMS Entertainment is the animation studio for Dr.Stone, known for their works on Megalo box and the recent remake of Fruits Basket. It is full of beautiful imagery.

TMS Entertainment should hold their heads high for the way they brought Dr. Stone to life. It’s not like this show has the best animation, but if you compare how characters design varies with the animation, you’ll notice the difference. The artwork includes the setting of anime in the post-apocalyptic world. That’s the way of the brilliance of TMS Entertainment‘s work.

When it comes to entertainment, this show does ten billion percent of justice. From the beginning episodes to the ending chapters, the humor doesn’t stop. The studio even managed to make some hilarious scenes with the way of animation like some scenes, such as with Suika, Kinro, Asagiri Gen, older man Kaseki, etc.

Not just humor, you find happiness and sorrow when the destined episode arrives. The fun takes place naturally in the conversation, and the way of presenting those scenes is fantastic.

The logic of Science!

Dr.Stone shines with its science and fun. You might’ve been thinking, what does science get to do in the stone age. But, that’s where the science evolved. From the fire to the cellphone, Senku builds everything from his astounding knowledge. There is a logical explanation for every scene. Maybe they will reveal the reason for the petrification of humans in the next season.

Throughout the series, Senku surprises with lots of amazing scientific inventions. While watching, apart of me says, why did I hesitate to experiment with everything in my childhood?. I still regret that. Each experimental scene in the anime is with a lot of research.

At the beginning of the show, there will be a glimpse of science we know. As you go through the episodes, you’ll wonder how pure science is if we learn from experimenting with everything. Senku, the protagonist, never fails to impress with his logical explanation and science inventions. Not to mention his haircut, though, We love these characters to create and achieve. And later they face a situation which we think there is no way, but they do find a way, after all, that’s how it works.

While at this point, the whole story can’t be finished in only one season since the manga is still going on. There will a second season coming this year as a result of the ending of the first season. I’m ten billion percent ready to enjoy the ride.

Dr. Stone is the most brilliant anime of recent times. Its plot is unique and well-executed. And the pace of the anime is pretty good. It is neither rushy nor slow-paced, and that's what makes it likable. The characters are well-developed, and the main character Senku is the best man. The animation is so unique, and the way they designed characters is so funny in some scenes. It does entertain you a lot, and the logic of science is brilliant in every episode. In my opinion, you can watch this anime at least because of its brilliance. So, don't miss it!

Re Zero Review: How Good is it?