Grave Of The Fireflies Review: A Timeless Film, Still Reverberates In This Wartime! 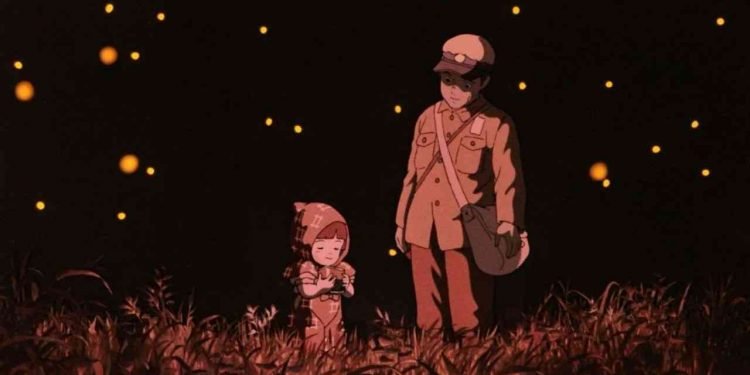 “Every war is a war against children” – Eglantyne Jebb.

Grave of the Fireflies is proclaimed to be one of the the greatest war films ever made by the Pulitzer won late film critic and historian Roger Ebert.

Grave of the Fireflies, a 1988 film scripted and directed by Isao Takahata, and animated by Studio Ghibli, is based on the 1967 semi-autobiographical short story by Akiyuki Nosaka.

Studio Ghibli has been renowned for lighthearted classics like Princess Mononoke, Kiki’s Delivery Service, and My Neighbor Totoro before. The arrival of the film changed this vision forever. You can know more about it in our Grave of the Fireflies review!

Grave of the Fireflies Review!

Nosaka’s adoptive father died during the firebombing, and his younger adoptive sister Keiko died of malnutrition in Fukui. The story was written as a personal apology to Keiko. Isao Takahata composed the screenplay. The story sets in the city of Kobe, Japan.

The film tells the story of two siblings, Seita and Setsuko, and their desperate struggle to survive during the final months of the Second World War. The theme of the film/story represents fireflies, who get very little time to live, and depicts that happiness is about a few moments in life.

Though the story was remarked by most people as the saddest or most tragic film, we believe the story is not portrayed as melodrama, but in a neorealist tradition. Roland Kelts, the author of Japanamerica, noted this film as tragic but “mesmerizingly beautiful”.

Nosaka Akiyuki, who was a teenager at the time of WWII, whose younger sister Keiko died of hunger and whose life has been shadowed by guilt, his burden reflected clearly in his story. Every detail of the story and the characters’ execution is quite reasonable. The book is well-known in Japan.

This story is not the usual material of animation. But we believe for Grave of the Fireflies, the 1988 animation was far better executed than the 2005 film. Animation allowed Takahata to concentrate on the essence of the story, and he could beautifully escape the visual realism.

Even though the film delivered a huge emotional knock with those subtle visuals as our imaginations got the chance to play more. As his animated characters were freed from the literal facts of real actors, more easily we could associate with the characters.

One of the greatest aspects of this film is its cinematography. Silence and patience were used to determine the flow of the story. Shots were held slowly, characters were glimpsed for long moments, and the atmosphere and nature took time to establish themselves and created an impact on the audience.

The timing and the use of silence in a sequence where they find a dead body on the beach is evidence of that. There is another sequence in which Setsuko prepared ‘dinner’ for her brother by using mud to make ‘rice balls’ and offered those to her brother while she was on her deathbed.

Japanese poets use “pillow words” that are halfway between pauses and punctuation. The great director Yasujiro Ozu is popular for using “pillow shots”, a detail from nature, to separate two scenes. Grave of the Fireflies used them, too, to create such poetic visuals.

Individual moments exhibited the amazing beauty of the city, which contradicted the mood of the film and heightened the catastrophe. One reference of a night when the children were catching fireflies and using them to illuminate their cave; the next day, Seita found his little sister carefully burying the dead insects, as she recalled her mother was buried and that moment hit Seita and the audience as well.

Studio Ghibli is renowned for its evocative landscape drawing. The characters are typical of much modern Japanese animation, with their enormous eyes, childlike bodies and features of great plasticity (mouths are tiny when closed, but enormous when opened, we could even see Setsuko’s tonsils while she cried).

This film showed that animation produces much more emotional impacts than a real film, not by reproducing reality, but by simplifying and heightening it. This film proved that animations are about ideas and not experiences.

Michio Mamiya composed the music for this film. Mamiya’s interest in Japanese folk music led him to compose several choral works incorporating traditional elements. He is particularly noted for his opera: his Narukami (1974) “won a Grand Prix at the Salzburg Opera Festival“.

The tragic melodies made for this film by Michio Mamiya enhanced the tone and the progression of the film so reasonably. As Japanese culture was portrayed in this film, it was well complemented by Mamiya’s music.

This film/story teaches us that war doesn’t do any good to anyone except political power. We still are living in wartime, and each of our worlds has been affected by the war directly or indirectly.

We believe you people also have not recovered from the ongoing war yet, which started in February this year, or we should say a long time before that. Grave of the Fireflies is a powerful classic of all time and will remain a discussible film until the evil war perishes from our planet.

Big News! Demon Slayer isn’t Over Yet, A New Epilogue is On The Way!