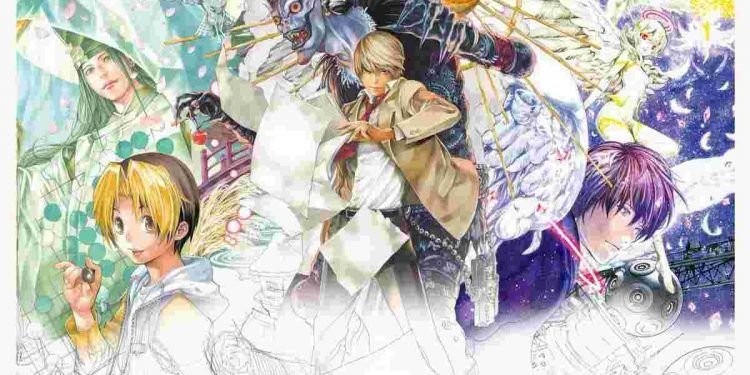 It’s been 14 years since the Death Note manga ended in 2006. The Death Note manga -related content we’ve had was a one-shot in February 2008. Its release was the part of the hype for the film “L: Change the world“ that came out in the same month. The movie was advertised along with the one-shot on the magazine cover along with the picture of L. Since then; there were no extended chapters of manga or another season for the anime. However, the one-shot was republished for the first time in Japanese and released in 2016.

In 2019, the announcement of the new Death Note one-shot written by Tsugumi Ohba drawn by Takeshi Obata was a surprise for the manga lovers. It is destined to run in Shueisha’s Jump SQ magazine in February 2020. It was announced that an 87- page one-shot would be published and available on sale in Japan on February 4. Now the cover illustration has been revealed by the artist Takeshi Obata, and it is unique. And the releasing chapter will have a colored center page.

The first ten pages of the new chapter were initially shown at Obata‘s exhibition. And there are going to be three new debut characters in the manga:

C- Kira is a character who is expected to use the Death Note that belongs to the Shinigami, Midora. And the Shinigami King is the ruler of the Shinigami realm. Though he is never shown in the main series, he is the one who gets to decide the distribution of Death Notes.

The unique teaser features, Once again, Ryuk‘s Death Note, falls into the earth after the events of the original manga. And the story is going to take place three years after the case of Kira (Light Yagami) is resolved. With the exciting new characters and plot, one-shot will give an excellent introduction to the upcoming chapters.

Hunter x Hunter : 5 Remarkable Reasons Why You Shouldn't Miss It!

What is Moon Breathing in Demon Slayer? [Explained]

How to Watch Naruto: The Best Guide You’ll Find Today!