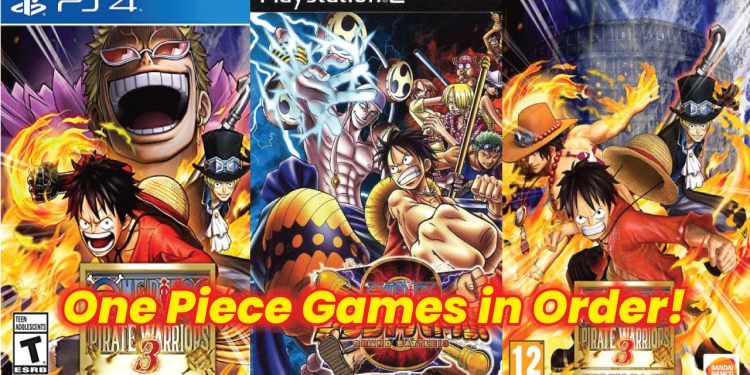 One Piece games have been a major part of its franchise and a lot of anime fans who love gaming eventually play them. But do they play it in the right order?

It doesn’t matter which game you play as long you watch the anime. But if you want to have extreme entertainment from One Piece games, an order is essential.

So, here we come with the list of One Piece games in order that might help you in boosting your experience.

One Piece Games in Order!

1. One Piece: Become the Pirate King

Released on July 19, 2000, this game is the first one to come out from the franchise, so you obviously need to play this first. It follows the events of the East Blue Saga.

An action RPG game that sets after the events of Grand Battle and also introduces the formed pirate crew of Luffy. It mostly covers East Blue Saga but worth the play.

Concerning the events that happen after the formation of Luffy’s crew, they set on the sail to new destinations. This part is mostly fun and has its fair share of action moments.

One Piece: Grand Battle is the second game according to the storyline but the first in the series that includes fighting games. It adapts the story from Whisky Peak Arc.

Grand Battle 2 is the second in the Grand Battle series and also a direct sequel to the game One Piece: Grand Battle. The story follows the events of the Arabasta Saga.

One Piece: Grand Battle Swan Collloseum is a spin-off to Grand Battle! 2. So, you can play it anytime, but you need to play the Grand Battle series before getting into this one.

7. One Piece: Legend of the Rainbow Island

An action RPG game includes an action-packed journey of the crew after they set sail to a new destination. It covers the story between the Loguetown Arc and Arabasta Arc.

Treasure Wars is a different one than the previous games as it introduces the players to a board game. In this game, the player chooses a member of Straw Hat Pirates.

The main goal is to find a special item before the opponent does. Overall, it is a pretty fun-to-play game, and you can play this game anytime instead of in a particular order.

As the title suggests, it is a sequel to the Treasure Wars that developed by Bandai and released one month after the prequel.

One Piece: Grand Line Dream Adventure Log came out in 2002, and it is the final game compatible with the original Game Boy. This game follows the storyline from Loguetown arc to Drum Island arc.

One Piece: Treasure Battle is a 4-player fighting game, and as per the timeline, it is best to play after Grand Line Dream Adventure Log.

This game follows the events of the first arc from Baroque Works Saga. It was a Japan-only game when it was released, but everyone can play it now.

This PS1 gem was released late into the PlayStation’s life cycle, and you can either play it after The King of Berry or skip it to play later. It is based on a filler arc from the One Piece anime.

Following Grand Battle 2, the third one brings you an enhanced version of the game along with new characters, skills, etc. It unfolds the events of the Sky Island arc.

16. Fighting for One Piece

“Fighting for One Piece” is a 2D traditional fighting game that follows the main storyline. Although the events might not be canon, you can play them for the story.

Made for PS2, One Piece: Pirates’ Carnival adapts the elements from the Water 7 Arc. It consists of a game that allows up to four players to compete in a dozen mini-games.

One Piece: Unlimited Adventure is an adventure video game that adapts the story from Water 7 Saga. It has up to 44 playable characters to keep you entertained.

One Piece: Unlimited Cruise is actually compiled of three games, and each of them follows a storyline after Unlimited Adventure.

One Piece: Gigantic Battle is one of the most important games in the series as it focuses on the Sabaody Archipelago arc and the Marineford arc. It also contains some content from previous arcs.

As Gigantic Battle focuses on the Marineford war arc, the second game takes the storyline into the new world where Luffy gets back stronger after a couple of years.

This one is the fourth game of the Unlimited series, and you can play right after the New World game. Although it doesn’t give much importance to the storyline, it follows similar gameplay as the previous ones.

You can also play One Piece Pirate Warriors series as most of the games follow the events from the manga.

Well, this list will help you go through the One Piece gaming order, and most likely you’ll understand the storyline easily.

Although there are more than 30 games in the franchise, excluding mobile and promotional games, these 24 games are all you need.

So, we hope you’ll have a good time playing the games and if you have any doubts regarding the gaming order, feel free to let us know through the comment section below.