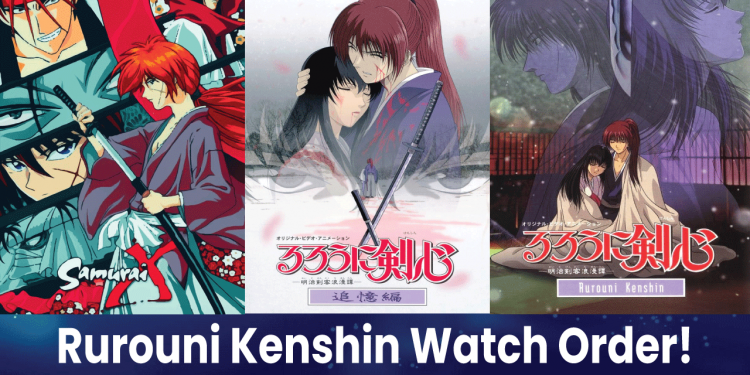 “You believe that the strong exist to cull the weak. To use them as food. But you are mistaken……The strong exist, not to feed off the weak, but to protect them!”

It was at this moment you knew that you’re about to view one epic anime series. Rurouni Kenshin isn’t a typical anime; instead, it provides a generic feel with every episode. So, you’ve made the right choice in choosing to watch this.

But if you’re going to watch it, we recommend you do it the right way. So, here’s the Rurouni Kenshin watch order guide since you’re wondering how to watch it anyway.

Rurouni Kenshin is the first part of the series comprising 94 episodes in total and ran from years 1996 to 1998. It introduces the characters and the world you’re about to view in this epic adventure.

So, if you’re thinking of watching it in the right order, then make sure to follow our Rurouni Kenshin watch order guide and watch this part to get a better understanding of the story.

Samurai X: The Motion Picture is a movie and a sequel for the first part, Rurouni Kenshin. It sets after the events of the war of Tokugawa Shogunate and it also has its share of action scenes.

Although it is a series containing 4 OVA episodes, it is related to the story by covering the unanswered history-related concepts from the previous parts. So, you need to watch this one too.

Yet another part with 2 OVA episodes, but we recommend you watch it since it gives the best animation for the audience. Although it is a non-canon, you can enjoy both episodes.

If you’ve heard a lot about the show and its history, you should watch it in the historical order:

Well, these are the two orders you can view the anime, and if you loved it wholeheartedly, you might as well try its live-action adaptation movies.

Till now, only three movies are released, and the remaining two will be out in no time. So, if you can afford to spend time watching these movies, it would be worthwhile.

1. The final arc and the actual ending weren’t on the anime. So once you finish watching the anime or Episode 63, you can refer to the final volume of the manga.

2. “Trust and Betrayal” and “Reflection” aren’t a must-watch since they’re OVAs, but with the art and animation, you definitely have to check them out.

3. There is also a 2-Episode OVA (Rurouni Kenshin: Kyoto Arc) you can watch if you feel like wanting more, but we wouldn’t really recommend it, though.

Rurouni Kenshin will be one of the unique anime series you’ve watched in your life and it is definitely worth it. So, just follow our Rurouni Kenshin watch order guide and enjoy your quality time.

Did you get a clear picture of how to watch Rurouni Kenshin anime? Let us know what you think in the comment section below.

Top 25 Reincarnation Manga with OP MC You Need to Read!

Your Name: A Visual Masterpiece!

The Only 7 Webtoons like Sweet Home You Need to Read!