What could be the Strongest Pokemon Ever to Exist? 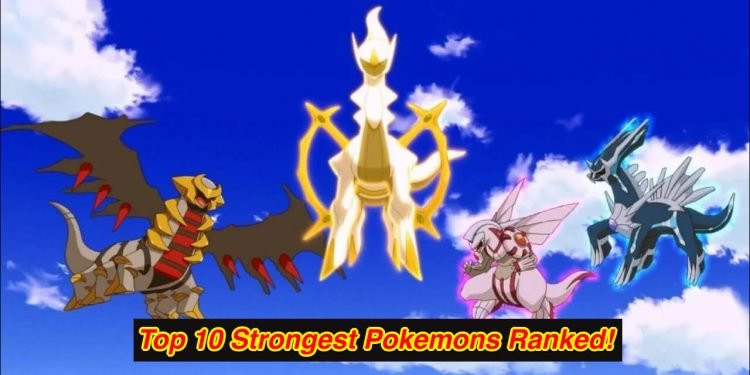 Ever since their introduction in 1996, the Pokemons (or Pocket Monsters as initially named by their creators Satoshi Taijiri and Ken Sugimori) have been a go-to favorite for video gamers.

Over the years, the franchise has branched out into anime (movie and series), manga and even VR. With around 800 powerful pokemons in existence and the various categories or types of Pokémon available in this wonderful universe, the battle to be the top 10 strongest characters in Pokémon is a close one.

Today we ranked the top 10 strongest Pokemons according to their power, abilities, and effectiveness against other Pokemons.

This dragon type extraterrestrial Pokemon is clearly the tallest of the pokemons. The raw form of galar energy being its ideal source of power, this colossal poison pokemon can absorb the energy surrounding itself to cause the Dynamax event (distorting space to change the physical form of a pokemon).

Often considered an extraterrestrial pokemon, the legend around Kyurem speaks of a time when there once was the strongest of the pokemons who split themselves to become the embodiment of light and darkness – Reshiram and Zekrom.

Kyurem is believed to be the absence of both the light and dark sides of the universe, and has the power to fuse with either of the sides to become one of the strongest pokemons with devastating levels of power.

The overlord of the sky, Rayquaza, is a huge serpentine pokemon. The strongest of the super-ancient trio of the Weather Trinity, Rayquaza can assume the form of Mega Rayquaza and acquire immense speed and durability.

One of the strongest pokemons in existence, Xerneas has the rare ability to give eternal life to any living form. Considered the embodiment of life itself, this powerful pokemon can also boost its stats up during attack, much like Yveltal.

Zygarde is the third member of the Aura Trinity and is generally seen as the protector of the ecosystem in the Pokémon universe. Zygarde has 03 forms – 10%, 50% and complete form – depending on the acquired pieces of which it comprises.

In case of any threat to the ecosystem, this legendary Pokémon assumes the complete form and in this form, it is considered more powerful than even Yveltal and Xerneas.

The first of the Creation Trinity, Palkia is one of the strongest among the legendary pokemons. Equipped with the power to manipulate space itself, Palkia equals its counterpart Dialga in strength and defence. Therefore, it is usually found in a dimension different than that of Dialga.

The result of genetic manipulation on the mythic pokemon Mew, this psychic type pokemon is a fearsome opponent even in its normal state.

Mewtwo mega-evolves into two forms – the incredibly physically augmented MegaMewtwo X and the MegaMewtwo Y with the unbelievable psychic powers to boot.

This powerful pokemon is a mix of the steel and dragon types. A member of the Creation Trinity, Dialga is naturally resistant to quite a few types of pokemons. Dialga’s special ability to manipulate time makes it a formidable opponent.

The battle of supremacy between the creation trio may be tough, but the name of Giratina will certainly emerge victorious.

This legendary pokemon is a deadly combination of the ghost and dragon types, having been banished to the Distortion World.

Who could be considered the strongest of the Pokemons apart from the creator of the pokemons? The mythic pokemon Arceus was revealed to the world of the pokemons in 2009.

Termed ‘The Original One’, Arceus is usually represented by equine features and is considered to be the creator of the pokemon universe itself along with the lake guardians and the creation trio.

So, these are the strongest Pokemons in the anime universe that we can think of. We’ve ranked them based on our experience and data gathered from official sources.

What do you think about the list? Do you think we got the accurate ranking? Let us know what you think in the comment section below.

The Best “Crest of the Stars Watch Order” Guide to Follow!