Tokyo Ghoul Manga Order: How to Read it in the Correct Order? 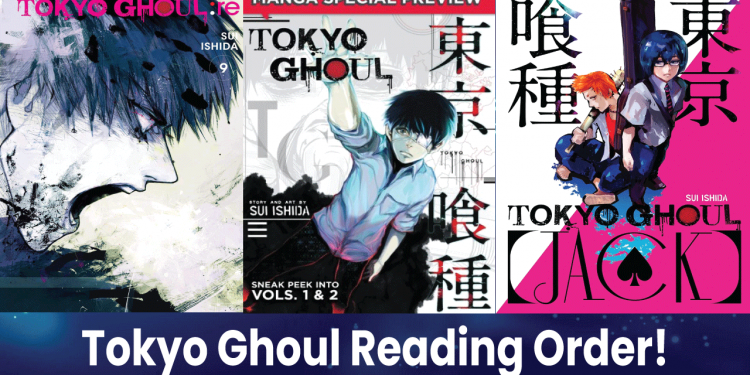 Tokyo Ghoul hits you differently when you read the manga after or before watching the anime. So, if you’re looking for a Tokyo Ghoul manga order, we’ll elaborate a perfect order to make your efforts easier.

But make sure to remember that this order is according to my preference and this way, I loved it wholeheartedly. If you want a simple order, we’ll make sure to provide you at the end of the post.

This original gives the perfect introduction to each character and builds up the anticipation for the sequel you’re going to read once you’re done reading this one.

Tokyo Ghoul: Joker is a single chapter that takes place between the original and the sequel. Since it is only one chapter, I think you can afford to read it before moving onto Tokyo Ghoul: re.

Now here’s the sequel and most important one on the Tokyo Ghoul manga order. Once you’re done reading the single chapter that takes place before this, you’ll know the truth behind everything that happens in this manga.

So, make sure to read this one before moving on to any side stories or novels. And also note that the order you’re witnessing is only for manga but not for novels.

To be honest, Tokyo Ghoul: Jack takes place before the original. But why do we read it at the end and not in the beginning? The reason is simple. This way, you can relate more to the characters.

Alternatively, you can try this one out after reading until chapter 31.5 of Tokyo Ghoul: re and later on, move to Chapter 32. But if it seems complicated to you, follow our Tokyo Ghoul manga order.

You can also read the manga in this order: Tokyo Ghoul> Tokyo Ghoul: re, and you’ll be fine. But the order we’ve provided above makes you learn more about the characters and eventually, you’ll be glad for reading it that way.

Tokyo Ghoul manga isn’t like any other manga I’ve read so far. If you’re thinking of reading it after watching the anime, then you’ll be amazed by how much the story differs in the sequel (Tokyo Ghoul: re.)

If you’re reading the manga without watching the anime or reading the novel, you can still enjoy it and with more excitement about what’ll happen next. So, don’t even think twice before getting into it because it is one of the best manga of all time.

In what order should I read Tokyo Ghoul Manga?

How many Tokyo Ghoul manga are there?

After going through a lot of searches, you might not be able to find a good order to read this manga. Since we’ve compiled a list with the easiest and most exciting order.

So, we hope you’ve found what you’re looking for and if you have any thoughts or queries on our Tokyo Ghoul manga order, make sure to drop them in the comment section below.

God Eater Season 2 Release Date: When is It?