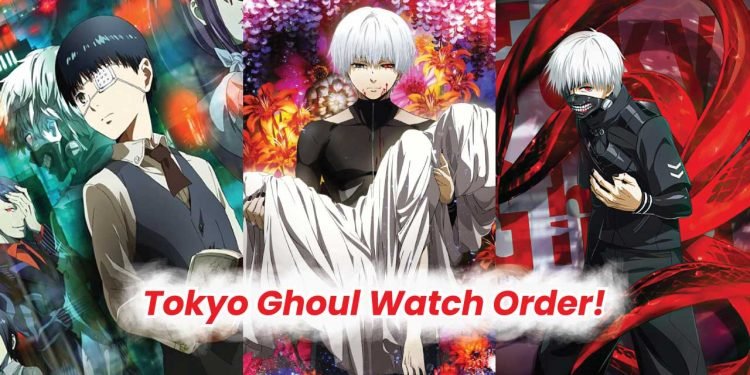 Although Tokyo Ghoul is a flawed adaptation of such a fantastic manga, it still holds its place in the hearts of anime viewers.

If you’re having trouble watching it, we’re here to guide you with our accurate Tokyo Ghoul watch order. So, let’s get started.

The anime’s first season is titled “Tokyo Ghoul” and is obviously the first part you need to watch. Although it doesn’t provide you much a deep story, the introduction of characters is inevitable.

For the ending alone, you can watch this season a couple of times or even more. The story moves at a good pace, and action scenes are pretty good as well.

Tokyo Ghoul Root A takes an unbelievable route from the first part. Although you’ll be amused by seeing the main character’s growth, there are some flaws in it.

Regardless, you can watch this second part, and probably you’ll love it. So, once you’re done watching the first season, jump right into this one.

Typically, you’d skip the OVAs and watch them if you can spare some time after completing the entire anime. But in this anime, it’s a different case.

This short OVA gives you the complete backstory of Arima (an important character in the anime). So, this one is a must-watch if you want to feel the anime only if Root A was this good.

Now you’ll get confused and have no idea how the story turned this way. But I think you should give it a shot anyway, and you’ll eventually find the answers.

Tokyo Ghoul: re contains two seasons, and these should be watched after the Root A or “Jack” OVA. We highly suggest you follow our Tokyo Ghoul watch order, though.

So, as you’d expect, the majority of the viewers are not satisfied with the anime and how the adaptation has gone wrong. But you can still revert it into an unregretful watch.

If you’re okay with reading the manga, we highly suggest you follow the recommended order mentioned below. It is the best way I’ve enjoyed the series and hopefully works for you too.

So, is Tokyo Ghoul worth it? I don’t know. I’m not saying it is entirely worth watching, or you should completely abandon it.

But the way this anime has impacted the audience, you should definitely give it a shot to know why it is so popular. That’s how I ended up watching the whole anime too.

If you’re still having second thoughts on the anime, you can follow our recommended order, and you won’t be disappointed in the least bit.

In fact, you’ll be having some of the best days of your life because the manga is so good and doesn’t complicate the story as it did with the anime.

I guess that’s all for the Tokyo Ghoul watch order. If you follow this guide, you won’t have to worry about ruining your experience. I mean, we got the correct order, don’t we?

So, if you have any queries regarding our article, feel free to let us know through the comment section below.

What is Baka in Japanese?: In the Best Way You’ll Understand!