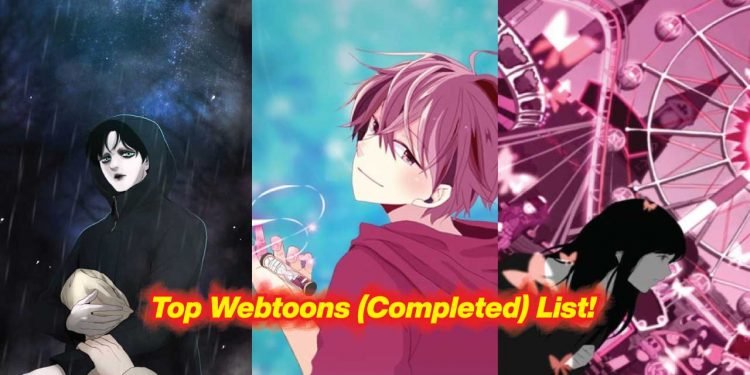 It’s not easy to wait every week for a new chapter/episode. If it goes on hiatus, it gets even worse. So, some people rather prefer to read some good completed webtoons than ongoing ones.

Are you one of them? And are you looking for some amazing completed manhwa/webtoons? If so, we’ve got you covered with our article. Let’s get into it, shall we?

The story takes place in a world where children are born under gods. Children born under weaker gods have no equal rights and must get a job after middle school.

While children under stronger ones train in high school and can also grant a wish for an equal price. Leerang turns back time and faces the consequences with it. How can he reverse his wish?

Seriously, I’m surprised how this manhwa isn’t much popular yet. Right from the start, it gives you a lot of hints, but at some point, it gets totally unpredictable.

The flow of the story is impressive and goes well with the title. An amazing story with an unpredictable execution, and overall, the author nailed it to perfection.

Sia Lee, a modern-day vampire, runs away from her home to enjoy life to her taste. She absorbs energy from the human body by touching instead of drinking their blood.

When she meets Jiho, a person with Mysophobia (fear of dirt and contamination), she gets interested in him and desperately wants to touch him. How will this story turn out between these weirdos?

I’ve been reading romance webtoons for quite a while now. But only a few managed to pull my heartstrings. UnTOUCHable manhwa is undeniably one of them.

Although it starts off with a light theme, it goes deeper into the story while unveiling a few mysteries. The main characters make you love it over time, and you’ll definitely enjoy every bit of it.

The story sets in a world where werewolves are viewed as lowly things by humans. But soon, they begin to gain some basic rights and attend school with their masters.

Hana and Haru are human and werewolf, respectively, with a master-slave relationship. They both fall in love with each other, even though it’s against the rules. How will this story end?

Although it would be one of the heartwrenching webtoons you’ll read, I would highly recommend it. The hardships they face and the adorableness they show on screen is so beautiful.

The realistic portrayal leaves you speechless throughout the manhwa, and the story is simply unforgettable. I’m pretty sure you’ll love it through the very end.

Yoon Ah-ee doesn’t have parents, and she struggles every day to support herself and her sister. But she had a dream since her childhood: to become a magician.

But after an encounter with a real magician at a theme park, she decides to follow her dream no matter what. With her current situation in life, how many obstacles will she have to face?

Probably the only term suitable for this manhwa is”A Realistic Masterpiece!” It’s extremely realistic, and almost all ages can relate to the characters and the storyline.

The artwork is brilliantly done. In fact, I love how it combines both normal art and real images of certain situations. It also has its OST, and it’s absolutely fantastic. Make sure to listen to it while reading.

When an alchemist loses his family, he decides to create one. He mutates corpses to form one, and he succeeds, but it misses one part: the heart. Soon, the alchemist dies, and a few thousand years have passed.

When this creation meets a girl named Jane, a writer, he begins to live with her in exchange for telling his story. In the process, he learns how to become a man, and Jane’s life changes.

Winter Woods is one of the best reads I’ve ever had. The plot is exceptionally good, and as the story moves forward, you can see the characters grow and change.

The art is fantastic, and the emotions displayed throughout the story are just mesmerizing. If you haven’t read this unique, completed manhwa yet, you better do it sooner or later.

Within a mysterious coffin from an abandoned building, Rai wakes up from his 820 years of sleep. He seeks out his loyal servant Frankenstein, and it turns out to be he’s the principal of Ye Ran High School.

To understand the modern world, Rai joins the school as a student. But some unresolved conflicts surge from the past, and he’s left with no choice but to protect the people he cares about with his prowess.

This Shounen manhwa has set a standard for overpowered main characters’ subgenre. The first and foremost thing you’ll be loving in this one is its artwork. It’s simply splendid!

If you’re hesitant at the first couple of chapters, try to give it another go so that you won’t be regretting of missing out on this little treasure. In addition to all these, it is a completed manhwa.

Although you can treat your loneliness, depression and anxiety with regular therapy, Melvina’s Therapy deals with something even deeper and creepier.

Unlike normal therapy, Melvina’s patients become worse with her treatment and soon, they discover the darkest secrets hidden in the deepest parts of their minds.

Even though most of the manhwa shows you a bunch of horror stories centering around Melvina, all of them get connected with a single overarching plot.

The meaning behind each story, the execution, and the art is just amazing. To put it simply, a well-written story with brilliant execution. So, it is a completed webtoon and a must-read.

With an excellent sense of taste and smell, Lucy loved the food of the restaurant named Dimanche. But one day, the taste suddenly changes, and she discovers that the kitchen staff has changed.

Without knowing the identity of the previous chef, she gets sad, but by sheer coincidence, she discovers two of the staff members at a random restaurant. She begins to gather the old chefs to rediscover that “perfect taste.“

When I first read this manhwa, I had no words to explain. It was fabulous! The storyline, the characters, and the main theme being around food sparked my interest.

The way they related everything to the food, pacing, and how they made it mysterious is truly impressive. I feel like I should read it again someday.

Wild’s High is a place where Wild’s League is held. It is the most popular event in the country, and teenage girls fight brutally there. Now it changed from an all-girls high school to a mixed-gender one.

Song Jae-Gu comes from a poor background, he has been given a full 3-year scholarship, and he wants to get successful. But what if his encounter with the Queen of the School, the champion of Wild’s League, changes his life?

I can’t say this is the best webtoon out there, but it could end up being one of your favorites. The action scenes were great, the art is decent, and the story is definitely impacting.

Although the ending could’ve been better, it wasn’t bad. The way characters interact is awesome, and if you ask me, it is worth giving a shot.

Seon Jin never had a peaceful life at school. Due to his weak appearance and disabilities, he constantly gets bullied. But at home, he has it worse as he had to act as an unwilling accomplice to his father.

Although his father looks like a successful businessman, he is a serial killer, and his next target becomes a transfer student of Jin’s school. Now it’s up to Jin to choose what to do.

I really don’t need to write these couple of paragraphs to describe how good this manhwa is because a single word is enough for it. Bastard is a freaking masterpiece!

It’s not like it’s a unique concept. These stories have been done before, but the execution has never been so perfect. If you haven’t read Bastard webtoon yet, you’re really missing out on a lot.

We read lots of webtoons daily (we have read the most popular ones, so we read new chapters), and each day, we desire a new concept and the story.

We hope this list will help you find amazing & completed webtoon recommendations. So, do you know any other completed webtoons that we can add? Let us know what you think in the comment section below.

The Best “Fairy Tail Watch Order” You Need to Follow!