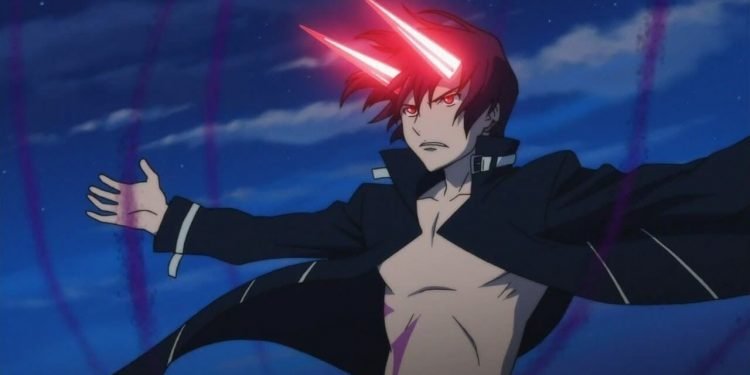 Most people watch isekai anime for the concept and world-building. However, numerous anime viewers love isekai anime with an overpowered main character.

It feels different when the main character gets special cheats instead of plot armor. People often discuss a lot about these anime on social platforms like Reddit.

So, here is the list of Isekai anime with op mc you need to check out right away.

Contents Hide
Top Isekai Anime with Op MC!
13. In Another World with my Smartphone
12. Cautious Hero: The Hero is Overpowered but Overly Cautious
11. Death March to the Parallel World Rhapsody
10. Ixion Saga DT
9. How Not to Summon a Demon Lord
8. Sword Art Online
7. Saga of Tanya the Evil
6. Log Horizon
5. Soul Land
4. Overlord
3. No Game No Life
2. The Rising of the Shield Hero
1. That Time I Got Reincarnated as a Slime
Concluding Op MC Isekai Anime !

13. In Another World with my Smartphone

Touya Mochizuki dies by the mistake of god and has been given a second chance in another world. He’s also given a smartphone that works well in that world, and so his journey begins.

It might not be the perfect isekai anime you always crave, but it has its fair share of moments and is worthy of calling an amazing isekai anime.

With a keen mix of all the aspects such as comedy, romance, action, adventure, etc., it never ceases to impress the viewer.

12. Cautious Hero: The Hero is Overpowered but Overly Cautious

Goddess Ristarte summoned a hero to save her world, and he is none other than Seiya Ryuugyyin. The only backslash is that he is overly cautious.

Cautious Hero is one of the few isekai anime with a good blend of comedy, fantasy, and RPG concepts. Although you might not find it as good as other isekai ones, it has its fair share of pros.

Satou is a programmer who’s working on a game, and suddenly he finds himself in another world. He’s on level 1 currently, and right at the moment, he witnesses a horde of lizardmen.

When he finds three “Meteor Showers” in his inventory, he uses one of them to save himself and unknowingly wipes out the whole horde. Now he’s leaped onto level 310.

The story of this anime is simple yet intriguing. Although it has a few plot holes, you wouldn’t mind it much with humor and other aspects.

As you can see from the plot, Satoru is one hell of an overpowered character, making it an isekai anime with Op MC.

The story follows Kon Hokaze, who goes to another world known as Mira, full of a mysterious force known as Alma. Soon he saves Princess Ecarlate and involves more in the struggle.

Ixion Saga DT is not like any of the isekai anime on the list. It is fun to watch in free time and also covers action moments.

In the end, it is an amazing isekai anime with Op Mc you must watch.

9. How Not to Summon a Demon Lord

The story follows a gamer who’s well versed in his favorite game with the character Diablo, a demon lord.

One day he gets summoned by two pretty girls to the same game, and he finds himself in the character of Diablo.

How Not to Summon a Demon Lord is a little controversial isekai anime with some ecchi elements. Besides that, you can find every bit of entertainment in it, including epic action scenes.

After all, the MC is the demon lord, and his abilities easily overpower others. Thus, it is a fantastic isekai anime with Op Mc in it.

In the year 2022, a virtual MMORPG game with Nerve Gear functioning was introduced and attracted many gamers.

Once numerous people logged into it, they soon found that they can’t log out. Also, the only way to log out is to clear all the levels in the game, and if they die in here, they die in real life.

Some people argue that SAO isn’t an isekai anime, but if you know the true meaning of the isekai genre, then you won’t deny the fact.

Regardless, this anime utilizes most of the isekai elements in the most surprising way, and the main character is overpowered as hell.

7. Saga of Tanya the Evil

The story follows a salaryman who gets murdered by a subordinate and later criticizes the existence of god.

He is soon reincarnated into a world as an orphaned girl in a world that is currently under the world wars.

Saga of Tanya the Evil is truly one awesome isekai anime. Though Tanya in this anime is completely different from the overpowered main characters, you’ve seen till now.

With her cold, calculating, and unempathetic personality, a fearsome vibe emerges in viewers’ minds.

Elder Tale was one of the most popular online RPGs, and one day, tens of thousands of players get transported into a world that resembles the game.

When I meant Op, it not only applies to the strength and abilities but in every way. The main character in the anime is incredibly smart and overpowered in his own way.

If you love watching isekai anime with Op MC with a game-type concept in it, then this one is for you.

Tang San is the prodigy of the Tang Sect, but unfortunately, he is forced to jump off “Hell’s Peak” after stealing the secret teachings of the clan.

Later on, he gets reincarnated into another world without magic, but it solely depends on mystical souls. Can he evolve in this world while his soul-spirit being the weakest of all?

If you’re into Chinese anime, then you might’ve come across this one. Even if you haven’t, now’s the time to witness such a masterpiece.

It has a fabulous main character along with a well-written story. The fantasy concept is used on a whole new level than the ones you’ve witnessed so far.

Veteran player Momonga stays in the game even in the last moments before it shuts down. However, soon instead of logging out forcibly, he is now stuck in the game with NPCs.

Overlord is an entirely new level of isekai anime shows you’ve watched until now. MADHOUSE studio has done a splendid job through the animation.

With the MC being overpowered main character in the virtual MMORPG world, you’ll witness more than enough epic battles that’ll thrill you to death.

Sora and Shiro are siblings who are geniuses of geniuses when it comes to gaming. One day, they’re summoned to another world filled with games to challenge the god.

Firstly, for the unique animation in this series, MADHOUSE studio deserves praise. If you have no expectations of this anime, this might even become one of your favorites.

Both the main characters (Sora and Shiro) are overpowered with their brains, almost never losing a fight.

2. The Rising of the Shield Hero

Naofumi Iwatani is summoned to a world along with other heroes to save it from disasters. However, being a shield hero, he is underestimated and gets betrayed by the princess of the Kingdom.

With nowhere to go, he leaves the palace to get stronger and become the Legendary Shield Hero who possesses incredibly overpowered abilities.

To be honest, I’ve never felt any isekai anime as marvelous as this one in terms of the intensity of the action.

With quite an overpowered Shield Hero, it presents you with an amazing MC journey and how his life changes.

1. That Time I Got Reincarnated as a Slime

Satoru Mikami, living an unhappy life, suddenly got stabbed by a stranger and reborn into another world filled with magic users. But as a Slime?

Rimuru Tempest is one of the most powerful anime characters, and in this way, he’s quite overpowered in the anime as well.

With an amazing start, this anime will entice you to move on to the next episodes, and you can’t help but watch the entire season in a day.

After thorough research and hours of writing, we have finally finished our list. We tried to include some unique ones on the list as well instead of routine ones.

So, make sure to read the complete article to get a clear picture and select a good one from the list.

Well, what do you think about the post? Let us know what you think in the comment section below.

One Piece Manga Order: An Accurate Guide for You!