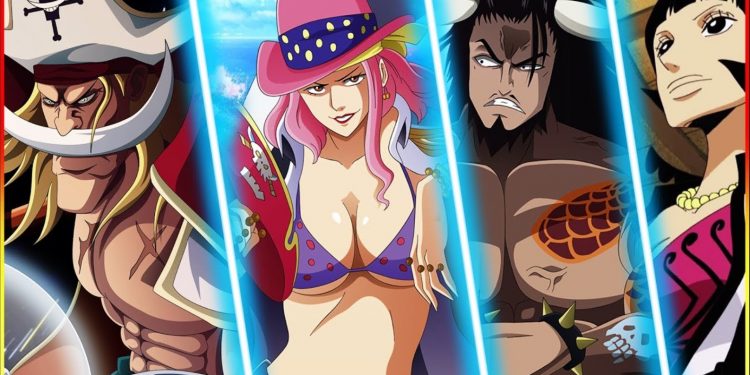 With Episode 958 of One Piece, we’ve heard a lot more about the legendary pirate crew “Rocks Pirates!” than we know. So, who are these Rocks Pirates in One Piece, and why are they known as a legendary crew, to begin with!

Like The King of the Pirates, Gol D. Roger, and his crew, Rocks Pirates were the strongest even before the rise of “Roger Pirates.” After 38 years of undefeated conquering through the seas, they finally disbanded because of different ideals.

Rocks Pirates in One Piece!

Rocks Pirates was formed by a band of pirates at Hachinosu Island, and they were dangerous to the point where they would even fight to the death on board.

Even the world government had to cover up their achievements to claim themselves as the world’s strongest military power. Eventually, Monkey D. Garp and Gol D. Roger joined together to defeat them at God Valley, which can’t be found even on the map.

Now, let’s look at the Rocks Pirates crew, and you’ll immediately know why it is a legendary pirate crew!

Rocks D.Xebec was the captain of Rocks Pirates and sailed the seas along with the crew. According to the historical records of One Piece, he was known as a vicious and incredibly ambitious man who dreamt of taking over the world.

He’s as strong as Roger and Whitebeard at their prime back in the days and also one of the Roger’s strongest enemies in the whole sea.

As we know, Whitebeard is a pirate whose power is feared through the world, and also, his fruit has the power to destroy the world. His bounty is 5,046,000,000 berries and renowned as “The Strongest Man in the World,” who have come close to acquiring One Piece after Roger.

Whitebeard has the highest bounty in the whole One Piece series after Gol D. Roger! We didn’t know the bounty of Rocks D.Xebec yet, though.

Charlotte Linlin is famously known as Big Mom. She is currently one of the Yonko and also the only female Emperor. Her bounty is  500,000,000 berries as of now.

The strongest creature in the world who didn’t even die when he jumped through the sky island is none other than “Kaido.” He is currently leading the Beast Pirates and ruling over Wano from the Shadows.

Also known as, Shiki the Golden Lion is the first prisoner ever to escape from “Impel Down.” He has many names including, “Flying Pirate,” and in Roger’s time, he also made quite a name for himself.

Although he fights like a Lion, his nature is more light-hearted and cheerful. Thus, he is also one of the Legendary pirates to sail alongside Rocks Pirates in One Piece.

Captain John was one of the legendary pirates from “Rocks Pirates,” and he was also famous for collecting various treasures all over the world.

Back in Thriller Bark ark, his corpse was used as a zombie by Gecko Moria. Even as a zombie, he never stopped drinking, and maybe that’s how legendary pirates like them live their lives.

Silver Axe was an incredible, formidable pirate, and we’ve also seen Sengoku mention it in Episode 958. Even after the Rocks Pirates split up, he made a name for himself.

Although we don’t know much about him yet, in the future, we hope Oda, manga creator, will provide more info about this legendary pirate. Thus, he is one of the pirates of the world’s most dangerous pirate crew.

Ochoku is also one of the Rocks Pirates with utmost popularity. After 957 episodes, we got to hear the name of Silver Axe, and I don’t know how many episodes we need to wait to hear this name.

The interesting fact about this pirate is that he is based on a real-life Chinese pirate named Wang Zhi. Thus, he ended up becoming one of the legendary pirates of Rocks Pirates in One Piece.

Rocks Pirates in One Piece Ranked According to Strength:

So, this is the information you need to know about Rocks Pirates from One Piece. Since One Piece has more story ahead, we’re sure they’ll be mentioned in upcoming episodes.

If you’ve read our article, you’ll get a clear picture of the crew, and we’re sure it’ll make the story easier for you in the future. So, what do you think about Rocks Pirates? Let us know what you think in the comment section below!

That Time I Got Reincarnated As A Slime Season 2 Finally Announces Release Date!