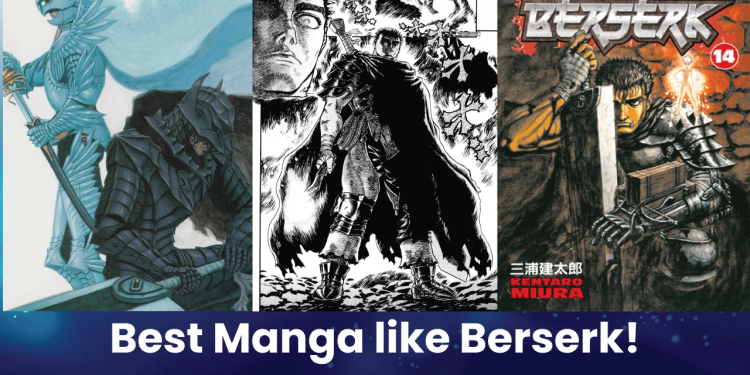 What makes a manga similar to Berserk?

I can say this without any hesitation. No manga is on par with Berserk with a dark fantasy concept and next-level action. Still, to get a similar feel/vibe to Berserk, you need to read these manga.

So, here’s the list of manga like Berserk that can give an immense pleasure while reading them!

Shinmen Takezo grew up in the late 15th century of the Sengoku era. He is always hated by the villagers since his nature resembles a devil.

At age 17, he runs away from home with his friend and joins the Toyotomi army. Later on, the battle with the Tokugawa clan marks up as his first experience and thus begins one epic journey.

Vagabond takes upon the historical and dark themes as the main base. Set in the Sengoku era, the world-building resembles a lot to that of Berserk.

The artwork is spectacular and very detailed, to be honest. It puts the reader in a trance state, and if it’s anymore you want, it is too much to ask.

Shin and Piao war orphans were born during the Warring States period in a poor village. They both work as servants in the Kingdom, and soon, Shin raises into the ranks of general. And the rest, you know, the epic is about to start.

Although Kingdom is a manga like Berserk, it feels more historical and realistic. They both share common themes like adventure, swordplay, and the main character, who gets strong from the lowest.

With passionate and tactical battle scenes, it feels somewhat unique from Berserk. Both Shin and Guts are pretty badass characters with their ungiving nature.

Dr. Kenzo Tenma is a genius neurosurgeon who made quite a name for himself. He is well respected by his peers and also got engaged to the daughter of the Hospital’s director.

But when Tenma is met with a choice to save an orphan who came earlier or the mayor who arrived later, he prioritizes and saves the child. Soon, terror takes up a form in the life of Tenma.

The settings of Monster and Berserk are quite opposite, to be honest. While Monster sets in the post-cold war, Berserk is set in the medieval era. But characters feel so similar just like Griffith, Guts, and Tenma, Johan.

These both are considered all-time masterpieces and if you’re looking for a manga like Berserk with a change of pace, then this is a must-read for you.

Thorfinn is born in a world where there is slavery and peace is just nothing but a myth. When he travels with his father into the seas, he witnesses a mercenary Viking named Askeladd kill his father ruthlessly.

Deciding to avenge his father, Thorfinn spends the rest of his life honing skills and waits for the day to defeat Askeladd in a battle and kill him like a true warrior.

Vinland Saga is not only one of the best seinen manga, but also one of the best anime to come out in the last two years. The art is very detailed, and the facial expressions are pretty eye-catching.

In addition to these, the revenge theme also makes it a manga like Berserk. If you remove the fantasy element from Berserk, you can witness Vinland Saga.

Claymore sets in a world that is overrun by monsters known as “yoma.” These monsters feed upon humans, and to exterminate them, an organization sends Claymores.

Most of the Claymores don’t care much about people’s lives except for the money. Clare, although she is a low-ranked Claymore, she lives her life only to avenge her mentor.

Firstly, Claymore and Berserk share a similar setting as they include Medieval Fantasy. Even the plot is so similar as it is based on the characters who fight against the odds.

With violence, gore, and a bit light-hearted theme, it is an amazing manga like Berserk that you must read.

The story centers around the eldest brother of the Sanson family, Charles-Henri, who is grown into an executioner. His sister, Marie lives a carefree life, and her first love gets killed by aristocrats.

Thus begins the battle between the ideals that will lead to the French Revolution. Read how this revolution causes numerous conflicts!

Both Innocent Rogue and Berserk focus on the themes such as revenge, politics, and morality. It also has as much gore and violent stuff that’ll give you the same experience as Berserk.

So, since you’re looking for an influencing manga like Berserk, then this one is for you.

A priestess who is young forms a party to go on dungeon hunting, and unfortunately, they end up in trouble they can’t deal with. The Goblin Slayer comes to their rescue, who lives for only hunting the Goblins.

I can’t say how similar this manga is to Berserk. Both have violent, gore, and dark premises, along with some magnificent action sequences. Badass main characters who make their opponents useless is also a thing in common.

Berserk doesn’t give much space to humor and light-hearted stuff, while Goblin Slayer features some innocent and funny characters.

8. Fist of the North Star

Fist of the North Star follows Ken, a man who gets betrayed by his closest friend in the middle of a Nuclear war. But Ken isn’t that easy to get rid of, and he returns stronger.

Firstly, the art styles are similar by presenting you with a dark look of drawings. Set in a dark world, both manga features some pretty badass characters with a revenge theme.

So, if you’re looking for a manga like Berserk with a completely different approach, then this one is right up your alley.

9. Blade of the Phantom Master

Munsu is an Angyo Onshi, who fights the evil in the country of Jushin. When Jushin collapses at the hands of evil people like arms dealers, smugglers, etc., he teams up with Chun Hyang to bring justice back again.

This manhwa is something else and indeed an incredible manga like Berserk. Both the protagonists fight against some awesome creatures and with only a single goal in their minds.

With eye-catching and quite intriguing artwork, this manhwa is sure to entertain you.

Gantz is a story about Kei Kurono, who dies but is surprisingly brought back to life in another body. Now he is forced to hunt down the aliens, and if he dies, the body will be replaced by another person.

You can fight many dissimilarities between Gantz and Berserk. But for one thing, I can say this is a lot similar to Berserk. While both settings are completely different, the reader definitely gets the point.

With Seinen’s concept and monsters, you can say that it did include some aspects similar to Berserk. So, make sure to read this one and also check out the anime, if you loved Berserk.

There you go! The ultimate list of manga similar to Berserk is done, and all that is left is for you to explore each title so that you can choose one.

If you loved our article, make sure to enable our notifications so that you won’t miss more exciting articles like this one. So, what do you think about our list?

Do you think any other manga should be on the list? If so, let us know what you think in the comment section below.

Baki Hanma Anime will be Launching on Netflix this September!

15 Best Manhwa Like Solo Leveling You Need to Read! [Updated]