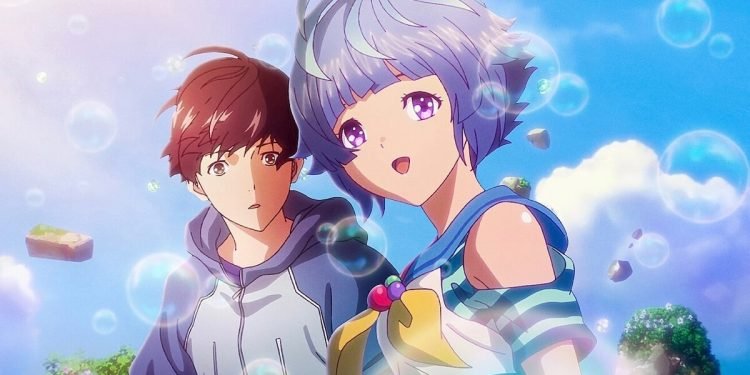 The latest product of Wit Studio, Bubble, directed by renowned helmer Tetsurō Araki, was released on Netflix last April after screening at the Berlin International Film Festival, before the theatrical release in Japan.

It has been acclaimed for its visual experience and stunning music, but equally criticized for lacking the depth of the story and the characters. We also have found almost similar pros and cons in it. Let’s find out in detail in our Bubble anime review.

It was written collaboratively by Gen Urobuchi, Naoko Sato and Renji Ōki. The story is based on Apocalypse and Post-apocalyptic phenomena. The theme of the story had great potential, but the reference to a popular Danish Literary Fairy Tale(1837) made the plot predictive.

In between providing a story of Selfless Love and Hope, and giving an experience of sci-fi and thrilling adventure, somehow the film couldn’t find a path. Though it started with an amazing exposition, it lost its momentum in the second half, with a predictable conclusion and depicting the story with repetitive scenes.

To disguise the lacking, a lot of tropes were used but couldn’t incite interest. Ultimately, the action-packed Bubble neither satisfied the people who yearn for a compelling and in-depth story nor entertained those who craved an adventurous sci-fi story.

Character Design was made by Takeshi Obata who is well known for his work in Death Note. So, undoubtedly, the design was great, but the development of the characters dissatisfied us just like the plot.

The film centered around the two protagonists, Hibiki and Uta (Means Song). The characters are also archetypal, just like the plot. The flat and underutilized characters couldn’t help to support the protagonists to enrich their journey.

The animation is one of the biggest strengths of this film, which was executed by Wit Studio. Wit Studio has been acclaimed a lot of praise for their previous works, such as Attack On Titan, Vinland Saga, Ranking Of Kings and several other works.

People will get a dazzling kaleidoscopic visual throughout the film. The camera fixes on the characters’ faces longer than usual, and the animation made their expressions appear so lively.

Wit Studio handled various colors and numerous frames incredibly and served us an exquisite visual experience, which was one of the reasons to sit back and watch the film.

Another best aspect of the film was its action sequences, which made us watch the film. The cinematography was done by Kazuhiro Yamada.

The plot was centered on Tokyo Battlekour, a playground of orphans in the abandoned post-apocalyptic Tokyo which is no longer the capital of Japan, to show the action-filled sequences.

Though the action lost its momentum while depicting the story, in the second half, it was performed amazingly throughout the film. One of the best scenes was executed stunningly by Hibiki and Uta, it was a thrilling jumping sequence where Hibiki was following Uta and finally, they performed together and Uta acquired the Flag.

The next best element of the film is its music. The music was created by Hiroyuki Sawano. Hiroyuki Sawano has earned his name through his remarkable work on Attack On Titan.

Each composition was beautiful, but the mind-blowing music of the opening theme, which was also used in the trailer, stunned us and induced us to watch the film.

Another best one was Uta’s Song/Song of Uta which was played during the exciting Run of Hibiki and Uta where Hibiki was following Uta. We believe these compositions have outrun his previous works and retained his name as well.

Bubble could only appease those who prefer a stunning audiovisual delight. The film had important components but lacked one of the best components, an impressive plot. It tried to handle several genres, like sci-fi, tragic-romance, and adventure-thriller; it tried to promote different interests to attract different audiences and eventually failed to handle them reasonably and couldn't satisfy any of them. Having several great talents and potential, Bubble couldn't give an expected result.

Made in Abyss Season 2 Confirms Its Release Date with a English Subtitled Trailer!