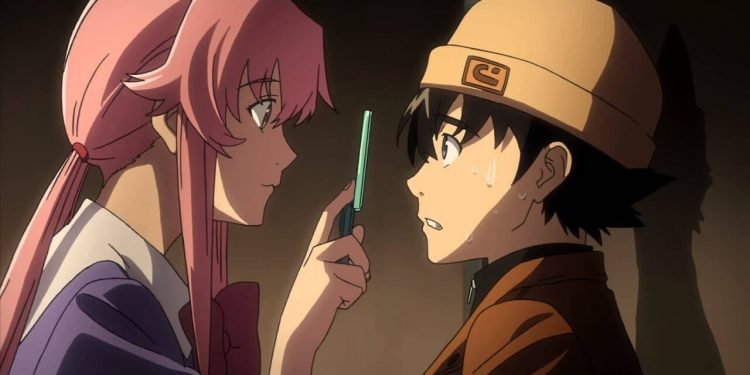 Future Diary was a spectacular ride with a clean blend of romance, thrill, gore, and trauma. Regardless of how disturbing it can get, we can’t help but love it. However, there hasn’t been another season like forever.

As of now, there is no official confirmation regarding Future Diary season 2 from the asread studio or franchise, even though it has been over a decade. However, don’t lose hope just because of it.

We might get another season, just like how we got the second seasons of unexpected ones like Classroom of the Elite and The Devil is a Part-Timer. So, will there be Future Diary season 2?

Will There be Future Diary Season 2?

To determine whether an anime gets another season, we need to consider three crucial factors: It’s popularity, past performance, and source material.

Popularity: Future Diary anime is among the best thriller anime shows and its popularity is quite immense. Almost every anime viewer would come across it at least once.

Past Performance: It refers to how the anime performed in the past, either through sales in numbers or international reach. Although we’re not sure on numbers, Future Diary’s sales were not small, both locally and international wide.

Source Material: Source Material refers to the source from where the anime adapted the storyline like manga, light novels and games. In this anime’s case, it is the manga. Unfortunately, there is no manga left to continue the storyline except a few spinoffs.

Possibilities of Getting Mirai Nikki season 2:

If we’re considering the things discussed above, it is highly unlikely we get another season of anime. However, there is chance of getting a reboot of Future Diary. By fixing a few plot holes throughout the anime and rebooting it makes much more sense than producing another season.

However, reboot would take a while since there hasn’t been any information regarding it either. So, we can’t expect anything for at least a few years.

As we mentioned above, Future Diary follows the manga until the end and leaves no story behind to prolong it to another season. However, there is a lot of material skipped from the manga to make it more dramatic.

So, if you want to connect well with the characters and story even more so than anime, it is highly recommendable that you read the manga from the beginning. We’ll link a source for you to read below.

As we mentioned above, there is no confirmation that Future Diary season 2 will be coming anytime soon. So, it is not logical to expect a teaser or trailer for the next season. However, if in case, in the future, the author decides to write a sequel, we’ll be sure to update it in here.

In conclusion, there won’t be another season of Future Diary coming soon. So, you can either read the manga for better understanding and connection with the story, or move on from the anime and find something else to watch.

So, if you’re interested in staying up to date with more seasonal anime updates, make sure to visit our Anime Next Season page.

Top 10 American Anime You Shouldn’t Be Missing Out!