6 Remarkable Novels like Martial Peak You Need to Read! 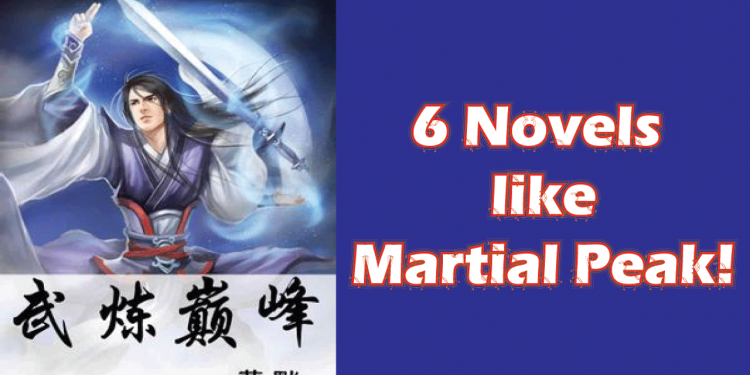 Martial Peak is an amazing Xuanhuan novel with not much filler stuff in the middle chapters. For its good humor, romance, and characters, you can read the chapters without any break.

So, if you loved it and looking for more novels like Martial Peak, then the list we’re about to provide will fill your void. Let’s dive in then!

Contents Hide
Novels like Martial Peak!
1. Pivot of the Sky
2. The Mythical Realm
3. Against the Gods
4. True Martial World
5. Immortal
6. Stealing the Heavens
A Word from Us!

The story follows Amon, a poor miner’s son whose life changes when he finds a marvelous gem known as “God’s Tear.”

Forced to face fate, he embarks on a journey to chase out the mystery behind the world of gods and magic.

Pivot of the Sky is well-written, and the world-building is very stable by utilizing the concept of Cultivation to the maximum extent.

I don’t know if you’ll find this novel much similar to Martial Peak, but I did feel a lot of similar vibes from it.

The story follows Ye Yun of Heavenly Sword Sect, who struggles to become the strongest under the Heavens from being a low-level servant.

The Mythical Realm novel has everything you need, including Martial Arts, Cultivation, Romance, Action, and many more.

Although it takes some time to get you into the story, you’ll be having a blast from later on.

Yun Che got killed in his previous life for possessing a heaven-defying object. In the next life, he faces similar situations but is he going to give up again?

Against the Gods is more like an improved and modified version of Martial Peak, except that the approach is quite different.

It has a badass main character, a good storyline, and, more importantly, captivating narration. So, you’re sure to find this novel similar to Martial Peak.

The story follows Lin Ming as he destroys Abyssal Demon King with his might, but an artifact previously sealed the demon king takes his loved ones into the space-time vortex.

Although the plot seems utterly different from that of Martial Peak, you can still read it and have fun as you did before.

The action scenes are well-narrated; the fantasy concept’s blend with Cultivation is fantastic. Thus, it is one of the novels like Martial Peak.

Zhong Shan has finally become immortal. In his attempt to conquer the world, he needs to establish a supreme army and dynasty to withstand heaven.

Truly, Immortal was one of the few Chinese novels that gave me such a beautiful and fantastic read.

Although it lacks a few aspects, it never fails to make you excited, and with every chapter, you can’t help but move onto the next one.

It does have similarities with Martial Peak, such as a badass MC, cultivation concept, and insane action scenes.

The MC in this novel gets transported to a fantasy world due to a calamity by losing his beloved teacher and best friend. Now he must become strong to avenge both of them.

Stealing the Heavens is a rare treat in this Xianxia world. Right from the beginning, it goes on introducing twists and turns.

With a great blend of action, mystery, and Martial arts, it is a perfect novel for people who are looking for novels like Martial Peak.

Well, it seems like we’ve reached the conclusion of the article, and this is one good list. If you loved Martial Peak and its aspects, then you’ll love these ones as well.

Even for the people who haven’t read many Chinese novels, these novels will suffice their leisure time and will definitely leave an impression on them.

So, did you find our article helpful? Let us know what you think in the comment section below.

All 11 Titans Ranked from Weakest to Strongest in Attack on Titan!